Too Soon for a Rally: Brazil’s Long Road Ahead

Markets tend to swoon in times of political crisis. It is therefore odd that they are rallying strongly in Brazil by assuming that any change in government would be better than the status quo. Much as one might be tempted to buy into this notion, markets are most likely wrong. When things can't seem to get worse, they often do anyway.

The stock market is up 16 percent since early January, with the sharpest increase (nearly 20 percent) occurring between February 26 and March 4, the day that former President Luiz Inacio Lula da Silva was forcibly detained for questioning by the Brazilian Federal Police. Reasons for such optimism are neither abundant nor well grounded. They stem from slightly improved prospects for commodity prices, as well as from a general perception that President Dilma Rousseff may not finish her term in office.

Why are markets behaving in such naïve fashion? One reason may be that Brazil has never faced a crisis as all-encompassing and severe. Although it has suffered through many episodes of acute balance of payments distress, fiscal crises, and inflationary spirals, it has never encountered a deep and protracted economic recession, coupled with a political crisis and corruption scandal that threaten to unravel much of the system that has prevailed since the country's redemocratization of the mid-1980s. Hence, there are no benchmarks by which to gauge current problems, making it extremely difficult to adequately identify the conditions under which a sustained economic improvement could be attained. It is no surprise, then, that many investors have come to assume that Rousseff's departure would automatically lead to a rebound in growth, even though a persistent slump is just as likely. Leaving aside the political and social upheaval that would probably ensue if Rousseff were to be impeached—the Worker's Party PT still holds considerable sway over significant parts of the country,—Brazil's economic problems are severe. A measure of this can be illustrated using Reinhart and Rogoff's severity index,1 defined as:

According to the latest Brazilian GDP numbers and projections from the International Monetary Fund (IMF), the peak-to-trough percentage change in real per capita GDP (in national currency) is estimated at 6.9 percent between 2013 (the peak) and 2017 (the assumed trough). This assumes GDP is stagnant in 2017, equivalent to a drop of 0.7 percent in GDP per capita. Following are three hypothetical scenarios for Brazil's return to its 2013 peak in GDP:

Notably, in each of these comparative episodes there was a banking crisis accompanied by balance of payments distress. Brazil's current turmoil has neither of these elements. (For more on this, see chapter 7 of PIIE Briefing 16-3: Reality Check for the Global Economy.)

Scenario 1 underscores the main argument that Brazil's crisis is here for the long haul, regardless of what government is in place. It is highly unlikely that the 2013 peak would take place again in 2018 following three years of contraction in per capita GDP. Moreover, no matter what happens over the next few months, there will be elections in 2018 under a very tumultuous political environment, jeopardizing any prospects for a swift resumption in growth. Scenario 2 assumes that whoever is elected in 2018 has enough leadership capacity and political capital to stage a full economic recovery halfway through their first term in office. Scenario 3, the realistic case, is based on the premise that the 2018 president-elect manages to start the reform process during their first mandate, and once reelected in 2022 with sufficient political clout, can finish the job by attaining a full recovery by the end of 2023. Hence, rallying markets are either looking way into the long term or not looking anywhere at all.

Another way to measure the gravity of Brazil's problems is to compare the evolution of GDP per capita on a purchasing power parity basis to that of its regional peers. As the figure below shows, among the largest economies in Latin America, Brazil is the only country projected to see a drop of 3.5 percent in PPP-adjusted per capita GDP by the end of this year. Even troubled Argentina is expected to fare better than Brazil, according to data from the IMF.

The endgame for Rousseff's troubled government may yet be near. However, the endgame for Brazil's economic woes is still nowhere within reach. 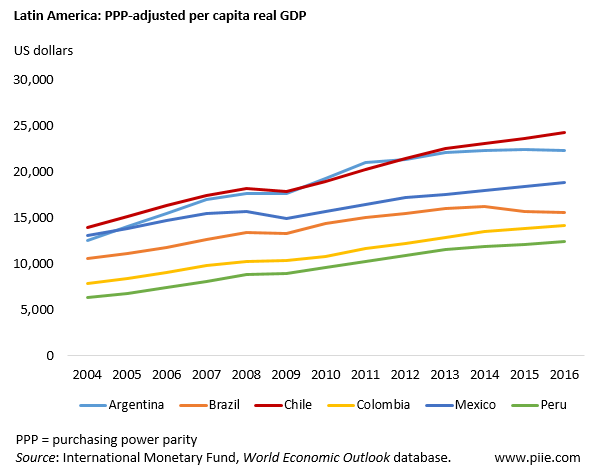