As the US unemployment rate continues to drift down to levels not seen in decades, many observers point to relatively low wage and price inflation as evidence that the Phillips curve is dead. Yet inflation is behaving exactly as the Phillips curve—which shows the inverse relationship between the inflation rate and the unemployment rate—would predict. The decline in the US unemployment rate is too recent and too small to have caused any significant rise in inflation to date. Inflation is likely to pick up over the course of this year and next, albeit with a considerable degree of uncertainty. This post updates and expands on my post of November 17, 2017.

The Natural Rate of Unemployment

The Effect of Downward Wage and Price Rigidity

The real puzzle is why the massive excess of unemployment between 2009 and 2016 did not push inflation down very far. The best answer seems to be that firms and workers are highly reluctant to accept cuts in prices and wages. This phenomenon is also at work in Europe and Japan, where comparable or larger periods of excess unemployment did not push inflation significantly below zero. 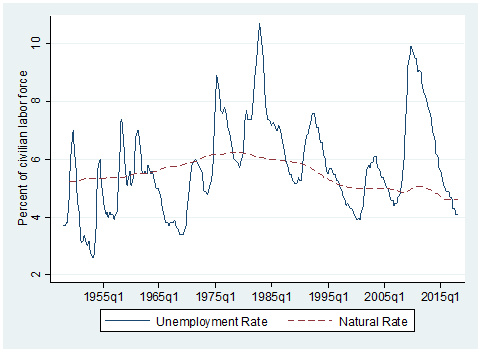 Downward wage and price rigidity matters only when overall inflation is very low. Figure 2 plots Phillips curves when the previous year's inflation rate was below 3 percent (on the left) and when it was above 3 percent (on the right). In each plot, the vertical axis displays the four-quarter core inflation rate minus its average value over the previous three years. The horizontal axis is the CBO natural rate minus the unemployment rate; thus, a high unemployment rate results in a negative employment gap. 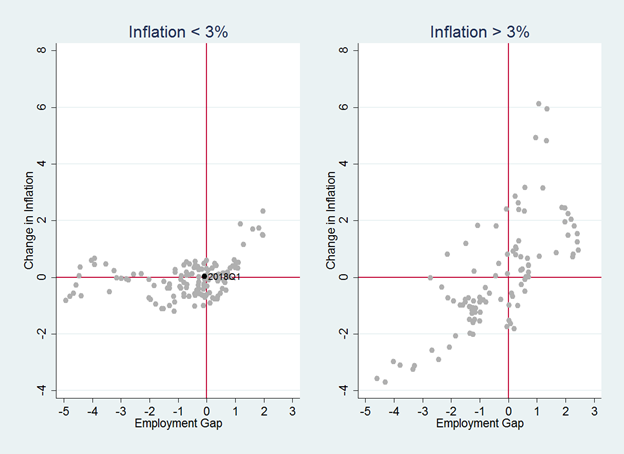 Note: Change in inflation is the four-quarter percent change in personal consumption expenditures (PCE) prices (excluding food and energy) minus the average percent change over the previous three years. The employment gap is the Congressional Budget Office estimate of the natural rate of unemployment minus the actual rate of unemployment as a percent of the labor force. The employment gap is lagged by four quarters. The split between left and right panels is based on four-quarter inflation as of four quarters earlier.
Sources: Haver Analytics and author's calculations.

1. Alternatively, some models are expressed in terms of deviations of inflation from where it had been expected to be. There are a host of issues in measuring such expectations.

The data underlying this analysis can be viewed here [zip].