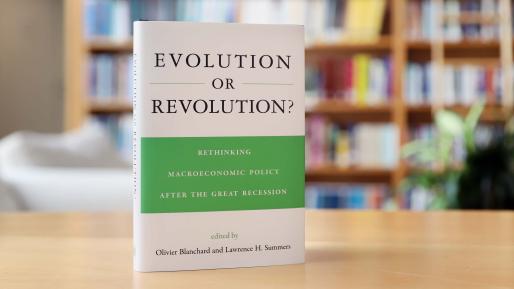 MIT Press has released Evolution or Revolution? Rethinking Macroeconomic Policy after the Great Recession, a volume containing the papers and discussions we organized at a Peterson Institute conference held 18 months ago. While matters are still far from clear, the events since then lead us to regard secular stagnation as a significant threat to advanced countries. From somewhat different perspectives (Blanchard 2019, and Rachel and Summers 2019), we have increasingly come to believe that a major rethinking of macroeconomic policy, and in particular of fiscal policy, is in order.

We had written in our overview paper that:

“At a minimum, monetary policy must reestablish its margin of maneuver. Fiscal policy must be reintroduced as a major stabilization tool. And financial policies must continue to be adjusted and reinforced. We can call this evolution. If, however, neutral rates remain extremely low, perhaps even negative, or if financial regulation falls short, more dramatic changes may be needed, from reliance on fiscal deficits, to active policy efforts to promote private spending, to higher inflation to achieve lower real rates, to much tighter constraints on the financial sector. We can call this revolution. Time will tell.”

Several striking changes in economic conditions have occurred since we wrote that passage.

Neutral real interest rates, as judged by markets or financial observers, have not increased and have likely declined, even as the Great Recession has receded. The notion that low rates were largely an after-effect of the financial crisis and would slowly rise has simply proven wrong. In the United States, 10-year real interest rates have declined significantly in recent months and are about where they were 18 months ago despite the passage of major tax cuts. In response to concerns about a possibly weakening economy and the absence of inflation pressure, the Federal Reserve chair has signaled that the current tightening cycle may be over with short rates below 2.5 percent. The markets regard the next central bank move as considerably more likely to be a rate cut than a rate increase. In Europe, in response to economic weakness, the authorities have pushed back the date at which interest rates will return to positive territory for several years and have now shifted to discussing restarting quantitative easing (QE). In both Germany and Japan indexed bonds suggest negative real rates as a feature of economic life for the next generation.

At the same time, fiscal policy has continued to be expansionary—in Japan, the United States (strongly), and Europe (mildly)—without leading to anything like overheating. Despite this fiscal stimulus, inflation has barely reached the Fed’s inflation target, and market expectations are for less than 2 percent inflation even for 30-year forecasts. In the euro area and Japan, inflation remains below target, with little indication that the target will be met any time soon. This weak inflation suggests that despite aggressive monetary and fiscal policies, either expected inflation is still below target, or output is still below potential, at least in these two economies.

Fiscal Policy Must Play a Bigger Role in Future Recessions

These two developments lead to the inevitable conclusion that fiscal policy will have to play a much bigger role in the future than it has in the past. There is simply not enough space, even in the United States, for monetary policy to respond adequately to a standard-size recession. Recall that the typical US recession has been associated with a 500 basis points decrease in policy rates, a decrease twice as large as the value of the policy rate today. But the problem may go beyond recessions and be more recurrent and more fundamental. Aggregate demand may remain chronically low, implying sustained low neutral rates. The zero lower bound may be binding for long periods of time, implying a need for sustained fiscal policy help, and a more dramatic redistribution of roles from monetary to fiscal policy.

To be clear: Higher public debt per se has welfare costs—although the low rates are a signal that these welfare costs may be limited (the focus of Blanchard 2019)—but in the current environment, to the extent that higher deficits can help reduce or eliminate the output gap, the benefits may well exceed these costs.

The long zero-lower-bound episode in Japan is highly instructive. Since 1999, the policy rate has remained at or very close to the zero lower bound, and the size of the Bank of Japan’s balance sheet has increased five-fold. On the fiscal side, Japan has run an average budget deficit of 6 percent of GDP, and net debt has increased by nearly 90 percent of GDP. Yet the zero policy rate, aggressive QE, and dramatically expansionary fiscal policy have not even succeeded in returning inflation to target and output to potential. For a long time, economists looking at Japan pointed to policy mistakes and excessive reliance on deficits; it is now clear that Japan’s very strong macroeconomic response was on net the right one.

One may argue that these extreme fiscal measures are needed only when a country is at the zero lower bound, and that the United States is now out of the danger zone requiring such policies. This would be wrong:

The empirical evidence for each of these arguments is not overwhelming, but together they provide a case for keeping neutral rates reasonably high, and by implication being willing to run the appropriate expansionary fiscal policy to sustain demand.

This in turn raises the question of how to coordinate fiscal and monetary policy. That they could work in opposite directions was made clear in the United States when the Fed bought long bonds to decrease their yield, and the Treasury used the opportunity to lengthen the maturity of government debt. Coordination between the central bank and the fiscal authority however raises delicate issues: One of the main advances in monetary policy has been to give the central bank independence, letting it set an inflation target to achieve on its own. Can this remain the case if both fiscal and monetary policymakers must work together to achieve full employment? The flat slope of the Phillips curve makes it very appealing to go for time-inconsistent policies, to risk overheating at the cost of apparently limited inflation in the short run; can this danger be avoided?

The Risk of Debt Explosion Can Be Lowered

Japan’s public debt situation triggers even more exotic questions. Its net government debt has now reached 150 percent, so far without an interest rate increase. But if investors were to worry and require a larger spread, then the higher the debt climbs, the higher the fiscal adjustment required to avoid a debt explosion. This raises the question of how to reduce that risk. One way is to increase the maturity of the debt, so that the increase in interest rates affects interest payments only over time, giving more time for the government to adjust. Another is to rely more on implicit, nontradable debt, for example giving a larger role to pay-as-you-go social security, which is clearly immune to sudden stops. Yet another is to ask the private sector to take on more of the debt. In general, because of its power to tax, the government is best placed to take on debt, but one must wonder whether this remains true at Japanese levels of public debt. One can think of measures, perhaps even distortionary measures, giving incentives to households to save less, and to firms to invest more. The distortions may be less costly than the risks of very high public debt.

Evolution or revolution? The choice of a label may depend as much on the temperament of the labeler as on an objective reading of economic conditions. We noted in our chapter in the volume that has just come out that both the Depression and the Great Inflation of the 1970s led to dramatic changes in macroeconomic thinking—much more dramatic than have yet occurred in response to the events of the last decade. We think it is increasingly likely that this gap will close in the next few years as a combination of low neutral rates, the reemergence of fiscal policy as a primary stabilization tool, difficulties in hitting inflation targets, and the financial ramifications of a low rate environment lead to important changes in our understanding of the macroeconomy and in policy judgements about how to achieve the best performance.

Deal or No Deal, a US Downgrade Is Deserved