The US economy lost 9 million jobs in 2020, the second worst year since 1940 for job loss on a percentage basis. Overall, the unemployment rate averaged 8.1 percent, the seventh worst year since 1948. That the coronavirus pandemic resulted in merely a bad recession instead of an unprecedented depression, as many feared in the spring, is in large part due to the massive fiscal and monetary policy response to the crisis.

As 2020 ended, continued progress on jobs reversed as the economy lost 140,000 jobs in December—even as the economy remains 11.5 million jobs short of its prepandemic trend. More concerning, some of the underlying aspects of the labor market remained bad:

If the deployment of vaccines and other steps get the virus under control, then the US economy has substantial excess savings, fiscal support, and pent-up demand, which could support a strong recovery in the second half of the year. The challenge will be the speed and ease with which these growing and ossifying labor market problems can be solved by workers finding new jobs.

The remainder of this blog explains these three points in more detail.

The realistic and full recall unemployment rates were elevated in December

The headline unemployment rate was 6.7 percent in December, unchanged from November. This concept works fine in normal times but has had some deficiencies in the context of the pandemic. In response to these unique circumstances we have been publishing a monthly update since June tracking what we call the “realistic unemployment rate” and the “full recall unemployment rate” as shown in figure 1. We explained the methodology for these two concepts in our earlier updates. 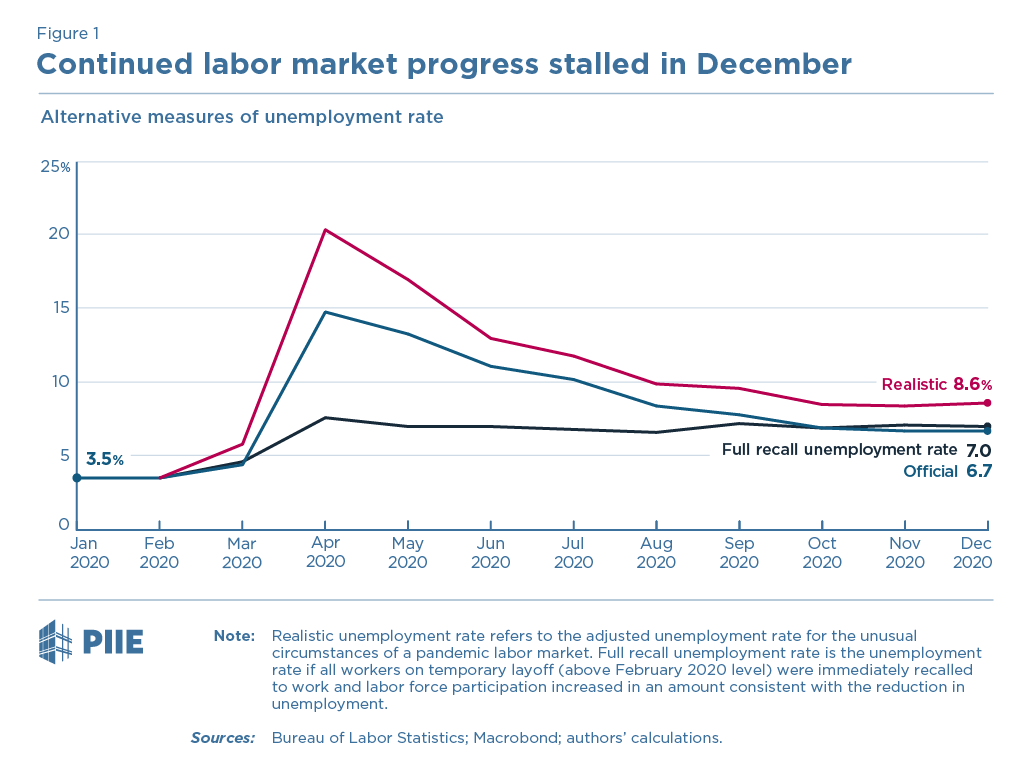 The realistic unemployment rate adds 953,000 workers who reported being “not at work for other reasons” as unemployed and also adds 2.3 million workers to the labor force to reflect the fact that the decline in labor force participation has been unusually large even conditional on the overall economic weakness (note, this is only a portion of the 3.9 million workers who left the labor force since February). This measure was 8.6 percent in December and is intended to be historically comparable to the official unemployment rate unlike other concepts that, by construction, are always higher than official unemployment rate (e.g., the U-6 measure of broad labor underutilization). The December value represents an increase from November and is now at its highest level since September.

The number of unemployed not on temporary layoff has risen by 2.7 million since February 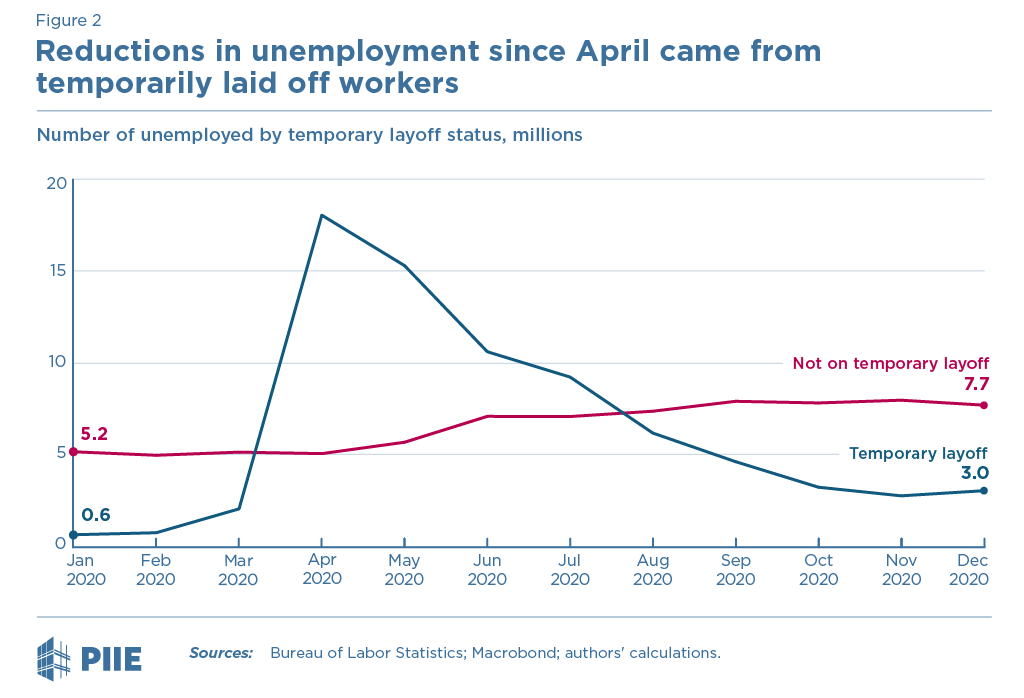 The increase in unemployed workers not on temporary layoff is concerning because it suggests that the low hanging fruit of labor market recovery has mostly already been picked, in the form of people returning to their old jobs, and that further recovery will require the harder step of people finding new jobs, in some cases in new industries.

The ranks of the long-term unemployed have grown by 2.8 million since February 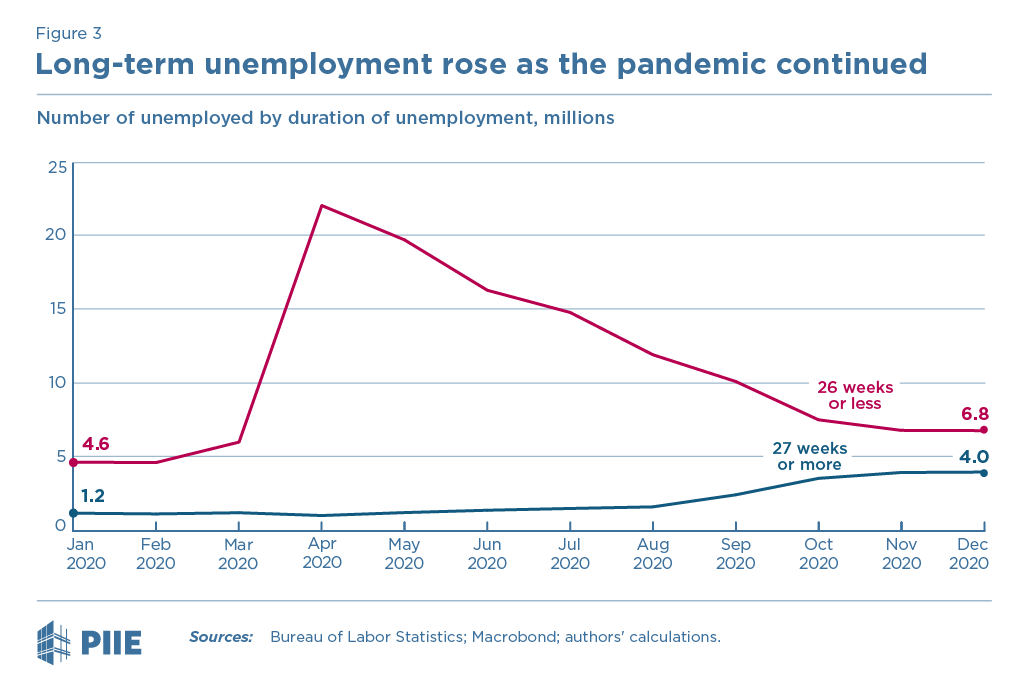 Economic evidence shows that long-term unemployment can have a scarring effect making it harder for a worker to find a job, more likely for them to drop out of the labor force for a sustained period, or likely to suffer from persistent reductions in wages.

Understanding the data can help inform projections of the trajectory of labor market recovery. We saw an initial “partial bounce back” in the labor market in the late spring and summer, as the unemployment rate fell quickly at first as businesses reopened, but the pace of recovery has slowed throughout the fall and has now reversed.

The future prospects of the labor market will depend on the trajectory of the virus, the future policy response, and how many people without jobs can quickly connect with their old jobs instead of undertaking the time-consuming process of finding a new job, or even a job in a new industry. In the short term, cases, hospitalizations, and deaths continue to rise. This not only has caused mounting human suffering but will take an increasing toll on the economy as well. The Coronavirus Response and Relief Supplemental Appropriations Act from December will provide substantial relief, but more action is needed, especially in deploying vaccines and testing, extending unemployment programs past March, and providing additional aid for states and localities.

If the virus is brought under control the economy should have sufficient aggregate demand to support rapid growth in 2021. This demand would be satisfied by putting millions of workers back to work and bringing millions more back into the labor force. The challenges of a speedy labor market adjustment grow the longer and worse the underlying unemployment situation gets.