Presidents have for decades touted a strong dollar as a sure sign of American economic strength. President Donald Trump has departed from that tradition. “As your President, one would think that I would be thrilled with our very strong dollar,” he has tweeted. “I am not!” Trump’s objective of a weak dollar, measured against the currencies of US trading partners, is to boost US exports and discourage US imports. He blames the Federal Reserve for not helping.

But how does the dollar’s current value compare with the past? Properly measured, the dollar is currently above its long-run average since 1973. But it has not strengthened much over the past four years. The trade deficit—which Trump deplores as a sign that US trading partners are not playing fair—diminished year-over-year real GDP growth in 2017 and 2018 by 0.3 percentage point. Karen Dynan’s estimate for 2019 is negative 0.2 percentage point, a small fraction of the difference between the administration’s assumptions a year ago about growth for 2019 (3.2 percent) and her current estimate (2.3 percent).

Trump said on August 21, 2019, that the United States has the “Strongest Dollar in History.” But measured properly, the dollar is well short of its historical highs. The trade-weighted index of the value of the dollar in nominal terms shows that the dollar did reach a record-high level in September. But the upward trend in nominal terms occurred because price levels in foreign economies have risen more on average than those in the United States. A more appropriate measure to assess trends in the foreign exchange value of the dollar over time and its implications for the US economy is a dollar index in real terms—adjusted for changes in relative price levels. The dollar index in real terms, commonly referred to as the real effective exchange rate (REER), has had no long-term trend and is well short of its historical highs.

Figure 1 illustrates this point using the Federal Reserve Board (FRB) staff’s merchandise trade–weighted index for the US dollar[1] against 26 other currencies.[2] According to the broad real index, the dollar is about 7 percent higher than its long-term average since 1973. Other indexes prepared at the Bank for International Settlements, International Monetary Fund, and Organization for Economic Cooperation and Development show the same basic pattern. 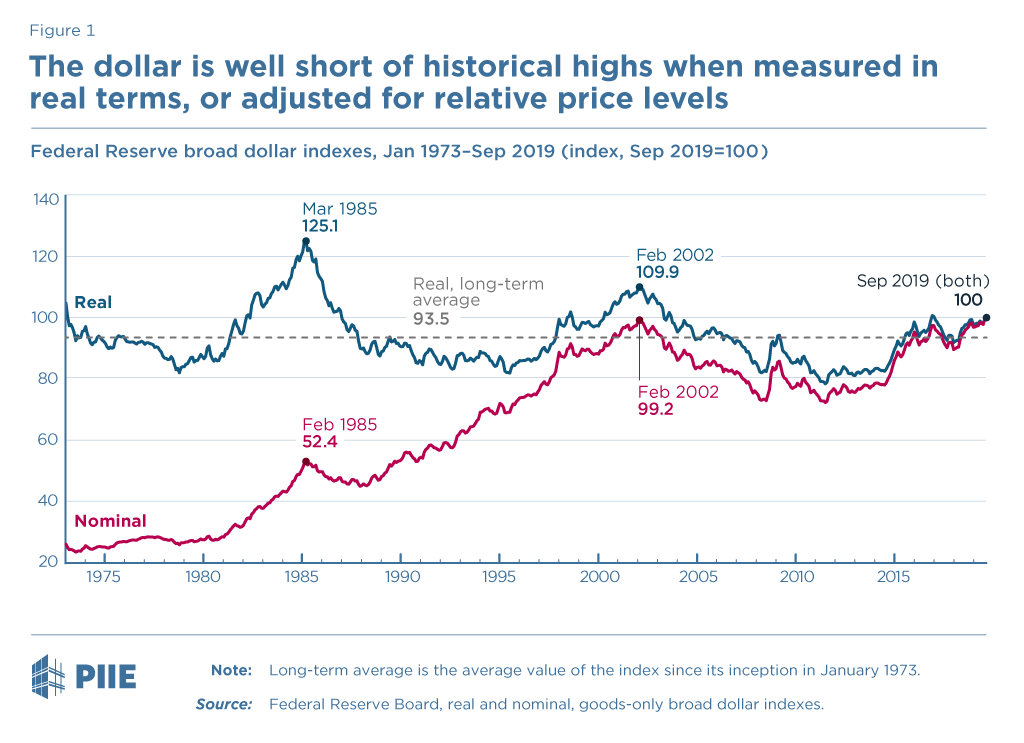 While somewhat elevated, the dollar’s current level in real terms is lower than previous peaks. The dollar was 10 percent stronger in February 2002 and 25 percent stronger in March 1985. The 1985 strength contributed to the multilateral Plaza Agreement to sell dollars and buy nondollar currencies, to drive the dollar down. The 2002 strength did not lead to significant foreign exchange intervention by the United States or any other major country.

The dollar in real terms has also not risen appreciably in recent years. Most of the rise to its current level was from low levels in mid-2014 to slightly elevated levels in mid-2015. Figure 2 illustrates that since July 2015, the broad REER dollar index has averaged about 3 percent above its long-term average since 1973. Over this period, the dollar has been within a 6-percentage-point range, temporarily breaking out of this range only about a quarter of the time.

Figure 2 also shows that the dollar has risen more against advanced economies (AE), as measured by the major dollar index, than against US trading partners more broadly.[3] On this basis, however, the dollar’s current level also is only 3 percent above the average from mid-2015. 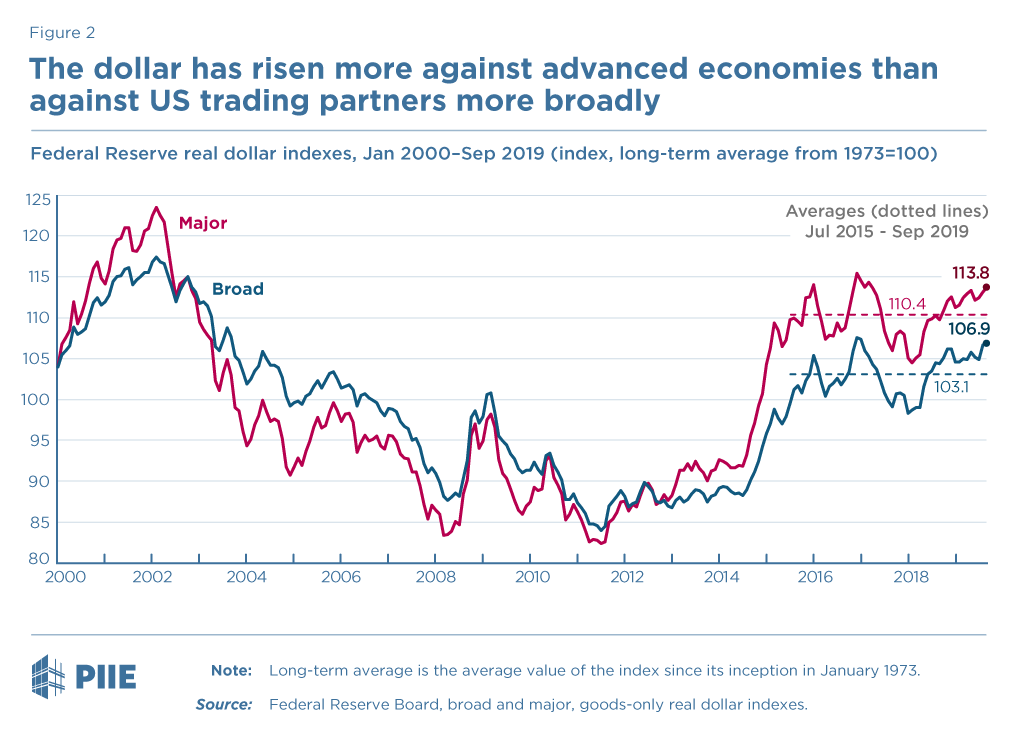 President Trump has suggested that relatively high interest rates in the United States explain the dollar’s strength in recent years. This claim is supported by the theory of uncovered interest parity (UIP), which states that the difference between interest rates on two similar financial instruments in different currencies will equal the change in exchange rates over the period. The dollar index should therefore rise when US interest rates rise relative to foreign interest rates.

Overall, while the dollar has risen nearly 9 percent since January 2018, a broader historical perspective reveals the dollar is not unusually strong. The Federal Reserve’s broad real dollar index has been higher 19 percent of the time, measured in monthly averages, since 1973.

1. This blog uses the Federal Reserve Board (FRB) staff’s goods-only dollar indexes, which will be discontinued in 2020. The FRB staff released revised dollar indexes in January 2019 that use goods and services trade as the basis for the weights to capture the increased importance of services in US trade. In this blog we prefer the goods-only index to allow for a better comparison to the goods-based dollar indexes compiled by other organizations and because the goods and services index is only available beginning in 2006.

2. For the years before the creation of the euro, the broad index is based on dollar exchange rates for 35 currencies, and index calculations for those years use separate currency weights for the ten precursor currencies that merged into the euro at the end of 1998.