On January 19, the Wall Street Journal published a letter that was a condensed version of my response to an article by Edward Lazear on January 8. My complete response follows.

Edward Lazear argues that China's massive government intervention in the currency markets—more than $3 trillion in the past 10 years—has caused no significant harm to the world economy. If true, this would be an astonishing endorsement of bureaucratic meddling in free markets. Of course, it is not true.

Lazear acknowledges that China manipulates its exchange rate, but he claims that exchange rates have essentially no effect on trade. He bases his claim on a chart of Chinese exports to the United States and Europe which, on close examination, does not support him. After allowing for the standard one to two year lag in the effect of the exchange rate on trade, Lazear's chart shows that the dollar appreciation of 1999–2000 boosted China's exports to the United States relative to Europe and the dollar depreciation of 2003–04 did the opposite.

The idea that exchange rates have no effect on trade does not pass the laugh test. It is a claim often made to me by Chinese officials, who sometimes go on to say in the same meeting that even a tiny rise in the value of China's currency would bankrupt most Chinese exporters. The two claims are blatantly contradictory. In reality, both are false. Exchange rates do have important effects on trade, but they are not the only factor. A stronger currency will cost most exporters some foreign sales, but it is a rare firm that loses all its foreign sales because of a moderate currency appreciation.

Currency manipulation is not limited to China, however. Indeed, over the past few years China has reduced its manipulation sharply. But other countries have stepped up their manipulation—Switzerland was the biggest manipulator in 2012—and the problem remains enormous. In a recent paper, C. Fred Bergsten and I identified about 20 countries that have manipulated their currencies to achieve current account surpluses over the past decade. (The current account is the broadest measure of a country's balance of trade.) The chart nearby shows that purchases of foreign currency by governments in these countries are closely related to their current account balances. This strong visual connection is backed up by statistical analysis that controls for other factors influencing trade balances.

The world is a closed system and one country's trade surplus is another country's trade deficit. We estimate that excessive purchases of foreign currency by governments in recent years have widened the US trade deficit by $200 billion to $500 billion per year, with millions of jobs lost. Prior to the Great Recession, the Federal Reserve was able to offset the job losses by keeping interest rates low and thus encouraging employment in other sectors such as housing. But the Fed is either unable or unwilling to offset the job losses fully now, and unemployment is expected to remain above normal for at least the next six years. A significant narrowing of the US trade deficit is about the only option left to return the US economy to full employment any sooner. Viewed in this light, the cost of foreign currency manipulation is clear. 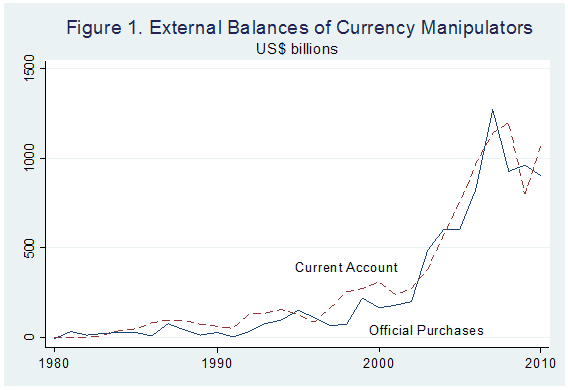 Is the Renminbi Still Undervalued? Not According to New PPP Estimates

The Rise and Rise of the Renminbi: An Update