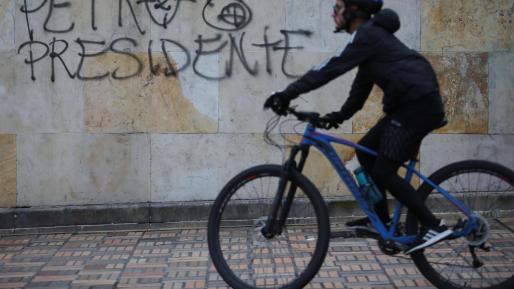 Graphic produced and designed by Nia Kitchin and Oliver Ward.

The goal of sustainable long-term economic growth has generally been a pipe dream for Latin America since the rebuilding of democracy in the 1980s. Chronically beset by inflation, uncontrolled public spending, wayward monetary policy, and external shocks, most recently from the COVID-19 pandemic, the region's governments have lurched back and forth from right to left during election cycles, with each new regime undoing what came before it, including sensible policies and reforms in many cases.

The interactive figure below illustrates how the political center, whether right or left, failed to deliver over many decades. Growing public dissatisfaction explains the hollowing out of the center and the tendency to vote for more extreme, "outsider-type" candidates. That trend is unlikely to change in the future.

Until recently, for example, Mexico and Colombia were dominated by center-right leaders whose economic mismanagement lost the confidence of their electorates. As a result, Mexican voters elected Andrés Manuel López Obrador, a leftwing populist, in 2018. In a recall referendum in April 2022, they backed him to finish his six-year presidential term. In June 2022 another leftist, Gustavo Petro, rode to victory in Colombia. He will assume office in August, becoming the country's first left-wing president. In fact, the current electoral cycle in Latin America has also delivered leftist Gabriel Boric in Chile, the country's youngest president and a former student leader notable as one of the key figures in the 2011 student uprisings. Brazil, currently led by far-right Jair Bolsonaro, will have its own electoral reckoning in October, when as the incumbent he will face his leftist nemesis, former president Luiz Inácio Lula da Silva, the likely winner according to latest opinion polls there.

The region has suffered from instability for decades

In the 1990s, Latin America was pummeled by serial shocks caused by the Mexican, Argentinean, Asian, Russian, and Brazilian financial crises while domestic fiscal and monetary conditions remained fragile. Before the 2008 financial crisis, the region briefly sustained annual growth rates of about 3.5 percent according to the International Monetary Fund (IMF), somewhat above global levels. Between 2010 and 2012, Latin America had a modest, short-lived boom, growing at an average clip of just over 4 percent. Political upheaval since then and the pandemic more recently have once again placed countries in the region among the slowest growing in the world. The outlook is far from good as the political pendulum swings ever more towards the extremes of the spectrum, threatening prospects for policy continuity.

Some of the recently elected leftist leaders may enact constructive policies, particularly in protecting the environment and human rights. They may also prove to be pragmatic on macroeconomic policy, partially resisting the inevitable pressures to spend on social welfare programs beyond what their governments are able to afford while trying to fight inflation. That they may accomplish such good things is not the point. Latin American societies remain deeply divided, as recent elections have shown: Voter turnout has been low, dissatisfaction remains extremely high, and politics in these countries are even more polarized than during the last electoral cycle (2015-2018).

This polarization, aggravated by poorly performing economies, does not bode well for policy continuity. Indeed, the likely scenario is that in four or five years, in the next electoral cycle, the pendulum will again swing from the left to the far-right as the center continues to be hollowed out. Following the trends observed in much of the world, including the United States, far-right movements have sprung up in Latin America and will remain a force to be reckoned with well into the future. The persistent discontinuities in policy are certain to jeopardize sustainable long-term growth.

The country has been in political upheaval since the election of President Dilma Rousseff, a Lula protégée, followed by her contentious impeachment in 2016. Rousseff, of the leftist Worker's Party, was succeeded by her center-right vice president, Michel Temer, who governed erratically until Bolsonaro's election in 2018. Brazilian growth under Temer and Bolsonaro averaged a dismal 1.4 percent between 2017 and 2019, according to official data. The economy shrunk nearly 4 percent in 2020 and rebounded in 2021 with a growth rate of 4.6 percent. But Brazil's growth rate for 2022 is projected at below 1 percent against the backdrop of internal political problems over Bolsonaro's right-wing policies, as well as high inflation and a hostile external environment.

As a net oil importer, Brazil has not benefited from the war in Ukraine. Because it needs to buy oil in international markets to meet internal demand, the rise in oil prices has increased inflation and slowed the economy by more than the resulting uptick in oil exports. It has also failed to reap revenues from exports of major crops, such as soy and wheat, because sales of these products are concentrated only in the first quarter of every year. Looking ahead, contentious elections and more political turmoil make growth prospects uncertain at best. Even if Bolsonaro is ousted, a far-right comeback in five years is more than likely, prolonging uncertainty and obstacles for policy continuity.

It is practically a cliché to state that the outlook for Latin America is grim. Unfortunately, increasingly dysfunctional politics in the region leave no room for thinking otherwise.