Italy's New Government: Bad News for Europe But No Cause for Panic in Markets

The prospect of a new populist government in Italy consisting of the Five Star Movement (MS5) and the anti-immigrant League parties has caused increased trading activity in financial markets, as investors seek to incorporate this new information into the price of Italian assets and especially government bonds. Although the beginnings of a selloff in Italian government bonds raises questions about Italy's debt sustainability and possible contagion in other euro area countries, current and past bond yield trends suggest panic is not in order.

Will the New Government Be Able to Govern?

The MS5 and League parties are both politically untested and could not even quickly agree on a credible candidate for prime minister. A coalition government of the two does not seem likely to be able to agree on the policy details necessary to pass new legislation. Considering that the MS5-League coalition holds only slim majorities of 6 and 30 seats in the Italian Lower House and Senate respectively, and Italian legislators are known for changing party affiliations frequently, this is an unstable—potentially short-lived—coalition that could lack the votes for the more radical parts of their platform. It is still too early to say which key cabinet members (especially finance minister) President Sergio Mattarella will accept, and which legislation—tax cuts, pension reform rollback, or universal basic income—the new government will be able to pass.

The same built-in decision inertia in the political system, which makes Italy nearly impossible to reform, looks certain to frustrate a MS5-League government’s overhaul of Italy, too. This uncertain outlook for the new government’s ability to legislate should be comforting for many investors in Italian assets and for the other EU and euro area members.

Yet at the same time, the financial markets' move to lower the price on many Italian assets seems appropriate, in light of the heavily procyclical and in the medium-term in all probability unsustainable fiscal policy the new coalition has proposed. 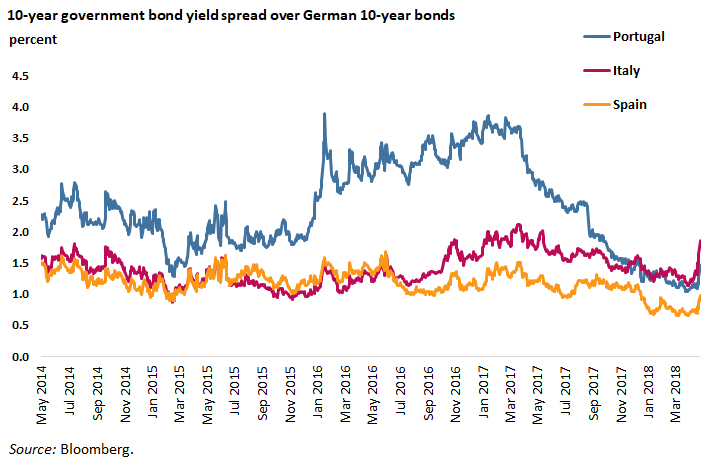 First, the selloff in Italian government bonds has to date been relatively muted—the spread with Germany has not yet reached the levels seen in early 2017, when many feared that Marine Le Pen might win the French presidency. Italian yields have risen rapidly in recent days, though, highlighting the potential for further rapid yield increases in the future if the new government were, for instance, able to pass militant versions of its spending proposals into law.

Second, while the rise in Italian spreads has affected both Spain and Portugal, the effect for both countries is limited and merely takes them back to where they were in early 2018. As such, it is not obvious that further deterioration in Italy would cause a sudden, dramatic economic crisis on the Iberian Peninsula. And if Italy does not pose a dangerous contagion risk to other euro area countries, then any intervention by the European Central Bank (ECB) to ease market pressure on Italy will be impossible to justify.

In any case, the fact that the new Italian government’s program opposes the euro area fiscal policy consensus and will violate existing EU and euro area fiscal rules means that the ECB's threshold for any intervention is extremely high. Indeed, European institutions and other euro area governments likely view the early widening in bond spreads that has already occurred as a welcomed early warning shot across the bow to Rome's new rulers.

Third, the case of Portugal suggests there is no reason to be alarmed yet about whether Italy can sustain its debt. With a new left-wing government that investors initially feared would be fiscally irresponsible, Portugal's bond spreads in 2016 and early 2017 were significantly and persistently above current Italian levels, and its debt in 2016 was at roughly 130 percent of GDP, essentially identical with Italy’s. This highlights that even a high-debt euro area member with a very low average growth rate in the euro era can sustain elevated bond spreads for quite some time and regain investor confidence through its policies (and some good luck). It will take a much longer period at higher bond yields to jeopardize Italy's debt sustainability. Also, Italy’s new government has the advantage of starting with surpluses in its primary budget and current account—the country is not about to be overwhelmed by an economic crisis. It will take a longer period of the new government implementing poor policies for that to happen. It seems highly likely therefore that the Italian political system would have time to correct course.

Ultimately, as it will prove politically impossible to extricate Italy—especially Northern Italy—from its close economic integration with the rest of the euro area, and domestic savers would oppose a new domestic currency, Italy will not exit the euro area, and material redenomination risk is not applicable. Unfortunately for Italy, there are plenty of other risks associated with the new government’s program for investors to worry about.

The increased uncertainty in Rome also worsens the prospects for real institutional reform in the euro area in the short-term and will likely dampen euro area growth in 2018. Italy’s new government is consequently bad news for all of Europe.

The UK and the EU Should Prevent Mutual Assured Damage