If Not Quantitative Easing, What Can the European Central Bank Do?

The bond-purchasing monetary strategy known as quantitative easing (QE) is poorly suited for the euro area. The widespread demand that the European Central Bank (ECB) pursue a practice that has worked in the United States has become an unnecessary political distraction for the ECB. What, on the other hand, should the ECB do if the current ultra-low euro area inflation levels persist or even fall further, driven in part by currency turmoil in emerging markets?

One reason for the ECB's resistance to QE can be found in comments from its president, Mario Draghi, at Davos in January. Five euro area program countries (Greece, Portugal, Ireland, Spain, and Cyprus) are largely responsible for the decline in inflation (harmonized index of consumer prices [HICP]) in the euro area. Throw in Italy and essentially all the recent HICP decline is accounted for.

Figure 1 illustrates the national contributions to euro area core HICP inflation since 1997 (using three-month rolling averages for heuristic reasons). On average, core HICP has been 1.5 percent a year since 1997, accounted for by 0.37 percentage point on average coming from Italy and the Program-5 countries each, 0.29 from Germany, 0.27 from France, and 0.23 from five other core countries (Benelux, Austria, and Finland).1 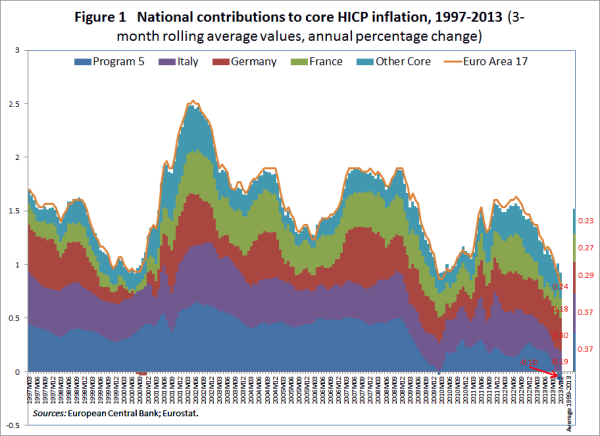 Why Should the ECB Not Act in This Situation?

Some economists suggest that Europe is in danger of falling into the deflationary trap of postbubble Japan in the 1990s and early 2000s. But reforms of the European banking system are proceeding at a faster pace than Japan's in that era, and structural reforms in the periphery have been more impressive than those being carried out in Japan under Prime Minister Shinzo Abe. The euro area demographic outlook is also better than Japan's, not least because of immigration.

But for the ECB's governing council in Frankfurt to be indifferent to the problems of the periphery could undermine these countries' recovery and longer-term debt sustainability. There is a case for the ECB to do more—but what?

As discussed earlier on RealTime, the diverse and bank-centered euro area financial system does not suffer from the immediate excessive risk aversion that traditional QE was designed to alleviate in the United States. Were the ECB to buy sovereign bonds, there would be no guarantee that bank lending rates for nonfinancial sectors would fall in the periphery. QE alone would not be sufficient to repair the area's monetary transmission mechanism. Deflationary risks are present among only some members, so a more geographically targeted instrument is needed. The ECB, moreover, does not need to force private investors out of risk-free assets. Rather it should ensure that nonfinancial sectors in the periphery have access to finance at rates similar to those elsewhere, ending the fragmentation of lending rates in the euro area.

Fortunately, the ECB has tools at its disposal that most central banks don't. It is about to become the principal supranational banking regulator for the euro area, which will bestow upon it a degree of political independence as a banking regulator equaling its highly independent status as euro area monetary policymaker. Once the single supervisory mechanism (SSM) is up and running, it will be able to withstand pressure from the governments of countries whose banks it regulates. In any future crisis, that equals substantial political power. Like Draghi, Daniele Nouy, new chair of the SSM, cannot be fired by a single government or parliament. The soon-to-be-established single resolution mechanism (SRM) for dealing with failing banks will act only upon the recommendation of the SSM, giving Frankfurt the power to put any bank in the euro area de facto out of business.

In addition, the ECB has wide latitude on what type of assets it can buy, including private assets, subject to the constraint of maintaining the integrity of its balance sheet. Only government bonds at primary auctions are ruled out. The ECB is also merely the top layer of the hybrid European System of Central Banks (ESCB), in which national central banks are constituent parts. In normal economic times, national central banks have little to do. But the enabling Article 14.4 in the Statutes of the ESCB reads permissively:

In principle, ELA is only for solvent banks with adequate collateral. In practice ELA has been extended to financial institutions without collateral, such as Laiki Bank, with the ECB governing council looking the other way. This arrangement makes economic and political sense, because the alternative is worse and the costs are borne by the national governments and do not entail fiscal transfers between euro area members.

Ideally, the ECB would conduct a geographically targeted intervention via its central balance sheet in Frankfurt. But if that path is too contentious, because of the implicit fiscal transfers it implies, national central banks could purchase existing or new domestic bank loans made to the nonfinancial sector. Such a step would strengthen the balance sheets of banking systems and assume some credit risk, helping domestic banks make more new loans to businesses.

If such new loans could also be sold to the central bank at a reasonable price, peripheral banks would extend more new credit at lower rates closer to the euro area average. All told, these actions could ease the credit crunch faced by businesses in peripheral countries, without entailing any fiscal transfer in the euro area.

One might question whether this arrangement would transfer credit risk from the private to public sector balance sheets in some countries, aggravating the weakness of both national governments and their banking systems. But the magnitudes of central bank assistance would probably not be enough to deepen national sovereign debts materially. Say, for example, that the Bank of Italy purchased 5 or 10 percent of GDP in Italian bank loans, a magnitude sufficient to boost the Italian banking system. Would that suddenly threaten the market access of the Italian sovereign, especially since such a step might be part of a necessary banking recapitalization process? These loans, moreover, would sit on the balance sheet of the national central bank, rather than a national "bad bank."

What if I am wrong and such purchases were to damage the Bank of Italy's market access and force the Italian government to seek a lifeline from the ECB through its outright monetary transaction (OMT) facility? As with Ireland and Greece, the ECB would likely buy Italian government debt only after ensuring fiscal resources from Europe and the International Monetary Fund (IMF) were sufficient to avert credit losses on the Bank of Italy's previous purchases of bank loans. The actual credit risk would thus fall on the European Stability Mechanism, not Italy. In effect, such actions would speed the ultimate mutualization of private credit risk in the euro area.

Admittedly, purchases of private bank assets by national central banks would not help the rebalancing of the euro area. They also would not require Germany and other core countries to boost domestic demand and accept higher inflation. But Germany is more likely to accept this course of action now than to pursue greater inflation throughout the euro area, even at the risk of future risk mutualization.

If the ECB itself refuses to act on the current deflationary situation in the periphery, a majority of the governing board can at least allow national peripheral central banks to do something about it.

1. To make the figure easier to read, the smallest euro member states with a very low weight in the aggregate euro area data (Malta, Latvia, Estonia, Slovenia, and Slovakia) have been excluded.