Faced with large and growing budget deficits, Brazil's central bank is burdened by a policy dilemma: If it raises interest rates to control runaway inflation, it will increase the public sector's interest bill, worsening its fiscal deficit. The monetary authority's interventions in currency markets to stem the devaluation of the real have aggravated Brazil's problems. These massive purchases of the Brazilian currency are costly, adding to higher interest payments. Without a credible fiscal adjustment plan that addresses structural issues, Brazil may return to high and persistent inflation. The rapidly deteriorating debt dynamics may tempt Brazil to pay off its debt by printing money and inflating the debt away amid mounting political difficulties. Brazil may have to choose between letting inflation erode the debt or temporarily instituting an alternative exchange rate regime, both of which will increase its economic vulnerability.

Inflation targeting with tight money policies is currently ineffective because deficits have grown so large that any attempt by the central bank to raise interest rates above the rise in inflationary expectations—the definition of inflation targeting—would deepen the fiscal deficit. Inflation targeting can only work properly when the Taylor Principle is met, that is when the variation in interest rates exceeds that of inflation expectations, thereby anchoring prices. Brazil's nominal deficit currently stands at 9.2 percent of GDP. Of this amount, 8.5 percent of GDP corresponds to interest payments on public debt, up from 4.75 percent only a year ago. If the central bank were to continue raising rates to fight off inflation, it would add to the country's fiscal pressures. Higher rates could lead to currency turmoil as investors sell off their currency holdings, resulting in devaluations that fuel inflation. As a result, large and uncontrolled deficits turn a traditional monetary policy instrument into a toxic weapon. Higher interest rates not only fail to control inflation and inflation expectations, they may become a political liability for the government. When economists speak of "fiscal dominance" in this context, they mean that policymakers must yield to the threat of higher deficits by keeping interest rates in check.

The Brazilian problem of fiscal dominance has been compounded by the central bank's practice of intervening in currency markets since 2013, widening the deficit. The monetary authority has been relying heavily on so-called foreign exchange swap operations designed to protect investors against harmful devaluations of the exchange rate, which in turn would stoke inflation. In a Brazilian-style currency swap, the central bank offers a contract to be settled at a future date whereby the investor agrees to pay the observed interest rate variation on interbank deposit certificates in order to lock in a parity for the real/dollar rate. Roughly speaking, if by the time of settlement the currency has devalued by more than what is stipulated in the contract, the central bank has to hand over the difference in domestic currency.

In practice, adjustments to balance sheet positions occur daily and are posted regularly on the central bank's website. One is thus able to observe how currency movements affect the monetary authority's assets and liabilities. Since the transaction is akin to foreign exchange intervention in futures markets but settled in domestic currency, immediate reductions in international reserves are avoided. The outright reserve loss is circumvented, but cumulative central bank losses on these operations have amounted to 2 percent of GDP. These losses are included in the total interest bill, increasing the nominal budget deficit and adding to the monetary authority's difficulties in increasing interest rates to fight off inflation. Brazilian CPI inflation is widely expected to hit double digits this year and to fall only modestly in 2016.

Have Brazil's currency swaps prevented sharp devaluations or fluctuations in the exchange rate? As shown in the figures below, the answer appears to be no: Swap operations have neither prevented a sharp devaluation of the currency, nor have they attenuated volatility. 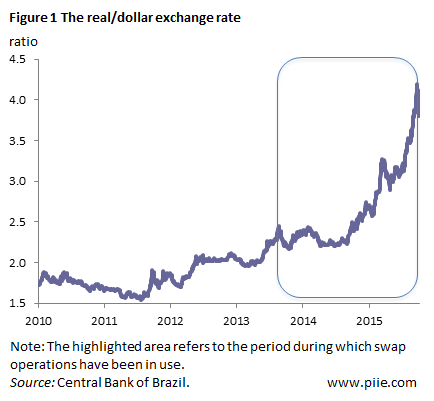 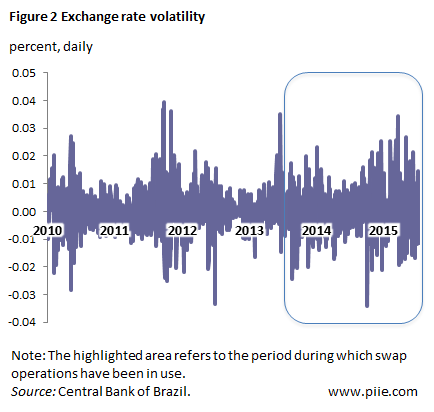 Following recent episodes of market distress, the central bank has continued providing currency hedge via swap operations, raising the stakes: Total swaps currently stand at about $110 billion. Rolling them over will put pressure on the interest bill and the nominal deficit.

In order to highlight the critical interaction between the central bank's foreign currency swaps, the resulting pressures on the interest bill, and Brazil's deteriorating fiscal conditions, a simple debt sustainability exercise was conducted. The baseline scenario uses the most recent projections for Brazil's primary deficit/surplus presented in the International Monetary Fund's Fiscal Monitor (October 2015). The alternative scenario assumes a worse case fiscal trajectory, where the government is unable to restore primary surpluses over the next four years, and thus the average cost of public sector debt remains high (figure 3). The growth trajectories under the two scenarios are broadly similar. 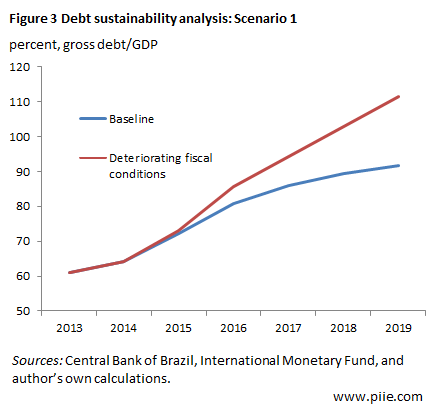 As Figure 3 shows, Brazil's debt-to-GDP ratio may reach 80 percent by the end of 2016 and continue to rise thereafter, unless the government is able to implement harsh adjustment measures. In the alternative scenario, where fiscal conditions continue to deteriorate, and the average cost of public debt remains high, the debt burden may rise above 110 percent within the next four years.

To Brazil's advantage, public sector debt is almost fully denominated in local currency—an important break with the experience of 2002 and 2003, when monetary policy ineffectiveness and fiscal dominance were last in conflict. However, the reliance on Brazilian currency for debt implies that without an appropriate nominal anchor, and in view of the government's fiscal failure, the temptation to inflate may be too great. I have therefore run a third scenario where inflation is allowed to reach 20 percent by 2017, staying at that level until 2019. Figure 4 thus illustrates the inflation in the absence of fiscal consolidation. If inflation reaches 20 percent by 2017 and remains at that level, the debt-to-GDP ratio could stabilize at 90 percent by 2018, when new elections might lead to a new government with greater policy will and political capital. 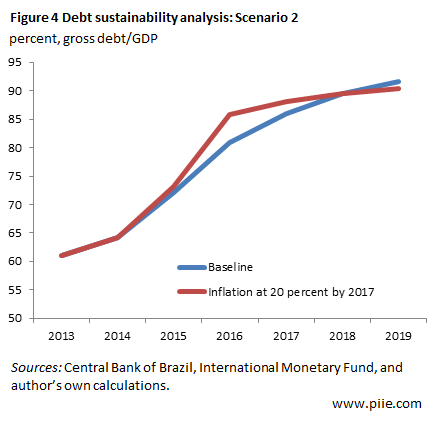 In the absence of fiscal adjustment, the policy choices facing the current government are stark. It can allow inflation to reach levels not seen since the early 2000s or resort to a temporary crawling band exchange rate regime to anchor prices and expectations before a credible fiscal plan can be put in place. A quasi-fixed exchange rate regime such as a crawling band works by temporarily borrowing monetary policy credibility from the country against which the domestic currency is loosely pegged, serving as a reference for prices and nominal values when the domestic monetary regime has lost credibility and effectiveness. In order for this strategy to work, the central bank needs to have a cushion of reserves. Brazil holds about $370 billion, or $260 billion if the full amount of the notional stock of outstanding currency swaps is deducted from international reserves, a conservative calculation. Although an intermediate exchange rate regime might work for Brazil, it exposes the country to speculation. On the other hand, if the regime is effective, it might remove the urgency for the government to institute a credible fiscal program, the only sustainable solution to Brazil's problems.

Brazil's experience with crawling bands and quasi-fixed exchange rate regimes has led to questions about the desirability of such an option. Critics argue that the country could be exposed to a balance of payments crisis, despite the large reserve stock. However, what they propose in lieu of a quasi-fixed regime may be a toxic pill for a country with unfortunate inflationary history. Letting inflation erode public debt would preclude the government from adopting a serious adjustment effort now and return Brazil to a recurrence of its painful inflationary past.