In response to the COVID-19 shock, European countries have introduced unprecedented programs of loan guarantees and other forms of credit support for their businesses. In March 2020 the European Commission relaxed its strict rules on state aid, allowing EU member states to channel needed funds through these unprecedented national coronavirus aid schemes. Concerns have since been raised that richer, less indebted member countries have the fiscal capacity to help their businesses more. Unequal support would distort competition in the EU single market, providing an unfair advantage to firms in better-endowed countries, for example, in the form of cheap funding. At the extreme, the crisis would wipe out all but the most-subsidized firms.

Preliminary findings of a research effort to understand implementation of these programs indicate that, contrary to widespread concerns, firms in richer or less indebted countries do not appear to disproportionally benefit from these schemes. This observation suggests that guarantee programs may not have the feared distortionary impact on the European single market, at least so far. When it comes to actual access by businesses to government-backed credit facilities, cross-border market distortions driven by differing fiscal capacities in EU countries appear to have been largely avoided. This is welcome reassurance in an otherwise challenging environment.

Loan guarantees, complemented in some countries with government purchases of corporate bonds, have been one of the main instruments with which European countries have provided liquidity to affected businesses during the COVID-19 lockdowns. In many countries, such programs represent more than half of the announced rescue funds.1 They form a complex picture since they are typically provided through a number of different national programs in each country, and in some countries these programs are managed on a highly decentralized basis. Our ongoing research seeks to understand this picture at a granular level in France, Germany, Italy, Spain, and the United Kingdom.

With a few exceptions, these programs have been reported as headline announcements. For example, early in the COVID-19 sequence of events on March 23, the German federal government announced two guarantee programs, backed by a €756 billion envelope,2 as part of its broader coronavirus package. One day later, the Spanish government made a similar announcement, with the headline number of €100 billion for guaranteed loans (see details in table 1). 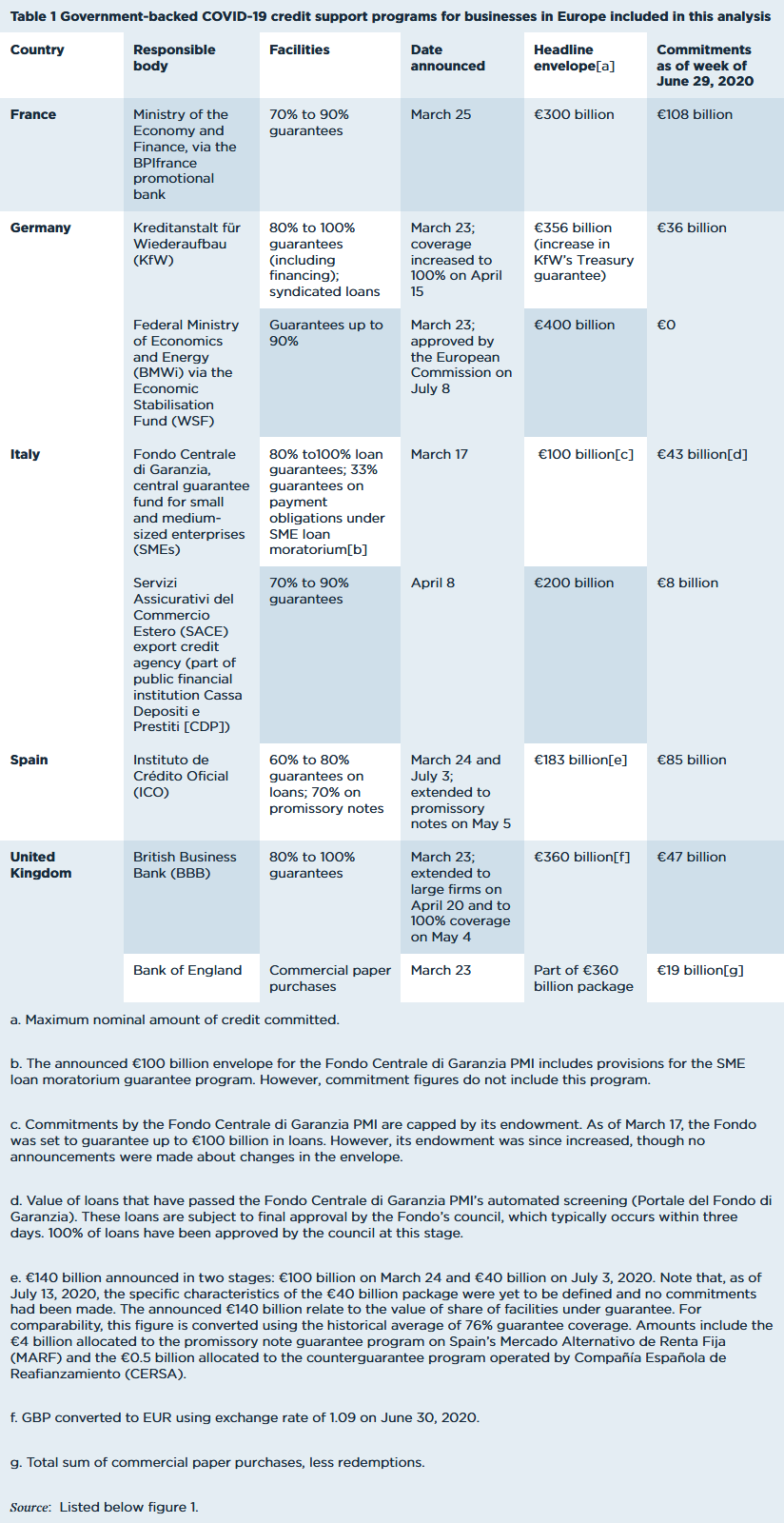 Our early findings suggest that such headline numbers are not necessarily correlated with actual commitments to individual companies. Nor are these aggregate individual commitments aligned with the amounts estimated by the European Commission in its state aid control capacity. For example, in mid-May the Commission announced that overall state aid provided by Germany would be a disproportionate 51 percent of the EU total (of which guarantees were a large share), prompting the Commission's executive vice president Margrethe Vestager to express concern about the potential cross-border competitive distortions. As noted earlier various observers have since March also expressed concern that more highly indebted member states would be fiscally constrained to extend business assistance, thus putting companies established in their territory at a competitive disadvantage.

In fact, as figure 1 illustrates, as of June 29, 2020, the distribution of funds appears reassuringly (from a single-market standpoint) uncorrelated with government debt burdens or perceptions of sovereign fiscal space. In particular, the amount of credit support Germany has committed so far appears to be comparatively small—amounting to 1 percent of its 2019 GDP as of June 29 (figure 2). This is the lowest share among the countries that were surveyed. The picture may be incomplete due to the lack of data on regional programs, but adding the missing data may not change the picture dramatically.3 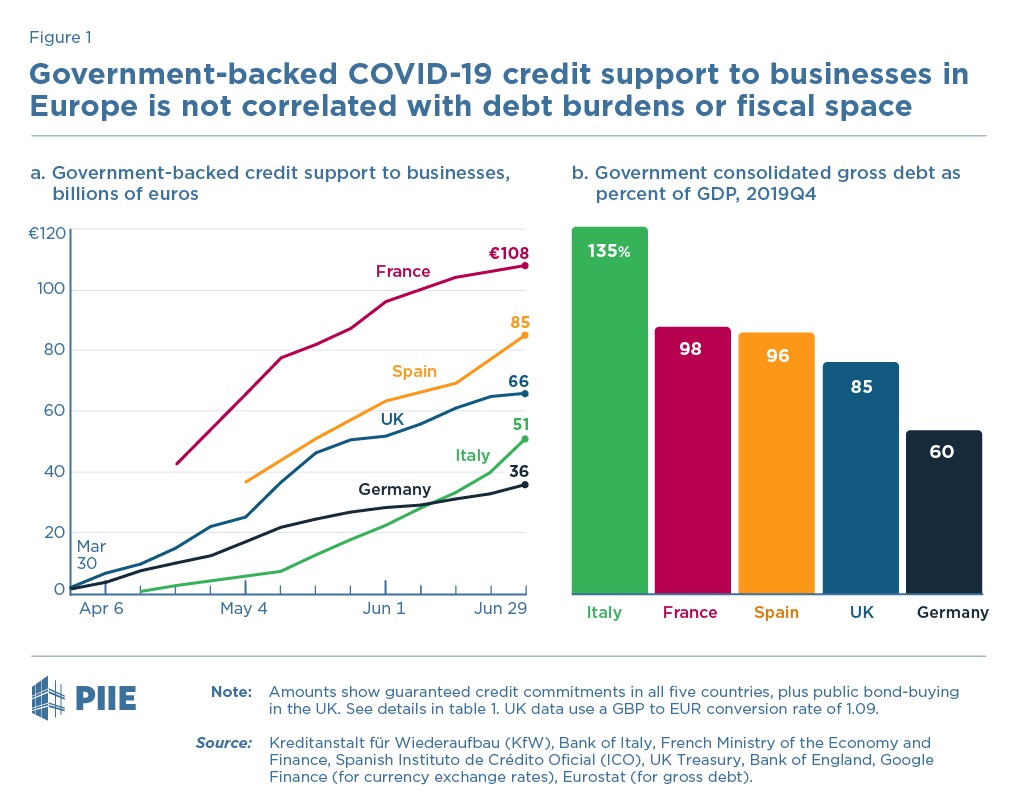 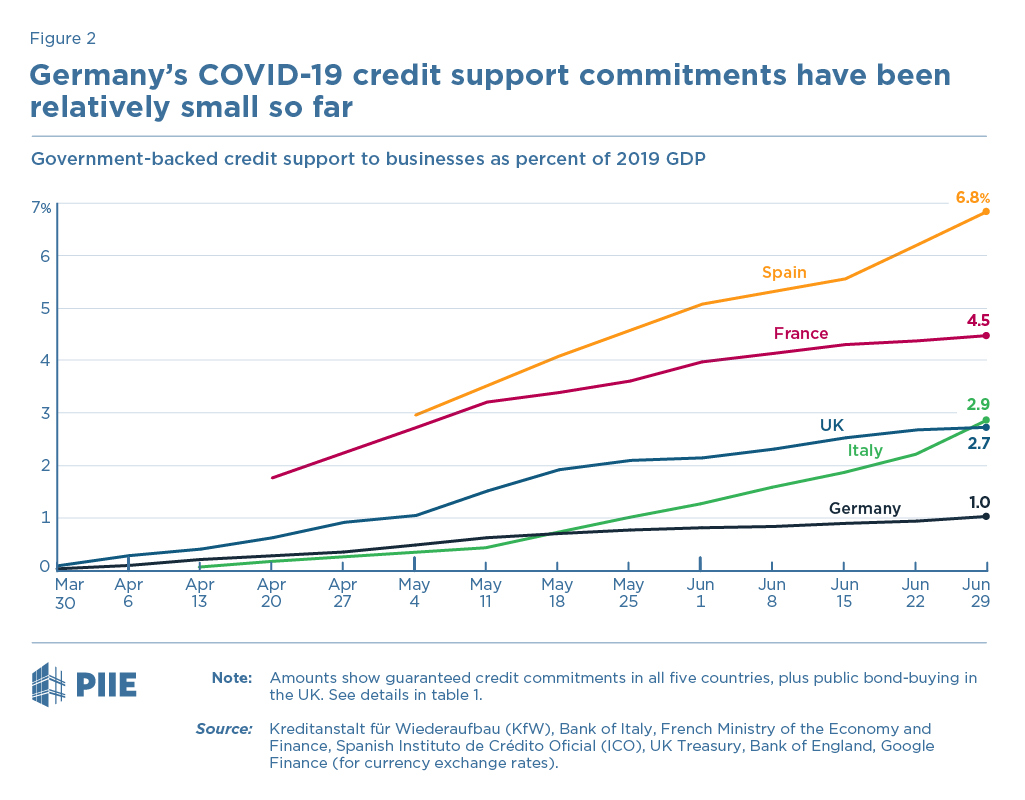 Figures 1 and 2 show the evolution of government-backed credit support under the various programs in the different countries. This support is mostly in the form of loan guarantees, except in the United Kingdom, where the corporate debt purchase program amounts to a third of all credit support to businesses. In Spain, guarantee programs cover both bank loans and promissory notes, though the latter is relatively small.4 Table 1 lists all the programs included in figures 1 and 2.

For credit guarantee programs, figures 1 and 2 report the full nominal amount of the credit covered by the public guarantee—i.e., 100 percent of the credit (e.g., loan) amount even if the guarantee covers, say, only 70 percent of it. The numbers presented in figures 1 and 2 exceed the amounts of guaranteed loans actually paid out, because businesses may obtain a bank's commitment for a guaranteed loan but then opt to not use it. In Germany, for instance, about a third of KfW-guaranteed loans that have been approved have not yet been used.

We have yet to fully analyze what drives the patterns in these findings. It is notoriously difficult to disentangle the respective roles of supply of and demand for bank credit in driving lending volumes, especially in times of turmoil like at present. On the supply side, issues of administrative capacity and program conditionality probably play a part and can be identified only through highly granular analysis. On the demand side, the availability of liquidity buffers and other sources of public support—such as grants and wage replacement schemes—are likely important drivers. With all that in mind, it seems clear that national fiscal capacity has not played the main role so far.

There is also no positive relation between the headline envelope of programs as initially announced and their later take-up (figure 3). (That is not to say that the size of the envelope does not matter: Large headline envelopes may have been set to reassure markets.) 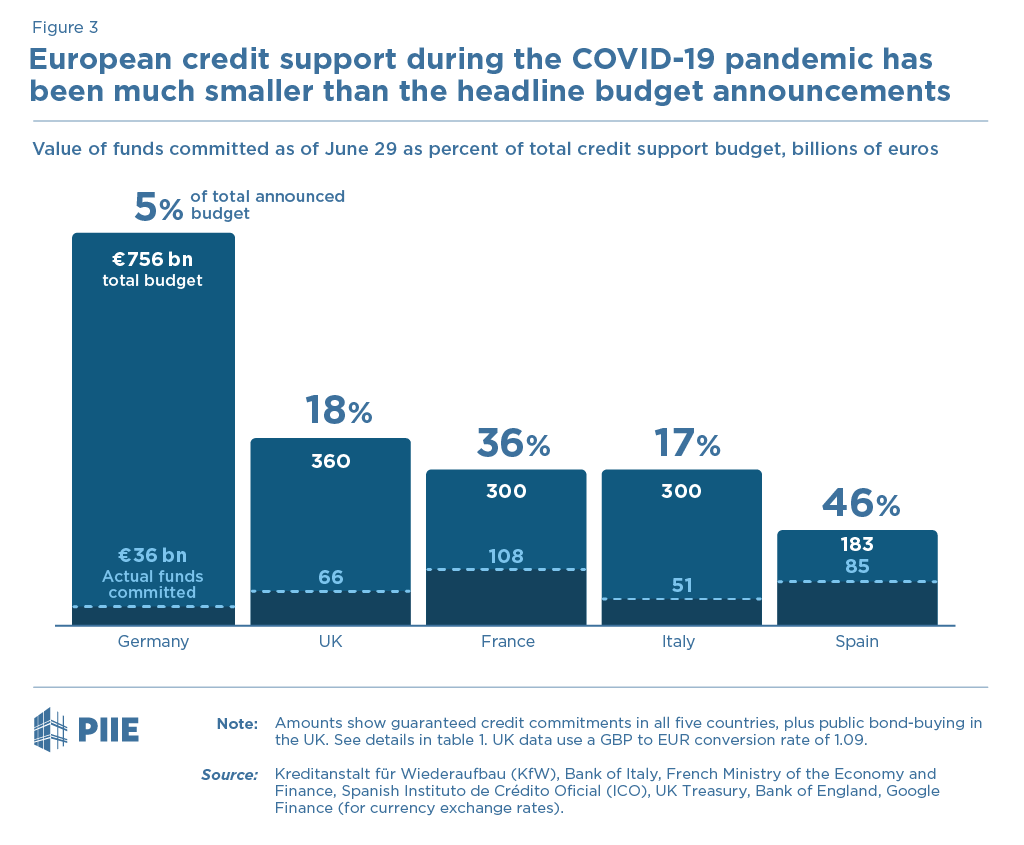 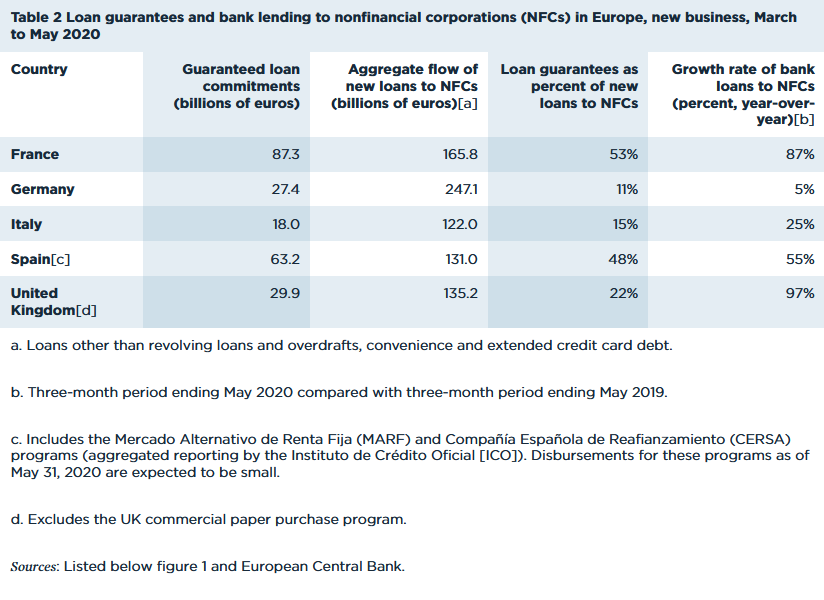 In the next steps of our analysis, we will continue to assemble and interpret granular information about these programs, i.e., examining size, design, bank incentives, sectors/types of firms benefiting from the guarantees and compatibility with EU frameworks. We also plan to record how these programs may be modified over time to adapt them to the exit from lockdown and the possibility of more corporate insolvencies, with consequences, for example, in terms of corporate governance, fiscal cost, and banking sector implications. We aim to better understand these and other dynamics in forthcoming publications.

1. Such is the case in France, Germany, Italy, Spain, and the United Kingdom.

2. The envelope includes two elements: (1) a €356 billion increase to the guarantee fund of the public financial institution Kreditanstalt für Wiederaufbau (KfW) and (2) €400 billion for guarantees to large firms through the Economic Stabilisation Fund (WSF, for Wirtschaftsstabilisieroungsfonds), which was approved by the European Commission on July 8. We do not include the €100 billion allocated to support KfW in case it fails to raise funds on capital markets, which has not been activated.

3. We were not able to collect figures for all German regions (Länder). Based on observations in some Länder, we estimate that, taken together, German regional credit support via regional development banks (Landesförderinstitute) amounts to a maximum of €10 billion. Other regional guarantee programs, e.g., via regional guarantee banks (Bürgschaftsbanken), combine to an additional €2 billion (as of June 20, 2020). Regional programs also exist in other countries, e.g., in Italy, but we estimate them to be comparatively small.

4. The Spanish guarantee program on promissory notes has an allocated envelope of €4 billion. For simplicity, the smaller €0.5billion counterguarantee program (provided to mutual guarantee societies by the Compañía Española de Reafianzamiento S.A., or CERSA) is not discussed here.

Financial Reform after the Crisis: An Early Assessment