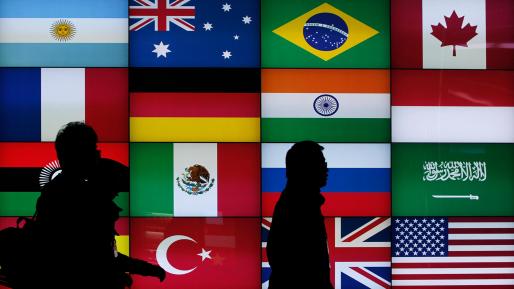 As nations across the globe scramble to combat the coronavirus pandemic, they have overlooked a major tool that would help greatly: international coordination of their economic policy responses to the crisis. Concerted action within the Group of Seven (G-7) leading industrial democracies has been minuscule, and the larger Group of Twenty (G-20), which played a crucial role in rescuing the global economy in 2008–09, has been an afterthought.[1] This neglect finally may be changing.

On March 16, the G-7 leaders pledged in nonspecific terms to coordinate public health and economic measures while encouraging science, research, and technology cooperation. But faced with the European Union’s self-defeating emergency restrictions on exports of hospital supplies outside the trade bloc, G-7 leaders had a limp response: “We will address disturbances to international supply chains and continue to facilitate international trade.”

Earlier on March 6, G-20  finance ministers and central bank governors issued an anodyne statement expressing sadness at the spread of COVID-19, stating that they are closely monitoring the situation and committing to work with international organizations to aid developing countries. The group then went AWOL until March 23, when International Monetary Fund (IMF) managing director Kristalina Georgieva and World Bank president David Malpass rightly released their statements to the G-20 finance ministers’ conference to prod the G-20 countries urgently to take concrete, collective measures. Reports of the call highlighted a virtual summit, responding to an initiative by India, to approve an “action plan” in response to the pandemic.

Many of the emerging-market and developing countries are experiencing large outflows of foreign financial investment. The IMF and World Bank are stronger financially than they were in 2008, with more flexible lending policies. But available IMF resources are likely to prove insufficient for the challenge at hand.

Accordingly, the G-20 should call upon members of the IMF promptly to fulfill their commitments to renew and enlarge their arrangements to lend to the Fund.

Over the past several years, the United States, China, the European Union, and many other countries have raised import tariffs. In response to COVID-19, the European Union and dozens of other countries have imposed restrictions on the export of products critical to providing medical assistance to patients suffering from the virus. G-20 members should pledge, first, to refrain from raising new barriers to investment or trade in goods and services, such as imposing new export restrictions or implementing measures to stimulate exports that are inconsistent with World Trade Organization (WTO) rules. Second, they should commit to rolling back import and export restrictions imposed since December 31, 2017, just before the US administration imposed safeguard duties on solar panels and washing machines from China.

Support for the Macroeconomy

The major central banks recently have acted aggressively to cushion the economic and financial impacts of the pandemic. But monetary policies must be reinforced by concerted fiscal policy actions on a broad scale. G-20 countries that have the scope to act should not free ride.

The coronavirus pandemic, unlike the global financial crisis of 2007–09, did not originate in the North Atlantic financial system. Banks are also stronger than they were then.

The G-20 should call on the Financial Stability Board, established in 2009 to coordinate supervision of the global financial system, to issue guidance on the appropriate capital relief for banks as they support their clients in this crisis. The G-20 should further call on the international institutions and national bank supervisors to organize a new Vienna Initiative, also created in 2009, to foster cooperation between public and private sectors to support continued foreign bank lending to countries in Eastern Europe and to establish similar mechanisms for other regions.

In short, leaders of major countries, acting through the G-20 and in the interests of their own countries, should lead in containing and repairing the economic and financial damage from the pandemic that threatens global prosperity.

1. The members of the G-7 are Canada, France, Germany, Japan, Italy, the United Kingdom, and the United States. The G-20 consists of the G-7 as well as Argentina, Australia, Brazil, China, the European Union, India, Indonesia, Korea, Mexico, Russia, Saudi Arabia, South Africa, and Turkey.