A fervent debate continues to rage over the hypothesis that the United States and other countries are in the grip of "secular stagnation," and cannot expect that robust economic growth will return anytime soon. At the latest American Economic Association meetings in January, the discussion focused on policies to prevent stagnation or at least to alleviate it. A commonly cited prescription is to boost public spending in an effort to help economic growth recover. But what are the policy implications of a prolonged and unavoidable growth slowdown? If economic growth is really going to be permanently lower than anticipated, it is time to recognize that we are poorer than we had realized. Future public expenditures will need to be reduced commensurately or our tax bill will need to rise. Many societies have paid a steep price in the past for failing to heed this unpleasant simple message.

To be fair, there is an important distinction between secular stagnation in its strict sense and more general declines in the rate of economic growth. Indeed, the policy responses should depend on the sources of the decline. For example, secular stagnation properly defined refers to a situation in which nominal interest rates would have to become negative (which cannot be sustained) for aggregate demand to be restored to the level necessary for full employment. In that situation, fiscal stimulus—if investors are willing to finance government borrowing on a sufficient scale—would boost aggregate demand and possibly prevent secular stagnation.

In practice, however, we do not know the extent to which the current slowdown in the advanced economies reflects lack of demand or such other factors as labor-saving technology, demographics, or bureaucratic obstacles to entrepreneurship and job creation. And as years go by, these distinctions become blurred. Lackluster investment initially caused by weak demand eventually results in slower technological progress, curtailing potential growth. Ultimately, from an operational standpoint, what matters is whether economic growth in the next decade or two is going to be lower than policymakers assumed. Economists who are brave enough to make projections for the next 10 or 20 years have by now revised such projections downward, especially for countries that have suffered greater declines in output.

Whatever the sources of growth slowing down, public spending should focus on infrastructure and education, reforming health care and pensions, and the elimination of less valuable programs or subsidies. Proponents of the secular stagnation hypothesis are right when they emphasize infrastructure investment, especially for maintenance. But most advanced economies also need to rein in total expenditures to recognize that we are all poorer than we had previously believed.

Ignoring a permanent slowdown in the rate of economic growth can lead to policy mistakes. For example, a country projecting a stable government debt ratio of 100 percent of GDP over the next decade or two would experience an increase in that ratio to 140 percent in 10 years if growth turns out to be 1 percentage point lower than assumed. As deficits rise, the ratio would balloon to more than 200 percent after 20 years.

Policymakers often mistake a long-lasting growth slowdown for a temporary slowdown and fail to adapt fiscal policies accordingly. A recent study on a large panel of countries over the past century documents that policymakers systematically fail to increase the primary fiscal surplus sufficiently when the long-run economic growth rate declines.1

Economic history provides several examples of debt crises or near-crises caused by unexpected, long-lasting slowdowns in economic growth that were not recognized in time. These include the Latin American and other middle income debt crises of the 1980s, the highly indebted poor country crises of the 1990s, and the rise in public debt in the advanced economies in the 1980s and 1990s. Japan is a striking illustration: After many years of stellar economic performance, its rate of economic growth declined after the first oil shock in the early 1970s and fell further with the bursting of the asset bubble at the beginning of the 1990s; policymakers failed to respond, and the debt-to-GDP ratio ballooned as a result (figure 1).

Negative or weak economic growth associated with the Great Recession has led to the sharpest and most pervasive worsening in the state of the public finances of the advanced economies since World War II. General government debt rose to 114 percent of GDP on average in the advanced economy members of the G-20 at the end of 2014, from 78 percent in 2007. Halting the rise in debt ratios and gradually reducing them will be more challenging if economic growth turns out to be significantly lower than before the crisis.

Given the diversity of fiscal positions and differences in recent growth rebounds—significant in the United States, elusive in Japan and most of Europe—one can expect differing policy responses. Policymakers must balance the risk of ending stimulus too soon against ending it too late. We do not know which countries will experience secular stagnation or prolonged slowdowns. But advanced economies as a group face lower prospects than they anticipated prior to the crisis. Curbing government expenditure growth to affordable levels in view of more modest output growth will be one of the defining policy challenges of the next decade. 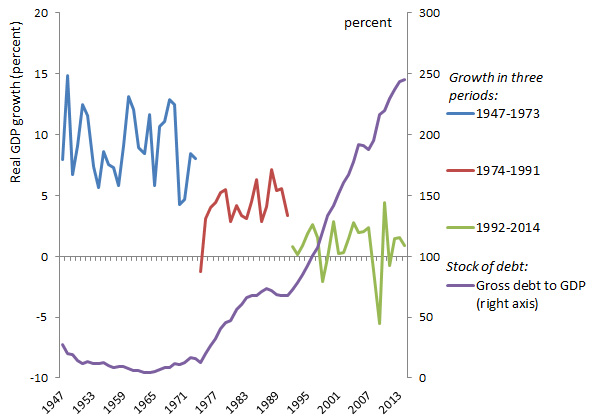 Does the new fiscal consensus in advanced economies travel to emerging markets?

Public Debt: Fiscal and Welfare Costs in a Time of Low Interest Rates