Deconstructing Branko Milanovic's “Elephant Chart”: Does It Show What Everyone Thinks?

The problems of slow income growth afflicting low and middle class workers in rich countries are widely attributed to globalization. Within economic policy circles, a figure known as the “Elephant Chart,” produced by the former World Bank economist Branko Milanovic, seems to offer dramatic proof of that proposition. The chart shows graphically how the incomes of the world’s poor and the world’s richest people have grown sharply over time, but it also identifies a group caught in the middle where incomes stagnated. This group was mistakenly identified as the low and middle classes of mature economies like the United States. Because global trade and investment also increased in this time frame, globalization became the culprit, harming a large swath of advanced nation workers.

But while the elephant diagram contributes to our understanding of global inequality, the common interpretation that rich countries lost ground because of globalization is misguided. The evidence suggests that to begin with, most people in wealthy countries did well over the period analyzed. In addition, several fundamental changes other than international economic integration were bigger factors in income growth over time.

I thought that we had moved beyond this mistaken interpretation, but Paul Krugman’s recent keynote address at the Peterson Institute for International Economics—entitled “After the Elephant Diagram”—proved that it remains seductive even among economic experts. Despite acknowledging that the chart does not prove causation—Krugman went on to employ the chart to argue that globalization allowed poor countries to grow to the detriment of workers in rich countries. This line of reasoning is flawed.

Figure 1 takes the world’s population, lines it up in percentiles from poorest to richest, and then examines the income growth each percentile achieved from 1988 to 2008. The elephant's hump-shaped back shows the rise of China where millions have seen huge improvements in living standards. The strong income growth for a large share of the world's population in poor countries is the personal side of “convergence,” the term used to describe the process in which low income countries catch up to rich countries. Over 500 million people were brought out of poverty (living on less than $1.25 per day) because of this change. Even as we fret over rising inequality in the United States, global inequality declined sharply—a truly mammoth achievement. 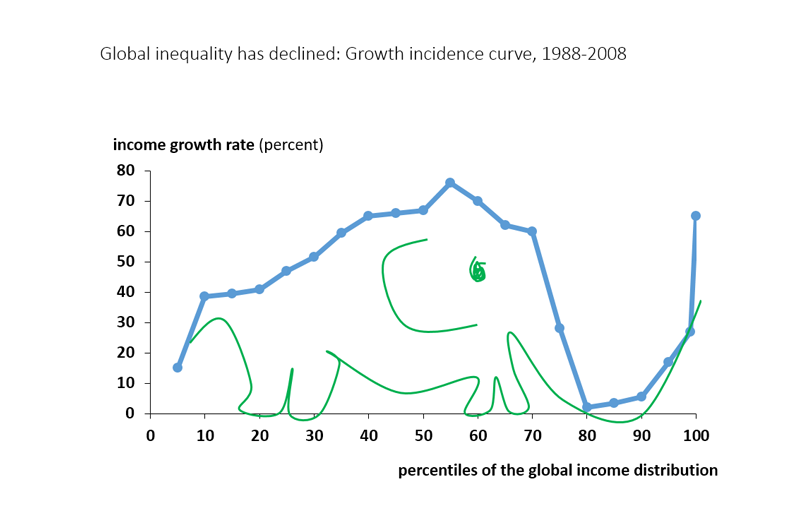 The dip around base of the trunk is perceived as showing that incomes of the lower and middle classes in industrial countries have stagnated.

Taken together, many have interpreted the figure as showing globalization helps poor countries to grow at the expense of the lower and middle classes of rich countries, as Krugman did in his lecture.

A problem with this interpretation is that there are numerous alternative explanations for the shape. A lot of things happened between 1988 and 2008: For example, the fall of the Soviet Union and the economic stagnation of Japan, driven by its rapidly aging population, caused income in those countries to decline or stagnate, irrespective of globalization. While integration was partly responsible for China’s rise, the shift from a state-run economy to private sector growth mattered enormously. An increase in automated production changed the landscape for manufacturing around the world, with fewer workers needed. Worldwide demand also shifted towards new goods, such as computers and software and improved products like flat screen TVs—companies that failed to see these trends were shuttered, replaced by firms producing the new goods. There were also dramatic policy shifts in some advanced countries, particularly the tax cuts and deregulation carried out by President Ronald Reagan in the United States and British Prime Minister Margaret Thatcher.

It is also hard to imagine that international trade could be the primary cause for such a large drop because trade is not a zero-sum game. Countries import goods that are relatively more expensive to produce, so greater imports raise living standards because prices fall. Countries export goods that they are more efficient at producing, so greater exports enhance productivity, which further raises incomes. While it is true that people employed in import competing sectors lose from globalization, economic research suggests that the vast majority of the work force in gains from increased trade.

A simple way to understand which groups are responsible for the shape in the chart is to examine how the image changes when holding populations constant and removing various countries. The Resolution Foundation (RF) issued a report that performed precisely this exercise.

The most striking finding of the RF report is that it is not the low- and middle-income population in all rich and middle-income countries or even the United States that pull the line down to near zero around the 80th percentile. Rather, it is Japan and the poorly performing ex-Soviet and Eastern European countries. Figure 2 shows the income gains over the same period for three groups—mature economies, rest of world excluding China, and Japan and Soviet satellite states. The incomes of most people in the latter group declined or stagnated over the period. Japan stumbled largely from demographic change, while the satellite countries experienced political and economic disruption.

Figure 2 Mature economies have performed well throughout the distribution 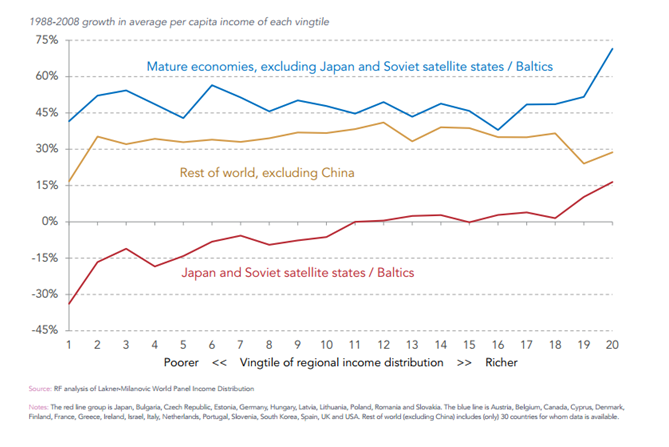 What happens to the graph if Japan and the Soviet satellite states are removed? Figure 3 repeats the elephant diagram without them and the drop to zero around the 80th percentile disappears. The figure also repeats the exercise excluding China—to determine whether the elephant’s back is driven entirely by the stellar performance of one country or reflects broader gains to emerging market populations. Now, the elephant vanishes. Most of the world’s population has seen income gains of around 40 percent, with the exceptions of the top and bottom of the distribution. 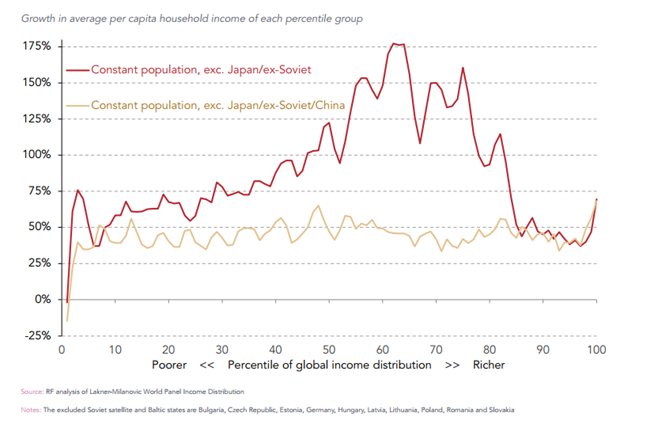 In sum, there is scant evidence that incomes stagnated across the lower and middle classes in all advanced countries, while the populations of the poor countries have soared.

This point is illustrated finally by an examination of income growth and inequality in advanced countries. Figure 4 shows changes in per capita GDP and the Gini coefficient across OECD countries, from the mid-1990s to the mid-2000s, the period when trade surged. (The Gini coefficient measures how unequally income is distributed, a rise indicates a move to less equality, with 0 being perfect equality and 1 being perfect inequality.) There is significant variation. Real income gains varied between 10 percent in Japan and 90 percent in Ireland. While inequality rose in the United States and nine other countries—inequality declined in Spain and seven other countries, and in eight countries, there was little change in inequality (less than one percentage point). Overall, there is wide variability in both income growth and inequality despite similar experiences with globalization and technology, suggesting other factors are largely responsible for the changes. 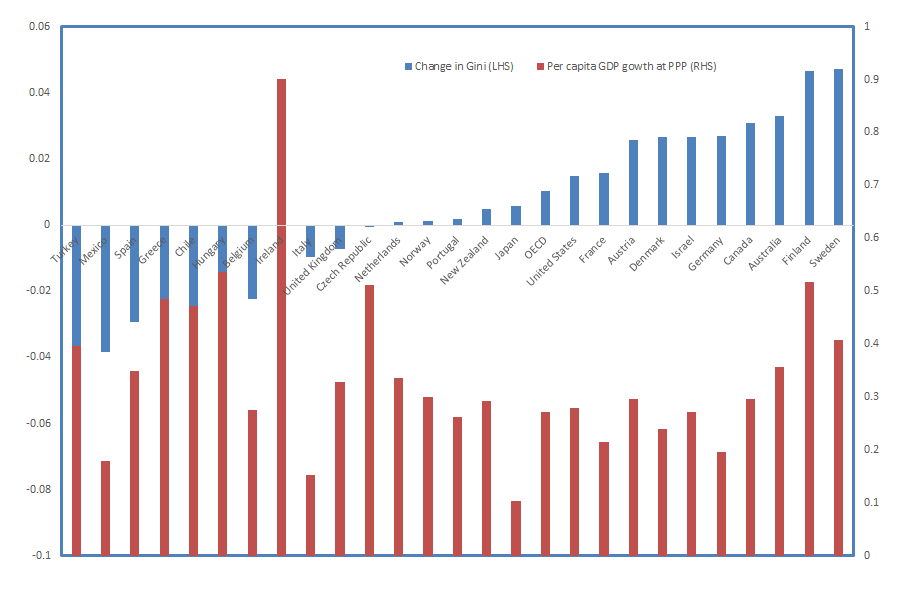 OECD = Organization for Economic Cooperation and Development; PPP = purchasing power parity
Sources: OECD, Divided We Stand: Why Inequality Keeps Rising, December 2011. Because some countries do not record data in all years, these are constructed as averages, from the mid-1990s (1993-1996) and the most recent period in the dataset (2006-2009). Per capita GDP at PPP data are from the World Bank for the same period.

The elephant graph remains critical to understanding what happened to the world’s population over the last two decades. But its message is largely positive: Most incomes grew by 30 to 50 percent and gains were broadly shared across various countries and income groups, with the notable exceptions of the Soviet satellites and Japan. China’s population, much of which was poor, has reaped enormous returns over the period. The most worrisome feature of the graph is that the world’s poorest continue to suffer (but that is a topic for a different day).

Let’s stop using this particular graph to highlight the dangers of globalization for most workers in advanced countries. The graph works as a measure of global inequality, showing the remarkable rise of the world’s lower and middle classes, especially China. It cannot, however, speak to income gains and inequality in advanced countries as a group, because performance has varied widely. In any event, tracing the path of worker incomes to any single cause in a rapidly changing world is a stretch.