Curbing the Growth of US International Debt

A companion post discusses the problem of the declining US net international investment position (NIIP). This post explores possible solutions. Rather than raising trade barriers, which would be economically harmful and have little effect on the trade deficit and the NIIP, the United States should encourage an orderly decline in the foreign exchange value of the dollar. Cutting taxes and expanding the budget deficit, as many are expecting, is a move in the wrong direction; if anything, taxes should be increased modestly to allow exports to increase without sparking excessive inflation or a counterproductive rise in interest rates and the dollar. Ideally, US trading partners would cooperate in an orderly realignment of exchange rates. However, the United States will likely need to act unilaterally to get the process started.

The major appreciation of the dollar in 2000-02 (figure 1) combined with the US housing bubble led to the record trade deficits of around 6 percent of GDP in 2005-06. The Great Recession sharply reduced the US trade deficit in 2009 and the depreciation of the dollar to record low levels in 2010-14 helped to keep the US trade deficit in a range of 2 to 3 percent of GDP in 2010-16. A significant adjustment was achieved, but not enough to prevent a continued decline in the ratio of NIIP to GDP. (The trade deficit and NIIP are displayed in the companion post.) 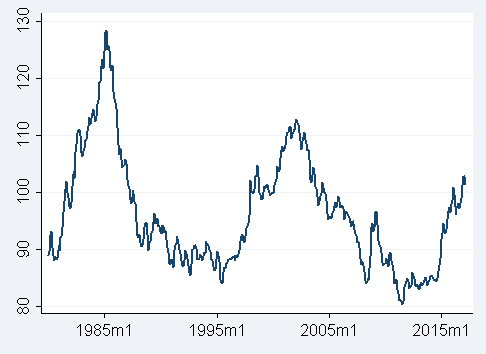 In a forthcoming book, Currency Conflict and Trade Policy: A New Strategy for the United States, Fred Bergsten and I urge the United States to announce a policy of “countervailing currency intervention” to offset the effects of official currency intervention by G-20 countries with large trade surpluses. This would effectively replace the “strong dollar” policy with an “appropriate dollar” policy. In addition, the United States should work with its G-20 partners and with the International Monetary Fund on guidelines for exchange rate policies to prevent the buildup of unsustainable trade deficits and surpluses. These policies would remove the threat of future foreign official intervention to support the dollar when the United States has a large trade deficit. The dollar likely would fall immediately as financial markets respond to the increased future downside risks for its value.

To prevent the US economy from overheating as the dollar falls and the trade deficit narrows, saving would have to increase or investment decrease by a comparable amount. Ideally, the fiscal deficit would be cut to raise national saving, holding down interest rates and contributing to the dollar’s decline. If the dollar were to decline without any fiscal contraction, monetary policy could encourage both more private saving and less private investment by raising interest rates, but higher US interest rates would make US assets more attractive to foreigners, likely unwinding some of the needed dollar depreciation.

At present, the United States faces the risk that tax cuts may raise the US fiscal deficit, the opposite direction of what would help to reduce the trade deficit. Macroeconomic Advisers recently estimated that the budget plans of the House Republicans would put further upward pressure on the dollar and widen the trade deficit to around 5 percent of GDP by 2021.[3] The NIIP would decline at an accelerated rate into uncharted territory.

The US NIIP is approaching a level at which other countries have faced financing difficulties and abrupt adjustments. The dollar’s role as the world’s primary currency for foreign exchange reserves, international lending, and trade invoicing may allow the United States to borrow relatively more than other countries. On the other hand, the large size of the US economy means that foreign investors are far more exposed to risks in the United States than to risks in any other country. Historically, financial markets have tended to oscillate between periods of excessive exuberance and excessive gloom. Policymakers should take steps now to prevent an overaccumulation of debt that may need to be unwound in the future.

[1] Based on October 2016 data, Cline (2016) estimated that the dollar was overvalued by 8 percent. Cline’s estimate is based on returning the deficit to 3 percent of GDP; relative to a target of 2 percent of GDP, the dollar would have been overvalued by 16 percent. A 14 percent depreciation would eliminate a 16 percent overvaluation  (1.00/1.16=0.86). As of late March 2017, movements in key nominal exchange rates suggest that the broad real dollar is close to the October 2016 level on which these calculations are based.

[2] Cline (2016) estimates a negative trend in the US trade balance, implying that a gradual real depreciation is necessary just to maintain a stable deficit.

China's Lending Activities and the US Debt

How to defuse the debt ceiling for generations to come