In the past three months the possibility for an orderly Brexit has increased markedly. In particular, the European Union and United Kingdom have negotiated a transition period lasting two years. And several thorny issues around the treatment of EU citizens in the United Kingdom have been clarified.

The inaugural Brexit Readiness Score gave low grades on the preparedness of the UK government in nearly all areas, cumulating to an aggregate score of 9 out of 100 points. After progress in several areas over the past quarter, the aggregate score has gone up to 22.

This is the first quarterly update of the index to track progress. Based on available data, each component is scored on a scale of 0 (no progress) to 10 (full readiness). The 10 components are: 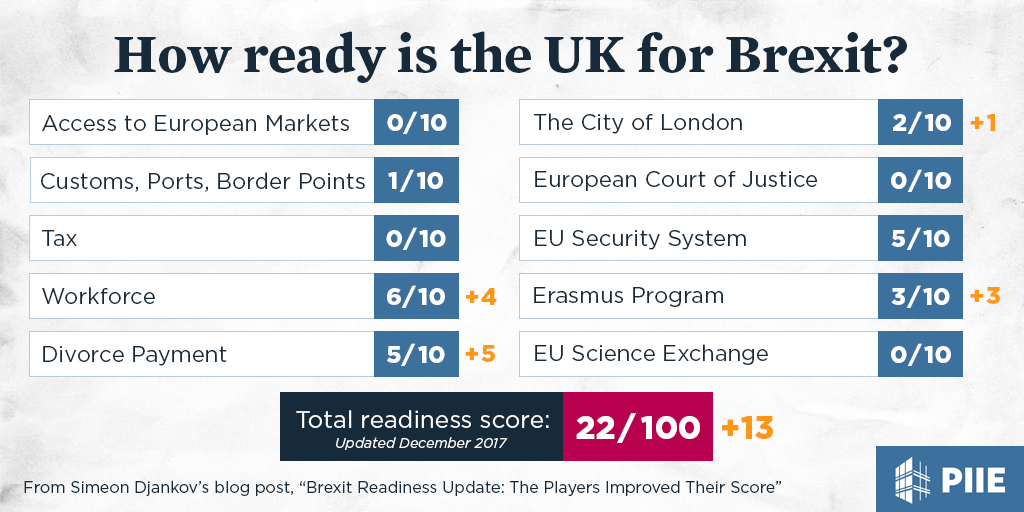 1. Access to European Markets – Tracks the progress of the trade negotiations on accessing European markets. The European Commission has stressed that trade negotiations can proceed only after the treatment of EU citizens living and working in the United Kingdom is clarified and after the “divorce bill” is settled.

2. Customs, Ports, and Border Points – Assesses whether import and export rules and related infrastructure are in place and can be implemented after Brexit.

Score: 1 (No change since September)

(Some estimates on the actual needs have been made. The issue of a hard border with Northern Ireland is shaping up to be among the most difficult to resolve. Ireland has threatened to block further Brexit negotiations unless this issue is resolved.)

3. Tax – Captures the readiness of the UK tax administration to handle changes to the value-added tax (VAT) arising from leaving the customs union.

4. EU Professionals and “Self-sufficient” Citizens – Assesses Brexit’s impact on the workforce, with an emphasis on visa and work permit requirements for European nationals. The UK government had proposed requiring “self-sufficient” EU citizens such as stay-home parents and students to have UK private health insurance or comprehensive sickness insurance.

(Both the United Kingdom and the European Union said in December that the agreement would ensure that EU nationals in the United Kingdom would retain the same rights after Brexit as they enjoyed before. The UK government has removed the requirement for “self-sufficient EU citizens to "demonstrate Comprehensive Sickness Insurance.")

5. Payment for Outstanding Future Obligations – Agreement on the final Brexit "divorce bill" — the share of EU liabilities the United Kingdom will pay upon leaving the bloc.

(The United Kingdom agreed in December to the terms of a financial settlement that could see the country paying a net amount of at least $59 billion over a period of several years.)

6. The City of London – Captures the regulatory revisions needed to ensure that UK-based financial institutions can continue to operate in the European Union. Their operations involve passporting and other adjustments.

(The banking community has warned about the dangers of business moving to New York and other locations without clarity on a transitional period; the negotiated transition period has allayed immediate fears.)

8. EU Security System – Evaluates the access the United Kingdom can negotiate to the data of the Second Generation Schengen Information System, which issues alerts to officers and border staff about suspects, foreign fighters, and missing people; the European arrest warrant process, under which criminal suspects can be speedily extradited between EU states; and Europol, the EU agency that coordinates continent-wide crime-fighting operations and the exchange of intelligence.

(Home Secretary Amber Rudd proposed in September 2017 an EU-UK security treaty not dependent on Brexit talks. Negotiations in this area will be part of the second phase of discussions with the European Union, starting in January 2018.)

9. Erasmus Program –Evaluates the transitional and post-Brexit arrangements for the Erasmus+ program, which gives UK students the chance to study or gain work experience in the European Union and reciprocates the same to EU students in the United Kingdom.

(In December, British Prime Minister Theresa May praised Erasmus+ and confirmed the United Kingdom would still be involved after Brexit. Details yet to be negotiated).

10. EU Science Exchange – Horizon 2020, the EU program on funding research, will be out of reach after Brexit. For the many EU nationals at UK universities, the incentives to transfer to EU universities will be high. Negotiating either a transitional period or continued participation in the program will maintain the quality of university education.

(Not discussed in the first phase of negotiations)