What happens when efforts to combat inflation collide with government deficits so large that they force the central bank to buy up debt, print money, and thereby drive up inflation? Economists describe this as a collision between inflation targeting and fiscal dominance. Some studies (Kumhof et al. 2008)1 have focused on such cses as examples of a reversal of the traditional roles of monetary and fiscal policies: Central banks are forced to reduce rates when inflation rises, the opposite of their accustomed role, in order to guarantee the stability and solvency of debts and deficits, whereas fiscal policy remains stimulative when it should be reducing deficits to combat inflation.

Brazil, in its current crisis of high deficits and high inflation, is suffering from fiscal dominance. Should the central bank slam the brakes on monetary accommodation? In light of the country's inflationary history, the answer should be no. Rather, in the presence of fiscal dominance the inflation-targeting regime should be temporarily abandoned in favor of reinstituting a crawling exchange rate band. The crawling band would serve the temporary role of a nominal anchor when monetary policy becomes ineffective in combating inflation, as is the case under fiscal dominance. With the country's ample reserves, this approach might buy the government enough time to formulate an adequate fiscal plan, one that addresses and eliminates fiscal dominance within the next two years.

Responding to fiscal dominance under inflation targeting requires the central bank to recognize its responsibility for fiscal solvency as well as price stability. Kumhof et al. argue that optimal monetary policy rules must inevitably contradict the Taylor Principle, holding that nominal interest rates should increase by more than inflation expectations to cool down price pressures.

Is Brazil in fiscal dominance? Figure 1 shows the answer is yes. If the central bank were to attempt strict adherence to the Taylor Principle, it should continue to raise interest rates above the current 14.25 percent—inflation expectations to date have not only failed to stabilize but are far from the stated 4.5 percent target. However, if the central bank were to raise rates by a further 200 or 300 basis points, the interest bill and the nominal deficit would spiral out of control. Brazil's nominal deficit currently stands at 8.8 percent of GDP, up from 3 percent less than 18 months ago. 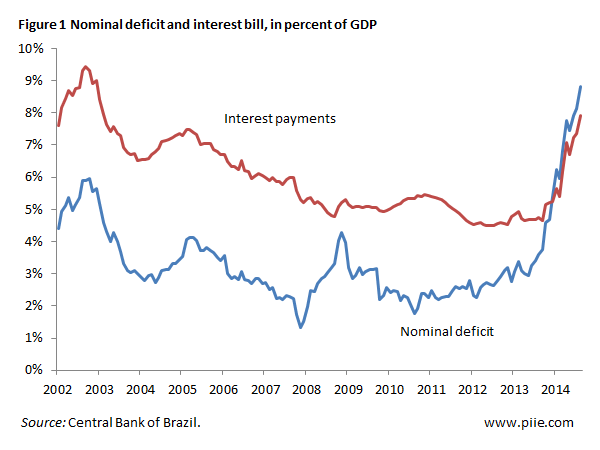 Brazil faces a deep recession this year. The central bank has revised its growth estimates for 2015 to –2.7 percent. But raising interest rates would undermine fiscal sustainability, producing further turbulence in currency markets. Put differently, when monetary policy collides with unhinged fiscal policies, a sharp devaluation of the currency results, raising concerns over credit risk. Currency weakening could more than offset the deflationary effects of the recession, leaving the country in the worst possible equilibrium: a deep slump with high inflation. Brazil's GDP contracted 3 percent in the second quarter of 2015, while inflation is running at 9.5 percent. By all accounts, the country is already there.

Reducing interest rates now, following Kumhof, would only fuel such investor turmoil. One should remember that the government's unsuccessful attempt to reduce interest rates in 2011, when inflation was running above the target ceiling of 6.5 percent, monetary policy lost credibility and became unanchored to inflation expectations. In light of Brazil's inflationary history, interest rate reductions would likely be construed as a de facto return to the dysfunctional macroeconomic framework of the 1980s and part of the 1990s. Put differently, a government that recreated fiscal dominance in the first place cannot be trusted to resolve it with the adoption of policies that would further damage the central bank's reputation.

What is to be done? Given its ample stock of foreign currency reserves, Brazil has the latitude to temporarily abandon the inflation targeting framework in favor of a crawling exchange rate regime to anchor prices. Brazil's sizeable reserves of $370 billion might just give the government the time it needs to elaborate a credible fiscal strategy for exiting fiscal dominance, provided political dysfunction can be resolved. If such an approach fails, Brazil might need to resort to capital controls.

Brazil still has scope for avoiding a full-blown Argentina scenario: a perverse combination of fiscal dominance, high inflation, capital outflows, and capital controls. That window, however, is closing fast.