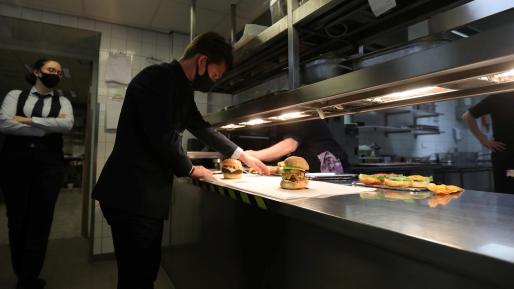 We thank Olivier Blanchard and Marcus Noland for helpful comments.

The COVID-19 economic shock of 2020 cost millions of workers their jobs and shut down countless businesses. Yet, the number of corporate bankruptcy filings fell by 21 percent in major industrial economies compared with 2019 and even more relative to previous years (see figure below).[1]

The average fall in filings hides significant differences across countries: In 2020, Australia’s bankruptcy filings dropped by 41 percent, followed by France’s 39 percent. At the other end of the scale, filings in Luxembourg and Poland remained flat. This is not a sign that the corporate sector in some member economies of the Organization for Economic Cooperation and Development (OECD) is in good health. There was significant financial distress during the pandemic—for example, by early April 2020, 37 percent of small businesses (that had credit card transaction data prior to March 2020) were temporarily or permanently closed in the United States. In Canada’s British Columbia province, 35 percent of small businesses remain closed as of March 2021. An April 2021 survey of UK businesses finds that 17 percent are still closed.

Moreover, many businesses that escaped closure have survived because of downsizing or closing establishment(s) within the firm. The United States’ Business Employment Dynamics (BED) data show, for example, that in the second quarter of 2020 gross job losses from closing and contracting private-sector establishments were 20.4 million, a 50 percent increase from the previous quarter.[2] 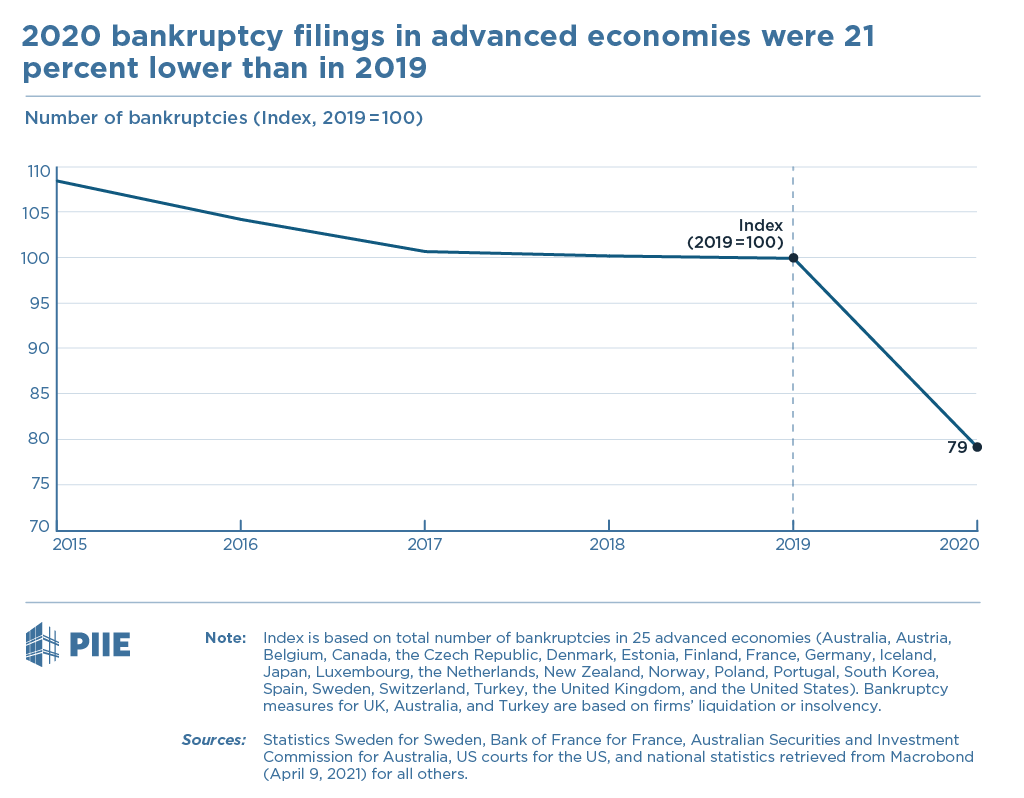 Governments have responded to such closures by giving out large amounts of aid and imposing moratoria on bankruptcy filings to give businesses time to recover. The aid and moratoria had an important secondary effect. Many of the businesses facing insolvency because of the crisis were troubled even before it occurred. Expansive fiscal support and moratoria on filings risk creating zombie firms, as PIIE Senior Fellow Joseph Gagnon has noted. A question arises: Is the observed reduction in bankruptcies a good thing—due to maintaining company value—likely to contribute to future productivity or a bad thing—due to zombification—likely to be a drag on productivity? Our previous research on the effects of bankruptcy regimes around the world shows that the legal changes outlined below are likely to increase firms’ survival chances. This is particularly valuable for the economy in the case of industries with global or regional business linkages, where firm exit means destruction of relational/human capital.

Bankruptcy laws have been revised in seven OECD economies (Australia, Belgium, Germany, Hungary, the Netherlands, Singapore, and the United Kingdom). Three such changes have been common during the pandemic. The first enabled an illiquid company to reach an agreement with its creditors with no involvement from courts. Second, distressed companies are given greater latitude to force a restructuring agreement on every creditor if the majority of creditors agree. And third, suppliers are prevented from stopping deliveries on the ground when the debtor is having trouble paying creditors, as long as the debtor firm pays for its supplies on time—even ahead of bank creditors.

In June 2020, the United Kingdom added three features to its insolvency law. These included introducing a two-month moratorium, allowing a rescue plan to be forced on creditors, and preventing suppliers from stopping deliveries.[3]

Germany also revised its bankruptcy law to enable restructurings. A new insolvency feature is the introduction of a restructuring plan prior to filing for liquidation.[4] Second, it is possible for a company to reach an agreement with its creditors without court involvement. Third, the company in financial distress has the right to a preliminary court meeting to discuss with the competent judge the requirements for a self-administration plan, the composition of the creditors’ committee, and protective orders.

Other governments still have time to consider legal reform to make it easier for distressed companies to restructure. Typically, there is a lag between the onset of an economic crisis and a surge in corporate bankruptcy filings. In the Great Recession, for example, it took two years—to 2009—for bankruptcy cases to peak in the United States. The rise was significant, from 19,695 bankruptcy filings in 2006, the last year before the recession, to over triple this number (60,837) in 2009. The lag in bankruptcy filings following the COVID-19 pandemic may be longer still, partly because of the large fiscal lifelines.[5] Research by PIIE Senior Fellow Nicolas Véron and his coauthors shows that these fiscal packages have been updated and expanded in most OECD economies, often until 2022 and sometimes even beyond.

In addition, government moratoria on bankruptcy filings have been extended several times. An OECD report shows that two-thirds (23 out of 37) of OECD economies have introduced temporary debt payment moratoria in response to the pandemic. For example, France enacted temporary moratorium to the bankruptcy law in May 2020 in response to the pandemic. The decree brought several temporary amendments to French bankruptcy law, including the suspension of insolvency filing duty, extension of conciliation procedure’s duration, and the possibility for management to adopt safeguard and restructuring plans. Some of the measures from the May 2020 decree, such as protections for debtors in conciliation, were extended to the end of 2021.

It Takes Time for New Procedures to Be Used

The changes in bankruptcy law in these OECD economies are one part of a larger package of recovery measures taken by governments in response to the pandemic. Previous experience, for example, during the East Asian financial crisis, shows that such legal changes take time to percolate to distressed firms. The likely longer delay in the wave of bankruptcy filings is of assistance to these distressed firms.

In crisis as well as normal times, the possibility for firms to propose a restructuring plan outside of the formal judicial process is beneficial for the economy. This is because as much as 30 percent of the company value is lost in bankruptcy procedures in high-income countries when the business is liquidated or sold piecemeal. This loss may be avoided altogether or at least attenuated when governments introduce restructuring plan features in their laws.

1. Research on the declining number of filings includes examples from France, Japan, and Switzerland.

2. Under BED definitions, closing means the establishment has positive employment in the previous quarter but has zero employment reported in the current quarter. Closing can be firm death or temporary shutdowns.

3. The Dutch restructuring legislation, which came into force January 1, 2021, allows managers of financially distressed firms to propose a restructuring plan for approval by creditors (secured, preferential, and unsecured) and shareholders. A simple majority is required for the plan to take effect. Singapore, a jurisdiction that closely follows the UK legal tradition, has amended its insolvency legislation in similar ways in the second half of 2020. These changes were, however, the result of a multiyear legislative process, sped up by the effects of the pandemic on Singaporean businesses.

5. A study on 12 European members of the OECD (Belgium, the Czech Republic, Finland, France, Greece, Hungary, Italy, Poland, Portugal, Slovakia, Slovenia, and Spain) and Romania shows that a scenario of continued fiscal support in 2021 would delay insolvencies.