Athletes and CEOs: What Do Their Earnings Tell Us about the Income (and Taxation) of the Super Rich?

Over the past three decades, earnings at the very top of the US income distribution have increased dramatically faster than those of the typical wage earner, a trend clearly illustrated by the earnings growth of top professional athletes. Examining sports earnings growth may give us some insight, not only into why the earnings of CEOs and others at the top have been so strong but also why it may be efficient to tax them more heavily.

In 1967, the average salary in major league baseball (MLB) of $19,000 was just three times the average wages of US workers (figure 1). By 2013, the $2.5 million average baseball salary was 65 times the average US wage. Similar, explosive salary growth is evident in the average earnings in other US sports leagues such as the NFL (National Football League) and NBA (National Basketball Association). 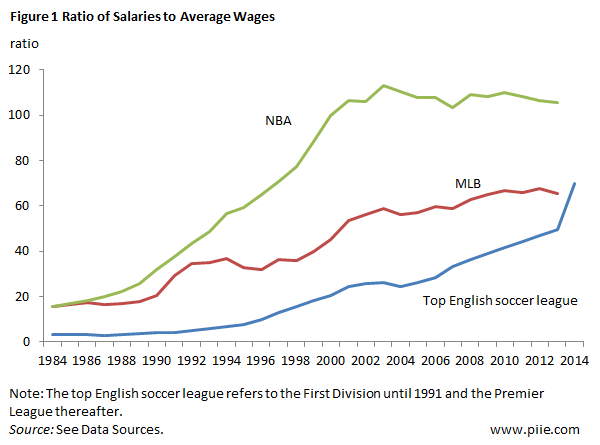 Recently the Securities and Exchange Commission issued a ruling that public companies publish the ratio of CEO pay to that of the average employee. Yet against the backdrop of sports salaries, the explosive growth in earnings of CEOs over the same period does not appear out of line. Mishel and Sabadish (2013) have carefully computed the earnings of the 350 largest US companies. Extrapolating from their data, in 1984 CEOs made an estimated 53 times the compensation of typical production workers. These earnings, which included options granted, rose precipitously to an astounding 411 times average worker compensation by 2000. Thereafter they declined somewhat but were still 202 times average compensation in 2012 (see figure 2). 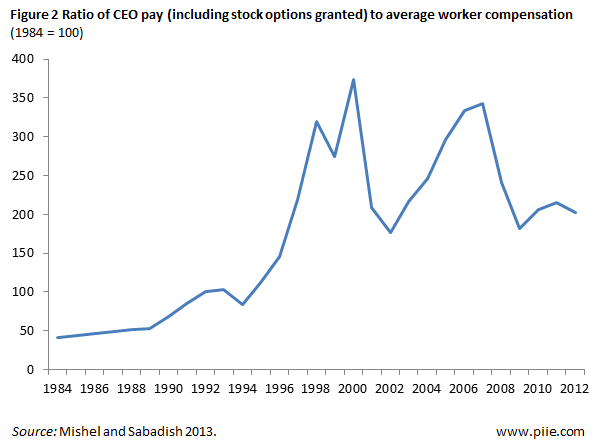 One can argue whether CEOs should be compared to the very best sports players, and clearly many CEO earnings are higher than the salaries (as opposed to endorsement incomes) of most top athletes. Nonetheless, using measures of relative CEO and sports wages, the percentage rise has been quite similar. Relative CEO earnings reached a peak of 800 percent over 1984 levels in 2000 (figure 3). Remarkably, averaging the average relative salary earned in the three sports leagues in 2012 was similarly close to eight times the average earned in 1984. 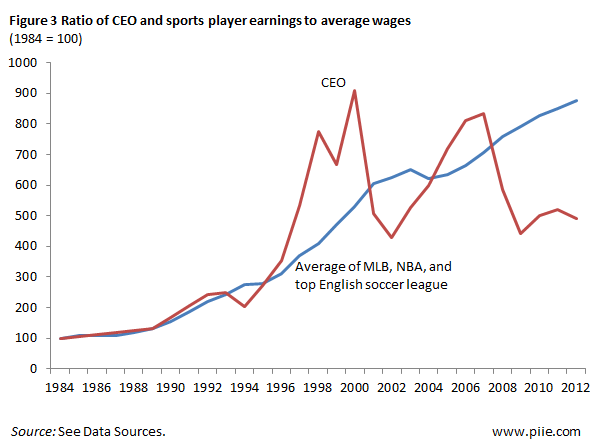 Can a common theory explain these soaring incomes? One theory—first put forward by Alfred Marshall in 1920 and elaborated by Sherwin Rosen in 1981—observes that for certain activities the second best performance is a very poor substitute for the very best—even when the differences between them are small. Sports provide the best example of the importance of being number one.

The key is that the supply of "the best" is by definition fixed, and thus when demand increases there can be no supply response, so prices must rise. Demand will in turn depend on the size of the market, and an important determinant of the size of the market for sporting events is the ability to have a large audience. Marshall understood this well when he pointed out that in his day the incomes of singers were constrained.

"So long as the number of persons who can be reached by a human voice is strictly limited, it is not very likely that any singer will make an advance on the £10,000, said to have been earned in a season by Mrs Billington at the beginning of last century" (Marshall 1920, book VI, chapter XII, p. 43).

It is no surprise, then that the soaring salaries of sports players coincided with the introduction of cable television, which multiplied audiences. A second driver of larger markets is undoubtedly globalization, which probably affects English soccer more than the NBA, since the latter still earns about 90 percent of its income in the United States and is essentially a US sport.

Marshall too was amazed at the incomes some of his contemporaries were making. He observed:

"The causes (of huge fortunes) are chiefly two; firstly, the general growth of wealth; and secondly, the development of new facilities for communication, by which men, who have once attained a commanding position, are enabled to apply their constructive or speculative genius to undertakings vaster, and extending over a wider area, than ever before."

"It is the first cause, almost alone, that enables some barristers to command very high fees; for a rich client whose reputation, or fortune, or both, are at stake will scarcely count any price too high to secure the services of the best man he can get: and it is this again that enables jockeys and painters and musicians of exceptional ability to get very high prices. In all these occupations the highest incomes earned in our own generation are the highest that the world has yet seen" (Marshall 1920, book VI, chapter XII, 41–43).

This theory also applies to other soaring prices and earnings when being number one is important. These include best-selling novels (Harry Potter) and houses in the middle of London or by the ocean. But does this theory also apply to CEOs? Xavier Gabaix and Augustin Landier (2008) have argued that it does. They attribute the rise in US CEO pay to the booming stock market, which since the early 1980s has boosted the value of the typical US firm. As firms become more valuable, they note, it becomes increasingly important to appoint the best CEOs, since their decisions and leadership now make a much bigger difference to the bottom line. When the differences between potential candidates are small and uncertain, those who employ them cannot take the risk of hiring number two. The result is that those expected to be the very best will command extraordinarily high salaries.

If this theory is correct, it has important policy implications, since it implies that the premium incomes earned by the very best are basically pure rents. Alex Rodriguez, LeBron James, and Wayne Rooney would actually be prepared to play as much and as well, even if their incomes were cut by half—indeed their counterparts were playing as much and as well for much lower pay in the 1980s. Economic theory dating back to Henry George who advocated land taxes tells us that the least distortionary taxes are those that are levied when the quantity supplied is fixed. And thus the supply and output of both top sports players and CEOs would be relatively unaffected if they were subject to much higher marginal tax rates. Taxing superstars is thus an efficient way to redistribute income. In this rare case, achieving equity and efficiency may be quite complementary.