On Friday, September 5, Alibaba Group filed details about its forthcoming initial public offering (IPO), suggesting a mid-range valuation of US $155 billion. This would make the Hangzhou-based web retailer the most valuable listed private-sector company headquartered on the Chinese mainland, ahead of its Shenzhen-based online rival Tencent Holdings.

Alibaba's coming of age underlines a continuous trend of the last half decade, illuminatingly analysed by the Peterson Institute's Nick Lardy in his book Markets over Mao. For all the fashionable talk of China's dominant state capitalism and "Guo Jin Min Tui" ("the state advances, the private sector retreats"), the numbers tell a slightly different story, as illustrated by the following figure. 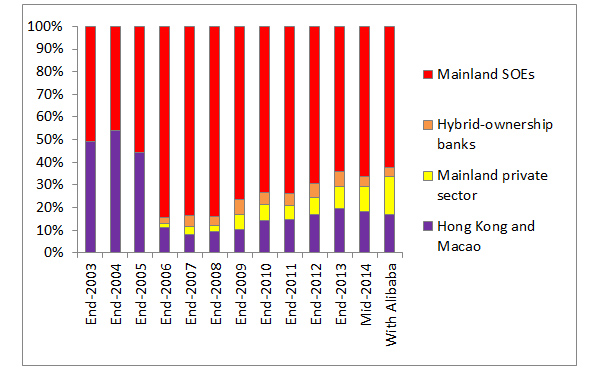 This figure shows the shares of four categories of companies in the aggregate market value of the largest listed Chinese firms, namely those that are featured in the FT Global 500 list of the world's 500 largest listed companies by market capitalization, which is regularly compiled by the Financial Times. Companies are included irrespective of the location of their main stock market listing, whether Hong Kong, Shenzhen, Shanghai or, in Alibaba's case, New York. The three main groups are state-owned enterprises (SOEs) of the People's Republic of China (PRC), such as Petrochina, Industrial and Commercial Bank of China, and China Mobile; companies from Hong Kong and Macao (mostly private-sector but also including municipal companies such as MTR, which operates the profitable Hong Kong metro system), such as Hutchison Whampoa, AIA Insurance, or Sands China; and private-sector companies from the mainland, such as Tencent and Ping An. A smaller fourth group includes banks with hybrid ownership of state and private-sector shareholders (with a public-sector majority), such as China Merchants, Industrial Bank, and Shanghai Pudong Development Bank.

The numbers are as of December 31 of each year except in 2014, where the ranking as of June 30 is used. In the right-hand bar, Alibaba is added to the list on June 30 with the notional market value of US $155 billion. This inclusion results in a corresponding expansion of the relative share of the mainland private sector. (The other companies' market values were not adjusted from their June 30 amount, but this would not materially change the overall picture.)

The chart suggests three observations. First, with about two-thirds of the total, the PRC's government retains a firm control of the "commanding heights" of Chinese business, as has been plain since the massive IPOs of state-owned enterprises in the mid-2000s. Second, however, this measure suggests a continuous erosion of state control for the past half decade, as new entrants such as Tencent and Alibaba gain ground—and as private firms in Hong Kong and Macao have also comparatively recovered somewhat from their low point of the late 2000s. Third, and for the first time with Alibaba's addition to the mix, large private-sector companies from the mainland collectively weigh as much as their peers from Hong Kong and Macao when measured by aggregate value.

As always in China, one must keep in mind that the distinction between the public and private sector remains somewhat fuzzy. Ultimate ownership of private-sector firms is often unclear, and the Communist Party of China retains ways to influence the strategy and behavior of many nominally private-sector companies. Nevertheless, the gradual rise of private-sector companies as compared with the state-owned giants is too continuous to be ignored. Alibaba's IPO is likely to be remembered as the symbolic moment of this momentous transformation of the Chinese corporate landscape.

The Sunnylands Summit: Power for Purpose

Missed Opportunities on Trade and Jobs

Tires, Globalization, China, and the WTO