What Is Going On in the North Korean Military?

In a post from last summer, we argued that the military is occupying a larger role within party and state institutions. The events of the last six months—from the satellite launch and nuclear tests, to the particularly furious reaction to UNSC Resolution 2087 and the closing of Kaesong—appear to have military fingerprints on them. At the same time, highly-visible figures have been purged under Kim Jong Un, perhaps even violently in the case of Ri Yong Ho. Churning at the top continued last week with a change in the leadership of Ministry of the People’s Armed Forces. Analysts such as Andrei Lankov—who knows as much as anyone—has argued that the military is in political retreat (behind the NKNews firewall). What is going in in the North Korean military?

These two trends can be reconciled if we see Kim Jong Un—and whoever is behind him--as building a new coalition of support. The logic of “out with the old, in with the new” is not limited to assuring loyalty; rumors abound about the efforts of the palace to control rents emanating from military enterprises. But we are skeptical of arguments about a resurgence of “civilian control,” whatever that means in such a system. Moreover, recent changes are not necessarily the source for any optimism. First, some of the movements at the top have been lateral. Second, kicking out one set of generals to reward another younger set is not exactly a change in, let alone of, the regime. If “civilian control” results in policies than are no different than the songun status quo, why do we believe the changes are so significant?

The renewed attention to the political-military hierarchy was triggered by the departure of Kim Kyok Sik as Minister of the People’s Armed Forces and his replacement by the relatively unknown Jang Jong Nam. Jang—believed to be in his 50s and thus young by North Korean standards—had been the commander of the First Corps on the southeastern front bordering the DMZ. According to Yonhap, he was recently promoted to a rank between a two- and three-star general.

We know somewhat more about the departing Kim Kyok Sik, and none of it is good. A purported hardliner, Kim had been commander of the IV Corps in the southwest, a command that included units believed to be involved in both the sinking of the Cheonan and the shelling of Yeonpyeong Island.  For these efforts he was promoted to Minister of the People’s Armed forces in November 2012. A month ago he was made a member of the National Defense Commission and an alternate member of the Politburo. There is little question that Kim Kyok Sik was close to the center of power. An analysis of Kim Jong Un’s on-the-spot-guidance tours shows that since Kim took over as Minister, he appeared frequently with Kim Jong Un (fourth most frequently, to be exact, behind Choe Ryong Hae, Jang Song Thaek and Chief of the KPA General Staff Hyon Yong Chol). Kim Kyok Sik was especially prominent during the recent months of tension.

How do we interpret this last move? Michael Madden of North Korea Leadership Watch, writing at NK News (unfortunately now also behind a paywall) outlines the possibilities that have been floated: Kim’s the fall guy for all the recent tension, and thus was demoted to calm Russian and Chinese fears; Kim was just an interim appointment at the MPAF, a steady hand needed for the period of tension that was sure to follow North Korea’s satellite launch and nuclear test; Kim was being blamed for mistakes made by KPA construction units.

But several simple fact casts doubt on some of these theories. First, it is not clear that moving from commander of the IV Corp to the MPAF was really a promotion. Dan Pinkston at the International Crisis Group pointed out to us the MPAF is not really the equivalent of the ROK MND or the U.S. DOD. In peacetime, the MPAF is in charge of administrative affairs and military training, is not part of the cabinet, and reports to the NDC. And rather than being purged altogether, Kim is being transferred back to his previous position as commander of the IV Corps in the southwest. Given the command to which he is returning and the unfortunate history of the NLL, this is not a move that inspires confidence that the time of troubles is over.

The appearance of churning is significant. Kim Jong Il had only four Ministers of the People’s Armed Forces in his entire eighteen year tenure (from 1994 to 2011): O Jin U (died in 1995); Choe Kwang (died in 1997); Kim Il Chol (removed in 2009); and Kim Yong Chun (removed by Kim Jong Eun in 2012). Only one MPAF, Kim Il Chol, was actually replaced for reasons other than natural death during Kim Jong Il’s tenure. By contrast, Jang Jong Nam is now the fourth MPAF in Kim Jong Un’s brief one-plus year in power; the others in addition to Kim Kyok Sik were Kim Yong Chun and Kim Jong Gak.

Nor has churning been limited to the top of the MPAF. Below we update a table in a previous post that shows notable movements in the military and security apparatuses since Kim Jong Un took over in December 2011. As can be seen, not a single one of the five major positions--Minister of State Security, Minister of Public Security, Minister of the People’s Armed Forces, Chief of the KPA General Staff and Director of the KPA General Political Bureau--has been immune from turnover. Among the top military elite, only the heads of specialized security units have remained the same through the succession: the Guard Commander (Yun Jong Rin) and Military Security Commander (Jo Kyong Chol). But as can be seen, some of these moves are lateral and only a few fit the model of an outright purge; age appears a factor in a number of the moves. 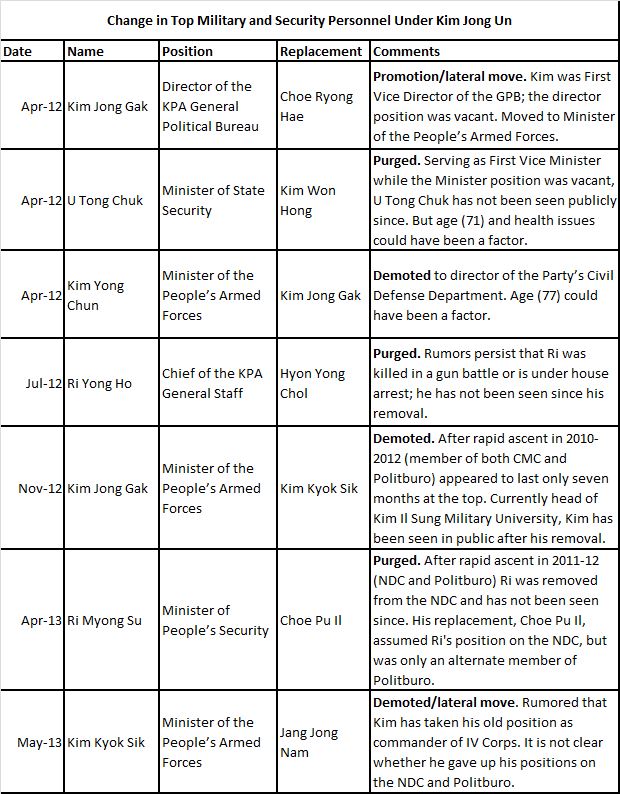 Where are we at the present following this last round of moves? On the one hand, those heading the military and security apparatus appear much weaker than the heavyweights in place when Kim Jong Un took office; the table below lists the top five. These positions are held either by relatively unknown or younger military officials or what we call “civilian military” personnel with close ties to the Kim family. Choe Ryong Hae, head of the important KPA General Political Bureau fits the latter pattern. Although Choe Pu Il at the Ministry of Public Secuirty is a career military man, he’s been tied to the Kim family for many years now.

But none of this analysis can answer the most crucial question. Is the effort to reassert control over the military and promote Kim Jong Un’s own being undertaken in pursuit of a larger political objective of shifting strategic course? Or are we just witnessing generational change with the same songun bargain in place? Readers of the blog will not be surprised to hear our take on this: pray for the former, but expect the latter. 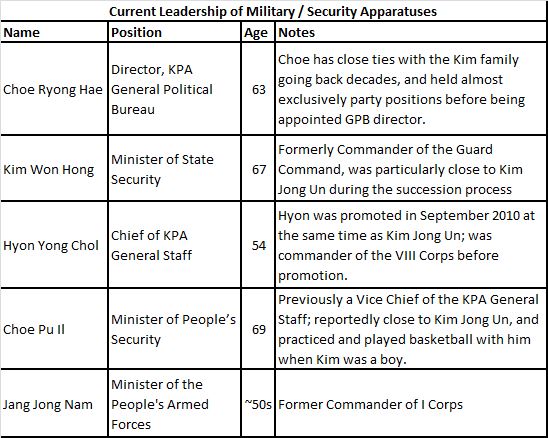