Vulnerability to Sanctions I: Park and Walsh

As the discussion shifts ineluctably towards sanctions in the wake of the fifth test, attention also naturally shifts to DPRK-China trade relations and what—if any—of it is vulnerable to further sanctions, or at least exposure. Two important reports released in the last two weeks shed light on these issues, and we start with a discussion of the new working paper by John Park (Harvard) and Jim Walsh (MIT) on Stopping North Korea Inc: Sanctions Effectiveness and Unintended Consequences.

A distinctive feature of the Park and Walsh study—building on Park’s earlier work at USIP –is the focus on the managers of state-trading companies (STCs) and their efforts to evade sanctions; the study is based in part on interviews with 40 STC managers as well as commercial firms in the region. Rightly—despite a long and useful review of the literature, including on North Korea—Park and Walsh do not enter into the political question of whether sanctions “work” to secure negotiations or denuclearization. The aim is to address whether they have the effect of denying North Korea access to needed financing, export earnings and imports and to what extent.

The report provides a nice summary of the history of STCs, which had their origin in the early 1980s and bear at least a family resemblance to Japanese sogo shosha and South Korea’s “general trading companies.” The core argument of the paper is that the Banco Delta Asia shock forced a search for new financial networks and the Chinese opening, particularly following the visit of Wen Jiabao in 2009, provided new adjustment opportunities (see James Reilly's excellent work on this opening as well).

As sanctions elsewhere started to have effect, North Korean firms adapted by hiring larger, more sophisticated Chinese intermediaries who would provide a veil of protection when dealing with a variety of third parties, both domestic and foreign; they would also handle logistics issues. Crucially, the size of these brokers allows them to effectively provide trade financing for North Korea, financing that it could generally not secure through banking institutions. As they put it, North Korean firms got more deeply embedded in Chinese networks, moving operations into the Northeast in particular while also exploiting opportunities to extend these China-based networks into Hong Kong and Southeast Asia. These activities are aided and abetted by ongoing embassy involvement in sanctions-busting.

An important fine point concerns access to Chinese bank accounts onshore. Because of their exposure to the US clearing system, it is believed that the larger Chinese banks—and certainly the big five—have probably closed accounts that were openly in the name of North Korean entities. But the key word is “openly,” and it appears that Park and Walsh are arguing that smaller banks have fewer qualms. In any case, during the commodity boom financing was available through coal exports and as prices declined from a new push to export labor as well. But as those activities face both market and political constraints, will it require more financing from these brokers as a result?

How do sanctions fit into this story? Park and Walsh argue that their effect is mixed. On the one hand, they have forced the very adjustments that they trace. Because contract prices for North Korean STCs carry higher risk, more sophisticated and deep-pocketed private entities are now playing the broker role rather than Chinese state entities. As we too have argued, sanctions are not just accepted; North Korea adapts.

But some of the more interesting findings and recommendations of the paper focus on how Chinese private sector concerns might be leveraged. In particular, as Chinese firms themselves become more engaged with the world economy, they also come into contact with the compliance culture of counterparties and the need to clean up suspicious transactions. The paper argues that the US should engage both the Chinese government and Chinese private firms more aggressively with respect to supply-chain integrity and compliance.

This is not a crazy idea. In 2013, the Ministry of Commerce, the Ministry of Industry and Information Technology, China Customs Bureau, and the China Atomic Energy Authority collaborated on a joint document entitled “Technical Bulletin #59 on Prohibition of Dual-use Exports to North Korea.” (We covered the document here.) It’s wrong to think of such an elaborate exercise as merely a charade. Nonetheless, the US, South Korea and Japan have to get to work naming names on the firms that are in violation and will need to choose some high-profile cases and come down hard. In New York, the US should simply urge the Chinese government to send appropriate signals to domestic private companies that this sort of activity is unwelcome—and illegal under given Chinese statute. Park and Walsh argue that the same kind of due diligence needs to be forced on other enabling firms; a table summarizes. 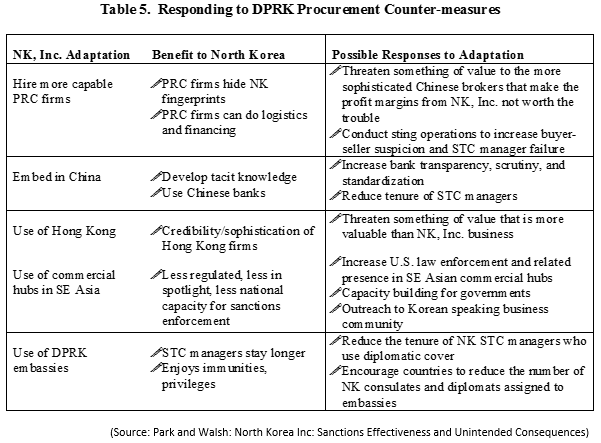 One slightly frustrating element of the report is that it names no names, either on the North Korean or Chinese side. But at the same time the report concludes strongly that that is what needs to be done, precisely as the new Asan-C4ADS report does which we will analyze in more detail on Monday. The speed with which some of the findings of that report made it into the news cycle is astonishing: all North Korea watchers now know that “six subsidiaries of China's Liaoning Hongxiang Group have transacted with sanctioned Burmese and North Korean entities, have been associated with North Korean cyber operators, and have traded in various goods and services that raise proliferation concerns." This is classic actionable intelligence and if there is any hope for upping the ante, it will not come from doing precisely what we have been doing but rather turning the screw. How this is integrated with a broader political strategy is an issue we dealt with at length. But you cannot pursue a two-track strategy of diplomacy and pressure if you have no means of exercising the pressure.

What To Do about North Korea: Will Sanctions Work?