The UN Security Council yesterday passed resolution 2375 just eight days after North Korea’s September 3 nuclear test, far more rapidly than it had imposed sanctions after recent nuclear tests. The final text of the resolution dropped some of the more sweeping demands by the United States but the biggest punch in the resolution is a ban on North Korean textile and apparel exports, which according to KOTRA accounted for $726 million of North Korea’s exports last year—or about 26 percent of total exports—nearly all of which went to China. The resolution also imposes a cap on crude oil exports to North Korea and bans new contracts on North Korean laborers abroad, a marginal tightening relative to UNSCR 2371. But weak reporting requirements will impede verification and call into question just how much impact the resolution will have. There may well be less here than meets the eye. 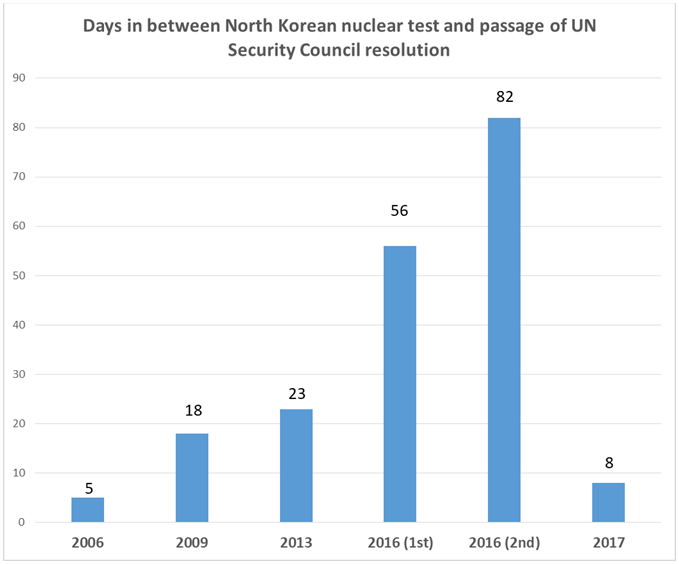 The resolution is in line with past resolutions that have incrementally banned North Korea’s top exports. Naturally, the sanctions target North Korea’s trade with China, which comprises approximately 90 percent of all of North Korea’s global trade. Of the top five DPRK to China exports from 2016, all five are now banned or mostly banned (See below.) This includes coal (which is most of the mineral products category); textiles and apparel; iron and lead ores (which make up the majority of this category); and seafood. As frustration with North Korea has grown, the sanctions have become less and less “targeted.”  In the case of the prohibition on labor-intensive textile and apparel exports, it is increasingly hard to sustain the argument that these sanctions will not affect non-elites.

Although textiles appear to have shrunk from 2015 to 2016, anecdotal evidence suggests that business has recently been doing pretty well. It’s worth noting that it is the first time that an entire non-military manufacturing industry has been sanctioned by the UN.

Last week in a draft resolution the United States had called for a complete ban on crude oil exports to the DPRK, a ban on North Korean labor exports, and an asset freeze for Kim Jong-un. Clearly, most of these asks were non-starters for China and Russia. One has to question the tactic of floating the sweeping draft text.  The final resolution is almost surely broader than what analysts would have predicted, but by circulating the draft text in advance, the Trump Administration has effectively created disappointment with the final outcome. Perhaps the Administration believes that the implicit shaming of China and Russia is somehow worth it.

The final resolution did, however, ban natural gas, refined oil products, and set a cap on crude oil exports not to exceed what a country had exported in the previous twelve months prior to the passage of UNSCR 2375. But North Korea imported relatively small amounts of refined oil from China: Just $115 million in refined oil in 2016 from China, and under $2 million from Russia according to KOTRA and UN Comtrade data. Russia and China exported just one and two million, respectively, in natural gas to the DPRK in 2016.

But implementation of the crude oil cap is likely to be problematic. By its very nature as a cap, implementation involves an accounting exercise and in contrast to a simple ban introduces uncertainty about whether any given shipment is compliant with the resolution or not. And crucially, as has been documented in this blog upteen times (see here and here), China stopped reporting its crude oil exports to North Korea in January 2014. How is one supposed to implement or evaluate adherence to the UNSCR when China—North Korea’s main trade partner—suppresses the relevant data! And Russia, which has at times signaled an interest in taking up any slack created by Chinese sanctions enforcement, is no more transparent. For the latest documentation of sanctions evasion efforts by China and others, see the UN panel of experts report released last week.

KOTRA’s annual DPRK trade report imputes North Korean crude oil import figures at $230 million, holding the volume of 525,000 metric tons constant from the previous year. But the figure could be much larger. Taking the average monthly amount of crude oil exports China reported for North Korea in 2013 and imputing the amount for the entire year, yields 771,000 metric tons.  While the ban on refined oil mandated detailed reporting requirements for member countries, the resolution curiously lists no specific reporting requirements for crude.

Last month’s UNSCR 2371 banned any new North Korean laborers abroad, and 2375 took the next step of banning the contracts of North Korean laborers going forward, while not canceling current contracts. This seems to suggest that once a North Korean labor contract expires, he or she will be sent home to the DPRK. But again, no specific reporting requirements will make compliance hard to verify, and the work of intrepid journalists will be more important than ever. 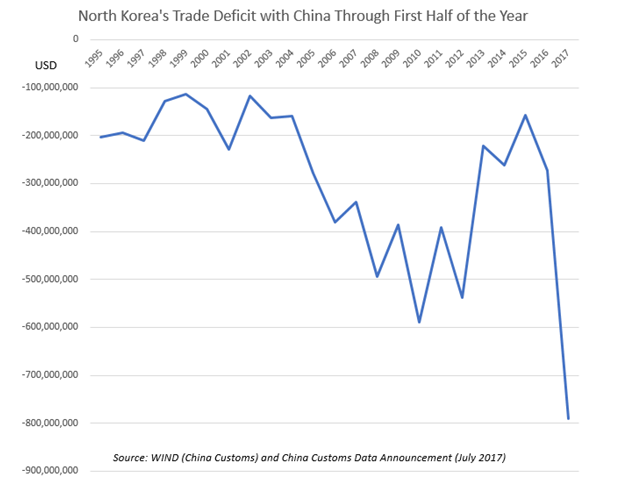 As noted on this blog last month, the trade deficit with North Korea is at unprecedented levels and although a balance of payments crisis could be coming, signs of it don’t yet exist. If sanctions are going to bite, restrictions on North Korean imports are going to have to play more heavily in the sanctions cocktail.

In short, the good news is that the Security Council broke from past tendencies and passed a sanctions resolution quickly. The bad news is that it didn’t break with past practices and produce a simple, binding resolution. While the resolution is broader than past resolutions, specifically targeting oil and textiles for the first time, provisions embodied in UNSCR 2375 will facilitate less than rigorous implementation, generating almost the worst of all worlds: it will be subject to criticism on humanitarian grounds, but will not actually have the impact on North Korean policy that harder hitting sanctions might. And from a purely diplomatic standpoint, the Trump Administration’s tactic of floating a sweeping resolution and then settling for something far more modest is a head scratcher. Stay tuned.

The (Non) Impact of UN Sanctions on North Korea