A Strong and Prosperous Nation: Some Indicators

I recently attended a conference at the Korea Ex-Im Bank and one of the more interesting papers was presented by Bae Jong-ryel ("North Korea's Dilemma: The 'Strong and Prosperous' Nation and the Market Economy.") Jaesung Ryu provides a summary of one interesting finding of the paper: the benchmarks the regime is using to define a “strong and prosperous nation.”

According to Bae, North Korea has defined target production levels for achieving the goal of being a strong and prosperous nation in 2012 in terms of the achievements of the late 1980s, when the economy was at its peak. These benchmarks appeared in the 2009 Joint Editorial, which states that “an important task facing us in the economic construction at present is to push the effort to put production on a normal track and…[thus surpass] the high-water mark in production in all sectors of the national economy.” According to Bae, they have been advanced by North Korean researchers such as Kim Chul-jun, the director of the Economics Institute of the North Korean Social Science Academy and by Ri Ki-song in “Current Key Objectives in Constructing a Strong Socialist Economy” which appeared in Economic Studies in 2009.

It must be somewhat dispiriting for economic planners to use figures that are more than 20 years old as a benchmark for the country’s coming out as a strong and prosperous nation. And then there are the contradictions—if we can use the term—in the misuse of the data. If the data from the late 1980s is inflated, then it makes the current task all that much harder unless those numbers are inflated as well.

Bae calculates the ‘completion rate’ of these goals using South Korean estimates, comparing 2008 figures to the peak values of the late 1980s. North Korea falls behind in pretty much every measure of physical output chosen; the economy has still not recovered from the collapse of the 1990s. Only in trade does the regime show some success, but even we expected more gains here. Despite Kaesong and the rapid growth the China trade, North Korea’s trade barely surpasses the late Soviet era. 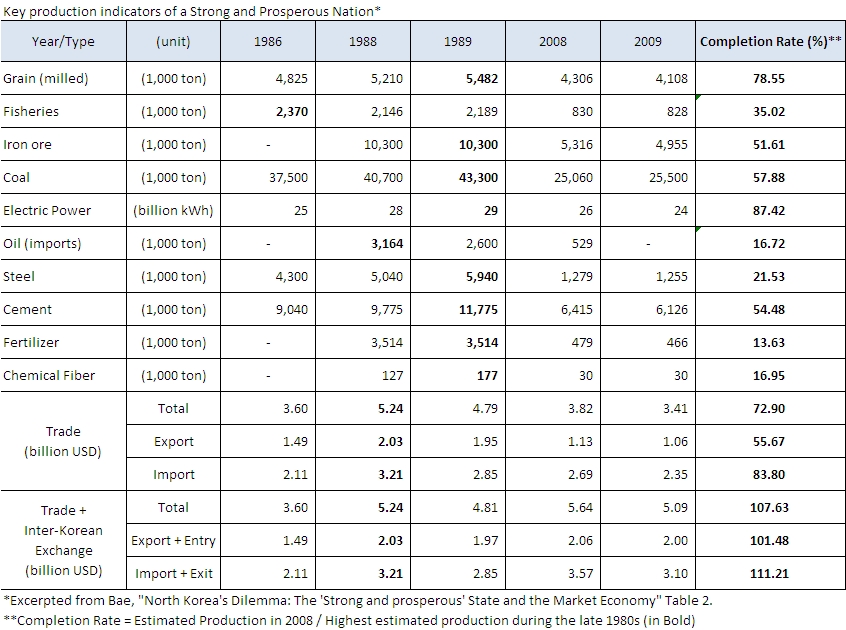 Bae points out that Kim Jong-il’s June 18 2008 remarks to party and state officials, entitled “On the Promotion of A Superior Socialist Economy as We Adhere to the Principles of Socialism in Economic Projects” (“경제사업에서 사회주의 원칙을 고수하며 사회주의 경제의 우월성을 높이 발양시킬 데 대하여”) has provided guidelines for where the line between state socialism and the market economy should be drawn. In essence, the 2008 remarks provided a rationale to accept some marketization while strongly opposing a transition to a market economy; in Kim Jong Il’s own words, “state-regulated markets do not necessarily lead to a market economy.” Such a transition, according to Kim, would be anti-socialist as well as anti-Juche and thus unacceptable on ideological grounds.

Anti-reformist measures that we track in Witness to Transformation, such as restricting the timing and scope of markets (October 2008), downsizing of the Pyongsung wholesale market (June 2009), and the currency debacle (November 2009) should be interpreted in terms of this new line, even though the regime has obviously compromised with the market as a necessary evil. Bae also points out, as do we, that this “reform in reverse” has led to a shrinking of the number of market retailers, the so-called North Korean middle class, and a concentration of wealth to large and powerful wholesale dealers and holders of foreign exchange, many no doubt officials.