Last year, Ankit Panda at The Diplomat noted the significance of a high-level North Korea–China meeting in June 2016. Ri Su-yong, Korean Workers’ Party (KWP) Politburo member and a former foreign minister, led a delegation with a North Korean briefing to Beijing following the KWP Congress that met not only with Song Tao, then a top Chinese Communist Party (CCP) official but with none other than State Councilor Yang Jiechi and President Xi Jinping. Moreover, Ri delivered a personal message from Kim Jong-un.

In the year before that, such visits had not only been scarce but also unhappy. An October 2015 visit by Liu Yunshan, a Politburo Standing Committee member, was played to the hilt by the North Koreans, with Liu standing beside Kim Jong-un on a balcony overlooking the parade celebrating the 70th anniversary of the Korean Workers' Party. In February 2016, however, Chinese Six Party Talks envoy Wu Dawei dropped into Pyongyang to “exchange views” following the nuclear test, and appears to have gotten precisely nothing. The peninsula descended into one of its predictable post-nuclear test spirals. Days after Wu Dawei’s visit, the North Koreans undertook another satellite launch on February 6.

Data show that the erratic pattern mirrored a sharp decline in meetings of lower-level Chinese even from those institutions that we would expect to be favorably disposed toward North Korea. The three graphs below show the number of bilateral meetings involving three sets of Chinese actors: the International Liaison Department of the Central Committee of the CCP; People’s Liberation Army (PLA) officials and officers; and officials from the two border provinces of Liaoning and Jilin, with their obvious economic interests in bilateral ties. The data pretty much speak for themselves. Following the grand experiment of the late Hu Jintao years with a policy of deep political and economic engagement, the change of leadership in both Pyongyang and Beijing and the more aggressive military posturing of Kim Jong-un combined to produce clear evidence of a falling out. And there is at least some evidence for the fact that it was not simply China that was holding back but North Korea that was spurning its patron. 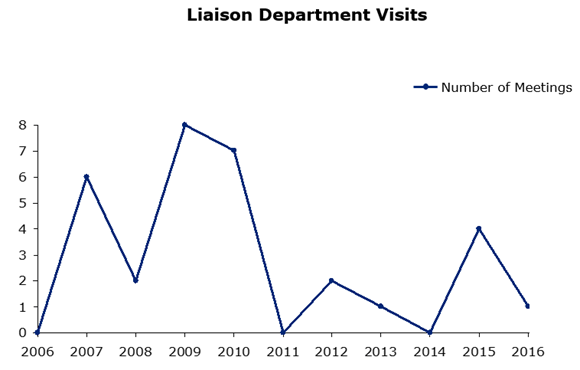 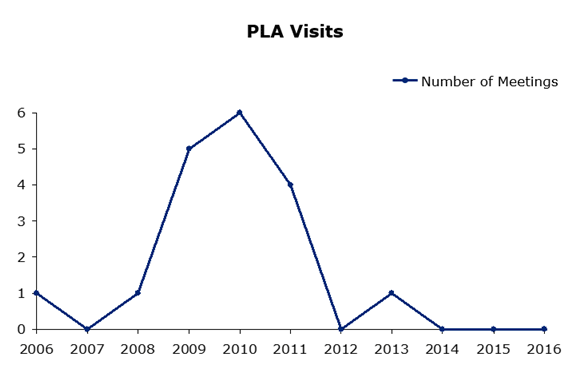 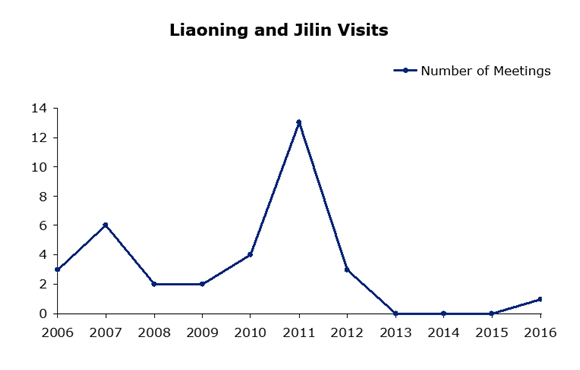 China has a tradition of sending envoys to the socialist countries on its border in the wake of Party Congresses; the 19th thus provided an opportunity. In contrast to the 2016 North Korean visit, however, Song Tao, head of the Communist Party’s international department, finished his four-day trip to North Korea last week with precious little to show. During the Foreign Ministry press conference prior to Song Tao’s trip, it was made clear that the scope of communications extended beyond the Party Congress to exchanging issues of mutual concern; from China’s side, this was designed to be more than a courtesy call. To start with the symbolic, however, it is clear that he did not meet with Kim Jong-un, a meeting which was certainly in the realm of expectations, given how the North Koreans were treated in Beijing following their Party Congress last year. But it is also clear from the absence of any Chinese coverage of results that nothing substantive got done either, in terms of pushing the diplomatic process forward.

China has always argued that sanctions are instrumental to restarting talks, and we agree completely with this position. But there is one problem: It is hard to hold talks with an empty chair. China is desperately signaling that it is trying, but diplomatic—as compared to economic—leverage remains limited. That message is clearly ringing hollow in Washington if McMaster's comments in an extended Fox News interview are any indication. Praising China for shifting ground since Trump’s inauguration, he also signaled the US administration’s view that Beijing is simply not getting the job done.

Janos Kornai on Politics in the Socialist and Post-Socialist World