Slave to the Blog: Where in the World Is Ambassador Rodman?

Well, it’s August and Ambassador Dennis Rodman is supposed to be vacationing with Kim Jong-un and freeing Kenneth Bae.  But there have been no Worm sightings in the DPRK.  So to cop from that well-known children’s game, Where in the World Is Ambassador Rodman? 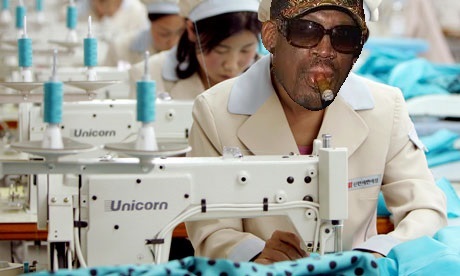 Maybe he is at Kaesong!  The North Koreans shut it down, but when South Korea announced that they would pick up the $250 million insurance tab, pay off the firms, and take legal possession of the assets, the North Koreans came back to the table.  Jaesung Ryu fills in the substance:

"On August 7th, the MOU announced that the South and North Exchange and Cooperation Promotion Council, a consultative body, established by law, (to discuss and coordinate inter-Korean economic cooperation policy matters and decide on important issues) decided to start paying KIC companies economic cooperation insurance, which 109 companies have applied so far (worth 289.9 billion KRW / ~260 million USD).
The decision was based on the Implementing Ordinance of the Inter-Korean Cooperation Fund Law (est. 1990) which defines conditions of IKCF usage. There is a clause that permits IKCF to be used for insurance payments in case an agreement between South and North is abrogated or not honored. The establishment of the insurance was based on the IKCF law itself where it defined the purpose of the insurance to compensate losses arising from reasons other than managerial ones in the business of inter-Korean trade and promotion of economic cooperation.
MOU, saying that the current situation is clearly applicable for paying out the insurance, due entirely to North Korea's fault, decided to doll out the fund to companies, with Korea Eximbank as the handling institution.
More importantly, though seemingly less emphasized in the press release, was that once the companies receive the insurance fee (which will cover up to 90% of their investment cost) the government will acquire subrogation rights to each company's investments in the complex (factories and other assets). Given effective ownership rights, the government can do whatever they want, including an overall shutdown of the KIC (once insurance is paid to companies, which have been underway since yesterday).  (MOU press release on decision to pay KIC companies, in Korean, relevant yonhap article in English).
So, like it or not, it seems that North Korea has got to deal with the South Korean government from now on, and lose any hopeful leverage by keeping the companies in their pockets. I guess that increases the bargaining power for the South Korean government, which seems to be prepared to bear the full cost of losing business, in addition to the incurred losses since the KIC suspension. MOU previously warned, in the aftermath of the 6th meeting breakdown, that serious measures wiill have to be implemented if the North fails to come back to the talks.
After about an hour and a half since the announcement, North Korean CPRK announced to lift the temporary suspension of the KIC and allow full passage of South Korean workers in and out of the complex, guarantee return of the North Korean workers and personal safety and property protection and proposed to resume talks on August 14th, a day before national liberation day. Shortly after, the MOU responded and accepted the terms.
So that's where we are now-waiting for the 14th of August. I must also point out that August 15th is an important holiday for both Koreas; not just because of its celebrations, but also because it has been often used as an occasion where the South Korean President would signal the administration's direction for its North Korea policy (LMB also used Aug 15 to bring up talks about unification tax, last year). Both North and South Korea being aware of this political calender, plus the changing bargaining structure owing to the payment of insurances, the upcoming meeting might as well be a definitive one that will set the tone and the overall status of inter-Korean relations for the next few years."

Now the issue is how the North Koreans can establish a credible pre-commitment to not interfere with operations in the future.  A long tax holiday or suspension of wage payments would make a start.  Something tells me that the North Koreans may have underestimated President Park.  She doesn’t strike me as the type to tape a sign on her back that says “Kick me.” Girls can play tough, too.  (Just ask my son.) Still, this is politics, not business, and the South Koreans are likely to take a softer line than investors would in a less politicized environment.

If he isn't at KIC, I wonder where he could be? Well, Ambassador Rodman doesn’t seem to be at Kenneth Bae’s bedside. The hospitalized Mr. Bae only gets visits from Swedish diplomats.

Maybe he is doing basketball diplomacy!, though as rumor has it, Worm and his handler were such divas that the North Koreans are not exactly looking forward to a return visit. As Dan Pinkston observed, “once Kim Jong-un makes a strategic decision to return to real diplomacy, abandon sŏn’gun, and embark on denuclearisation, President Obama can call Kim to discuss the details of the annual Obama-Kim Basketball Tournament for Peace. Just as ping-pong diplomacy helped thaw relations between the U.S and China in the 1970s, basketball diplomacy, with appropriate implementation, could help thaw relations between the U.S and North Korea. ” Let’s say a World  Peace Basketball Tournament (someone call Metta World Peace!) played at a neutral site, maybe Switzerland, the Young General’s old stomping ground.

But hey, it’s a vacation—not work, maybe he is at MasikPass!