A few items came to our attention that warrant bundling into a “count your blessings” post for the holiday week.

First up, UNICEF has issued a press release—but not the full report—on its recent nutrition survey. The survey is national in scope, and was a joint venture between domestic agencies and UNICEF, the World Food Programme and the World Health Organization. The instrument was designed to assess the severity, extent, and distribution of malnutrition of the country’s women and children. It also looked at feeding practices, micronutrient uptake and women’s anemia. The last such survey was conducted in 2009; we commented on that study over the summer in the context of the release of the 2012 edition of the UN Overview of Needs and Assistance (in .pdf).

UNICEF puts a positive spin on developments by noting that “stunting has decreased from 32.3 per cent to 27.9 per cent since 2009, while acute malnutrition is down from 5.2 per cent to 4 per cent and the incidence of underweight children is down from 18.8 per cent to 15.5 per cent.” Stunting is defined as a height-for-age which is two standard deviations below the median of an international reference established by the WHO. Stunting is an indicator not of short-term nutritional status, but of long-term exposure to deprivation and malnutrition. In effect, it is a measure of damage done; stunting is not fully reversible. Rather, children are “hostage to life-long ill-health and reduced educational and career prospects as a result of a lack of much needed proteins, fruits, vegetables and fats” in the early stages of their lives.

Children’s health is intimately connected with women’s health, and that picture is not comforting either. Almost one-third of women aged 15 to 49—encompassing the peak child-bearing years—suffer from anemia and one in four surveyed were malnourished.

Turning from the well-known humanitarian problems to doing something about it, The Atlantic has a fascinating portrait of Rob Springs in its most recent issue. Springs is the Korean-speaking Arizona rancher—that alone is interesting--who founded Global Resource Services,  an NGO focusing on North Korea.  Springs started the organization with some seed money from the Southern Baptist Church, and has parlayed it into an organization that has done dozens of projects on the ground. One of the favored models is to pair practical projects—from goat breeding to medical training--with technical assistance from relevant universities. Among his more unbelievable ventures was bringing Georgia’s Sons of Jubal choir to North Korea; a clip of their performance of the Battle Hymn of the Republic, although focused almost entirely on the chorus rather than the audience, gives you a feel. The story reminds us of how North Korea manages to collect the most odd group of  genuine altruists.

From humanitarian issues to the human rights agenda, Melanie Kirkpatrick reminds us of religious persecution at the WSJ. She suggests Christianity may be growing in the North as a result of border crossers who return to proselytize.

Finally, a postcard for the season. We have all seen the satellite pictures of the Korean peninsula at night; they are almost a cliche. But on September 24, 2012--with clear skies--NASA’s Suomi NPP satellite captured this updated view, which is much sharper than its predecessors. Bringing light to North Korea strikes us a perfect metaphor for the holiday season. Best to you and yours. 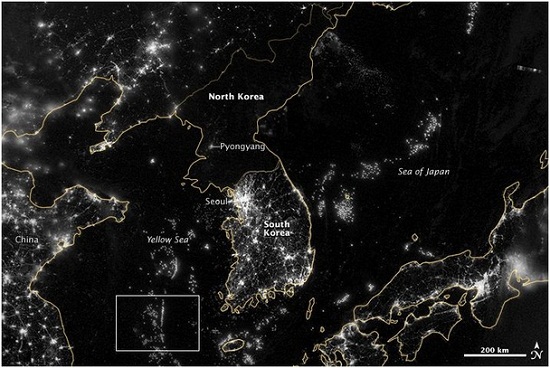