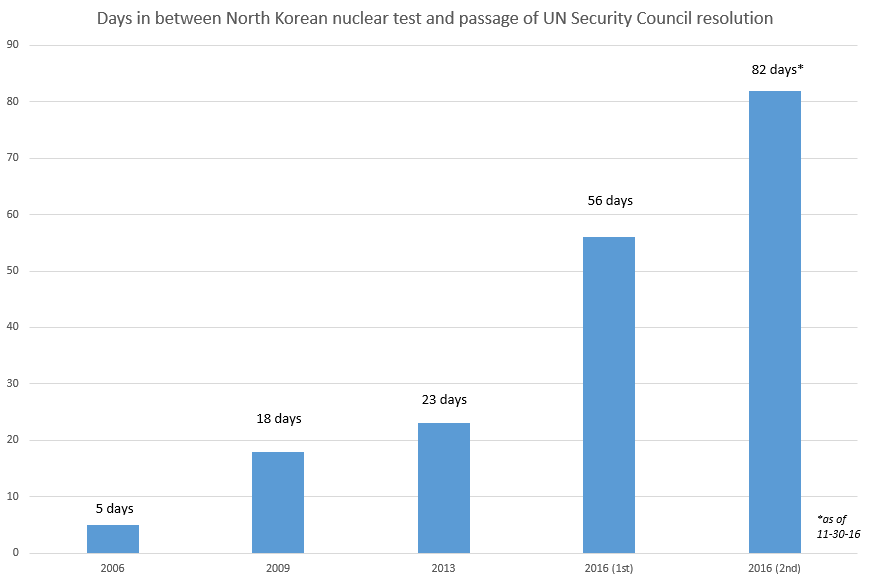 If, as rumored, the UNSC passes a sanctions resolution tomorrow, it will be 82 days since North Korea’s fifth nuclear test, marking a nearly exponential lengthening of time between nuclear tests and Security Council actions. For all the diplomatic breast-beating, “unacceptable” seems pretty acceptable after all.

Our collective lethargy (or at least China’s) is evident in the trade data. The majority of North Korea’s trade is not specifically sanctioned. But it is not unreasonable to expect that with the nuclear tests and the resultant sanctions, the risk premium on all trade has risen. Instead, after an unexplained drop-off in North Korean exports in May, trade has been stable (see chart below). Besides coal and iron exports UNSCR 2270 banned the establishment of new banking relationships and required that “joint ventures, ownership interests and correspondent banking relationships with DPRK banks” be severed within 90 days of the resolution’s passage (the 90-day period was reached at the end of May). It is unlikely China has significantly clamped down on China-DPRK banking relationships if trade at these levels continues undisturbed. Moreover, the figure below does not include Chinese oil exports to North Korea, which China Customs mysteriously stopped reporting in 2014 but KOTRA independently estimated last year to be around $280 million per year. Sharply curtailing oil exports would certainly have had material effect, so we can assume that those exports are continuing and should be added to the totals here. 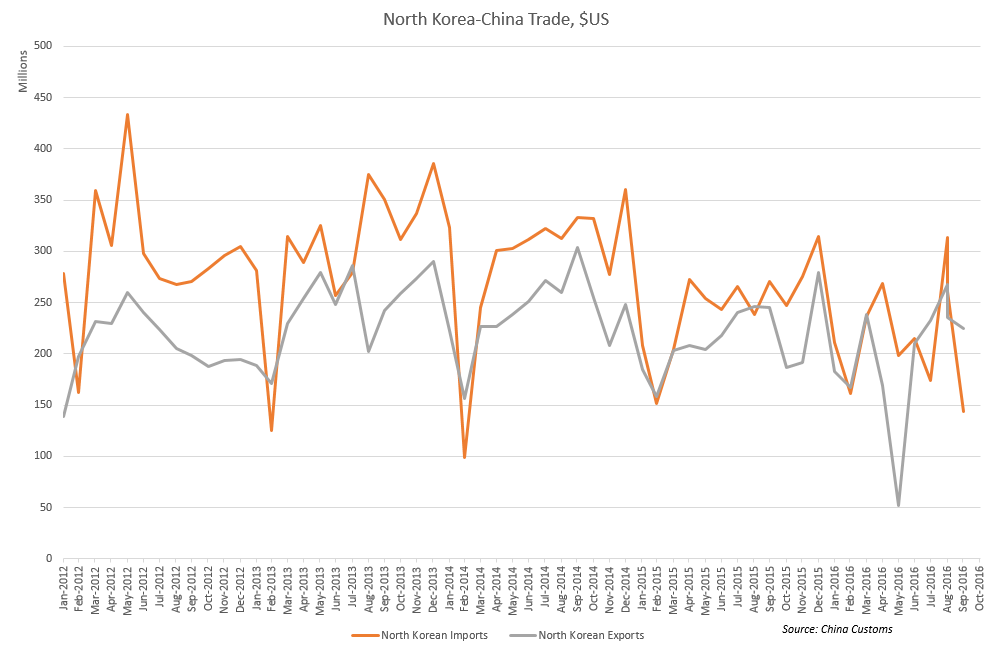 Regarding coal, for the time being imports are explicitly banned in UNSCR 2270 except for “livelihood purposes.” As can be seen from China Customs data in the chart below, China continues to import North Korean coal, which in effect means it is de facto applying the “livelihood purposes” exemption clause. There are two possibilities for China’s treatment of North Korean coal: 1) After the passage of 2270 in March, China planned to ban coal imports but then, upset over the US-ROK decision to install a THAAD battery in South Korea, changed its mind. 2) China intended to interpret the livelihood exemption very broadly from the beginning, which begs the question, why put the ban in 2270 to begin with? What wouldn’t count as a livelihood exemption?

Does the data really tell us what is going on across the border? Yes and no. Despite the evidence of continuing Chinese support, there have also been recurrent stories that trade is facing constraints, particularly as North Korean importers seek to lengthen payment terms and secure credit. Anna Fifield reported a few weeks ago that the business environment in the Dandong region has recently become tenser in the wake of North Korea’s fifth nuclear test and the Chinese government crackdown on the Dandong Hongxiang Industrial Development company. However, she concludes—rightly—that China is unlikely to disrupt North Korean trade in any significant way.

Once the final draft of the new UNSCR is released this blog will do in-depth analysis on the text, but several news outlets have already reported that a major component of the new bill will be a ceiling on North Korean coal exports, thus narrowing the livelihood exemption loophole and purportedly denying North Korea $800 million in revenue per year. But if China is upset at North Korea and wants to use coal export restrictions as a punitive measure, why wait to pass a new UNSCR? They already have a sufficient international mandate in 2270 and since they are effectively the only actor trading North Korean coal, concerns over other countries taking advantage of sanctions-busting arbitrage opportunities seem unfounded. North Korea needs China to buy its coal, not the other way around. It looks like China has devised a face-saving “concession” that does little more beyond what they have already agreed. The key issue will be implementation. 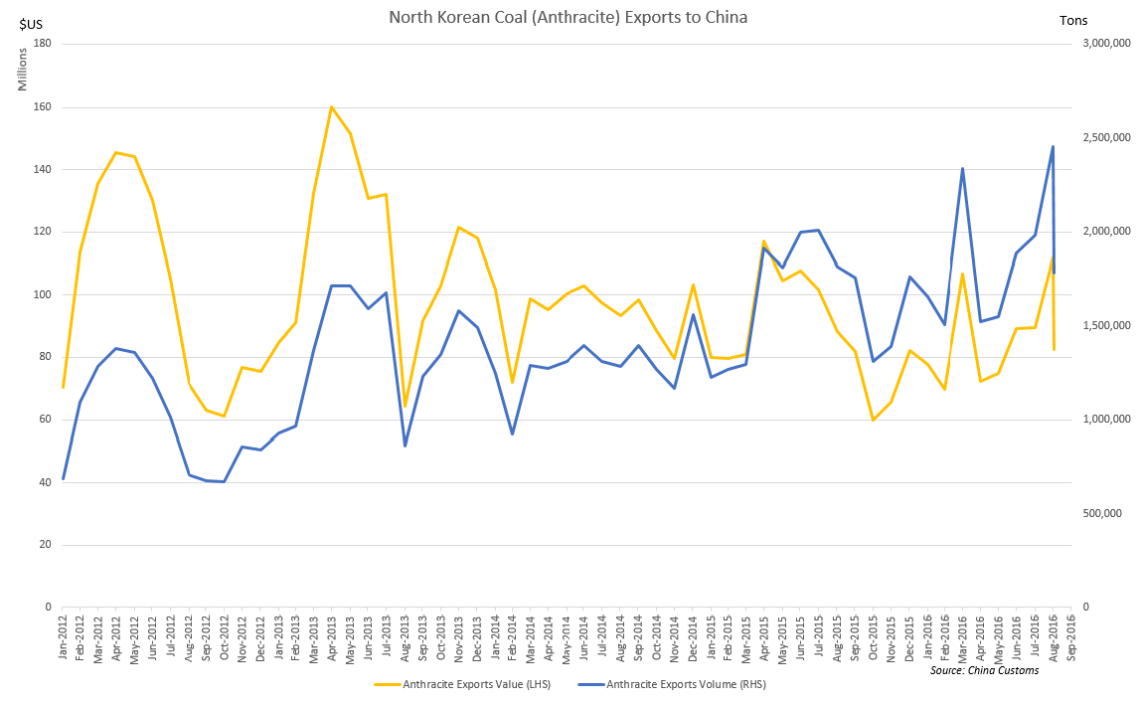 Another metric that we have been continually following to predict whether sanctions are influencing the North Korean economy is the black market North Korean won to US dollar rate as well as the price of rice (once upon a time there was an NK Witness North Korean black market won rate prediction contest). Recent data from Daily NK show no major movements: a very slight depreciation of the won and a decrease in the price of rice, certainly no harbingers of economic distress. 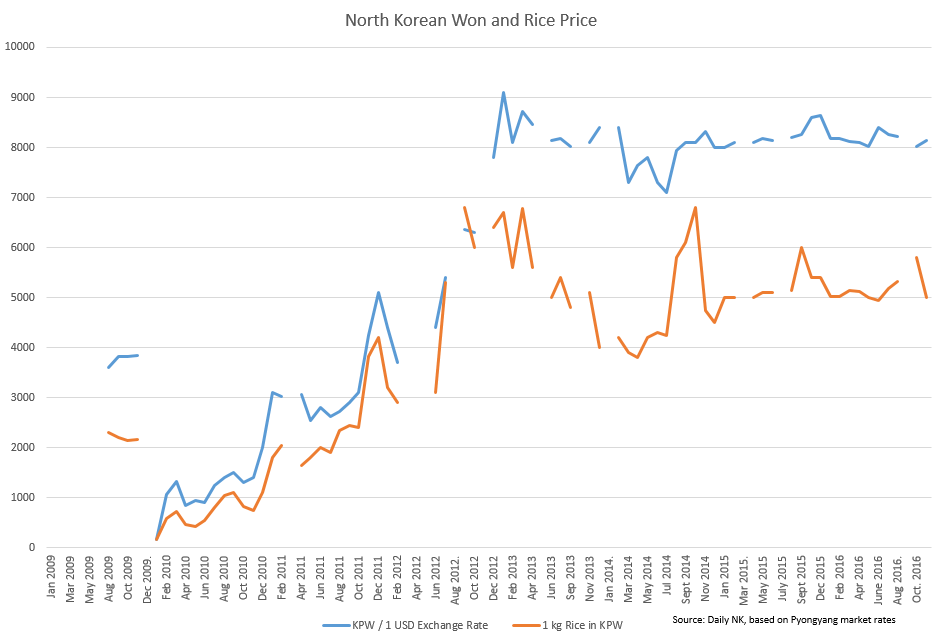 What To Do about North Korea: Will Sanctions Work?