Q: How Bad is the Food Situation in North Korea? 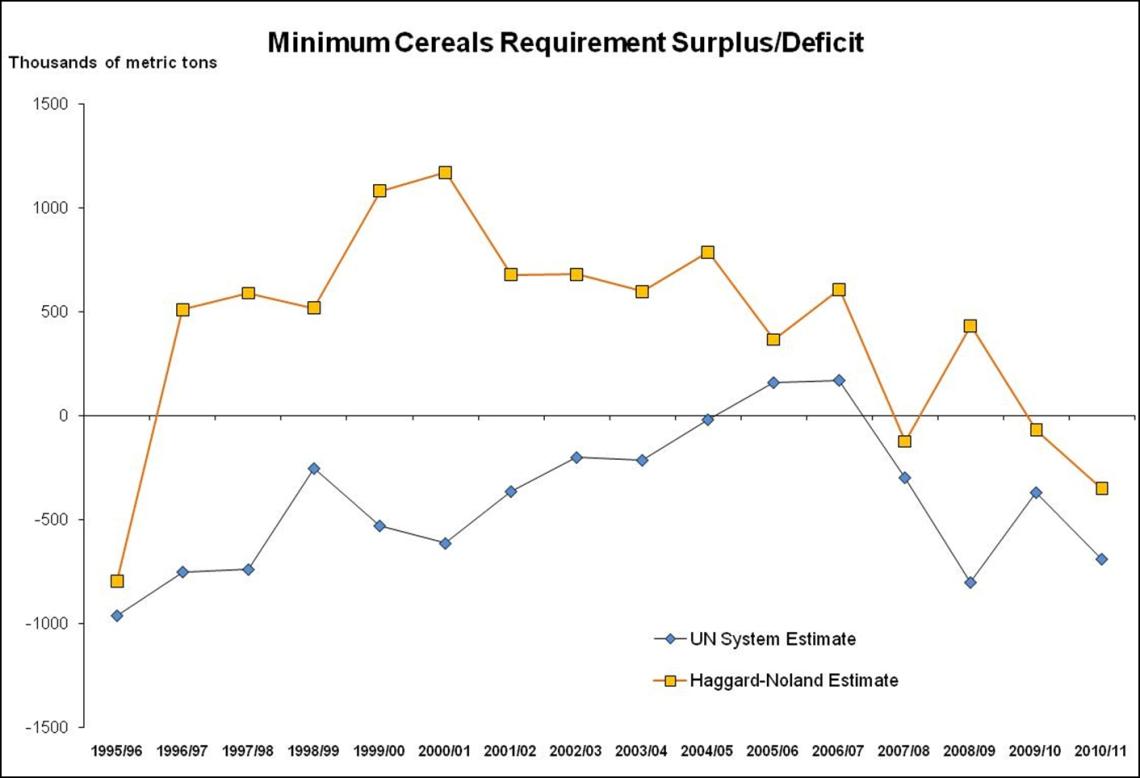 A: Bad, very bad. The figures normally used in public discussions are the grain balance estimates produced by the FAO and WPF.  Steph Haggard and I have long argued that these estimates should be taken with a grain of salt, and probably systematically overestimate North Korean distress. Indeed, as can be seen in the chart above the UN estimate implies that North Korea was below minimum needs 14 of the last 16 years, at times by very large margins.

In response, we have constructed our own alternative estimates. Our estimates differ from those of the UN agencies in a variety of ways, but the two most quantitatively important differences are with respect to domestic production and human consumption needs.  With respect to the former, for understandable diplomatic reasons, the FAO relies heavily on official North Korean estimates of the harvest. There are reasons to believe that the North Koreans tend to exaggerate the size of the harvest in good times (boasting), but in bad times underestimate the harvest to strengthen the case for aid.  In our calculations we use US and South Korean estimates of North Korean production. On the demand-side, the Australian economist Heather Smith has argued persuasively that the FAO-WFP overestimate the role of grains in the North Korean diet and has produced alternative estimates of human consumption which are lower than those used by the UN agencies.  We adopt her adjustment in our calculation.

The result is a series that we believe more accurately tracks what we think we know about food scarcity in North Korea over time.  As shown above, our indicator generates a large deficit at the end of the famine period, which then turns into a modest surplus which is maintained until the 2007-08 harvest year, which was acknowledged at the time as the worst since the famine. On our measure, North Korea recovered the following year, but is now again in deficit, indeed is entering its worst period since the famine.

This quantity-based picture is consistent with the observed rising food prices, the increasing relative price of corn (the less preferred staple) to rice (the preferred grain), as well as anecdotal reports of the North Koreans seeking assistance from both public and private sources.

North Korean behavior has led to aid fatigue and the repetitive reports of large deficits over the years by the UN agencies have arguably inured observers to real distress when it occurs. But make no mistake: there is hunger today in North Korea.  The unknowns are how acute, how widespread, and according to what geographic and socio-economic incidence.