Last weekend, I had an unusual mission on hand: to pay a visit to a Pyongyang restaurant in Northern Virginia, owned and run by a former North Korean undercover agent, Ms. Ma – intriguing in every sense of the word. There is a well-written article on this restaurant and Ms. Ma’s background which you might want to read first, but we had to experience the restaurant first-hand.

Despite having a friend to drive, printed-out directions, and my ability to read Korean, we initially missed the place and had to turn back. It wasn’t one of those fancy, huge Korean restaurants that I had imagined, but a cute little yellow house with a sign that had its previous restaurant’s name written in English and above it, Pyongyang Soondae in Korean. [Thus, I made it a point to take pictures of the restaurant and the sign for potential visitors reading this blog] 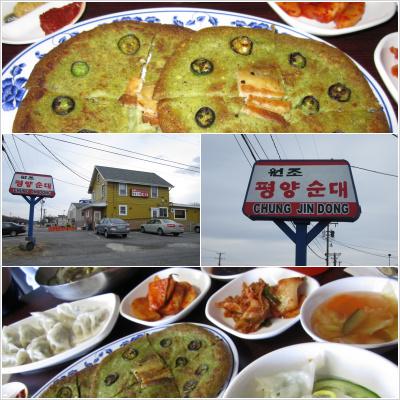 Again, it wasn’t a big, fancy restaurant. There were 5 tables in clear view (there may have been more seating inside) and it had a homely vibe with artificial flowers running across the ceiling. We were greeted by Ms. Ma’s son who served as a waiter, with his North Korean accent still peppered in his Korean. He seemed quite comfortable with customers asking him questions unrelated to food in between taking orders, but customers kept pouring in, all with a tint of excitement and curiosity in their eyes.

North Korean food is rather different from South Korean food. Pepper is still an important ingredient but overall, the food is naturally blander than South Korean food; South Korea is generally much warmer than the North, so traditionally, food had to be seasoned with salt, soy sauce, or pepper pastes to prevent it from going bad. And just as Mr. Paalberg had mentioned, the same dish that would be made with beef or pork in South Korea was made with pheasant or other meat. Naeng myun, a popular cold noodle dish, usually consumed in the summer in South Korea, was made with pheasant broth with tiny pheasant meatballs. Even the dumplings, which are usually made with beef, pork, or just vegetables in South Korea, were made with pheasant meat. According to Ms. Ma, pheasant tastes like chicken, only softer; she was right. Ms. Ma came out of the kitchen to serve the dishes herself, and she explained how the food was made, how it was different from the South Korean version, and how it was to be eaten: in a very proper, delicate manner – a trait I believe is very North Korean. However, she was still your typical ajumma (a term we use to address middle-aged South Korean women) with her aprons on, proudly serving dishes made with care, and engaging in friendly conversations with customers.

Ms. Ma: “This mung bean pancake is slightly different from South Korean ones; you can see that it’s green. That is because we don’t get rid of the skins of the mung beans; all the good nutrition is in the skin, why would you want to throw that away. We grind them here and it’s all natural. You can dip it in this sauce and this sauce…”

So for those of you unfamiliar to Korean food, let alone North Korean food, you should try this nutritious mung bean pancake. Pheasant dumplings were delicious as well (a Caucasian friend agreed) and I’m sure the seafood pancake is similar to the ones in South Korea. If you're the adventurous type, you can try the Pyongyang Soondae (Korean sausage that is said to be similar to European blood sausage but this one has vermicelli, barley, and scallions as its stuffing) which happens to be Ms. Ma’s specialty; evidently they started their restaurant in LA with just this one item on the menu. 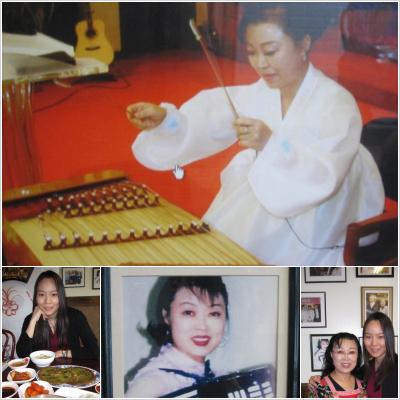