Poetic Justice: the Fight Over Baekdu

As all North Korea watchers know, “Mt. Baekdu is the ancestral mountain and the sacred mountain of the revolution, imbued with the soul of our nation and place where [the] revolution took root.” Kim Il Sung founded his anti-Japanese army on Baekdu. Kim Jong Suk—“an indomitable anti-Japanese woman hero”—carried out her important military activities there. Kim Jong Il was born there in a nativity story that is absolutely Christ-like (in fact, he was born in the Soviet Union). (Some great iconography of the Three Generals of Baekdu here, with our favorite below).

An interesting piece in The Diplomat points out that Baekdu could become the newest entry into China’s string of territorial disputes. Following the end of the Pacific War, the border between China and North Korea around Baekdu was never completely settled. The two countries agreed only on a loose demarcation around Baekdu in 1962 or 1963, but with shared administration over the mountain and the lake surrounding it. However, China has the resources to develop its half and has built extensive tourist facilities that could be interpreted as a land grab. Sound familiar?  In 2008, Beijing applied for the region to be considered a UN Educational, Scientific, and Cultural Organization (UNESCO) World Heritage Site. Four years later, reports surfaced that it had been considered by China as a possible Winter Olympics entry for 2018.

We can imagine what the North Koreans think, but the South is incensed as well since the ROK Constitution sees the entire peninsula as sovereign territory. The area has deeper historical resonance for Koreans in both North and South because of archaeological evidence of the early Gojoseon kingdom; as a result, it has been implicated in the history wars between South Korea and China (for the Korean version, see short clip on Youtube, and the expansive maps in particular).  The Baekdu-Daegan trail is the Korean equivalent of the Continental Divide, with near-mythic resonance for South Korean nature lovers. At the 2007 Olympics, a group of South Korean athletes unfurled a banner asserting sovereignty.

One last bit of irony. Over the summer, Baekdu became the site of a fracas between Chinese security forces and tourists. Visitors were barred from ascending the mountain while Beijing Party Committee Secretary Liu Qi toured the area with a massive entourage and security detail. Stranded tourists blocked the road down the mountain, demanding an apology and a refund. Reaction was so heated, censors had to block references to the event. As we said, poetic justice. 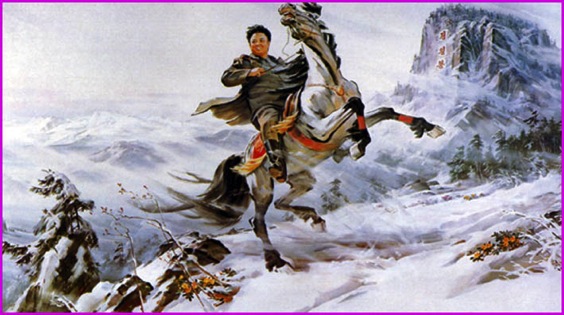