In an earlier post on the ongoing IT transformation in North Korea, we noted a recent story from North Korea Tech reporting Koryolink’s latest cell phone subscription figures at 2.4 million. But what does North Korea’s rate of cell phone penetration look like in comparison to the rest of the world? Fortunately, thanks to the World Bank’s World Development indicators, which keeps a comprehensive dataset on cell phone subscriptions per capita for over 200 countries, we can provide some response to this question.

The first panel in the interactive graph at the bottom of this post depicts average cell phone subscription growth (per 100 people) aggregated by country income groupings. Diffusion begins in high income countries and then migrates to lower-income groups, but with similar S-Shaped logistic growth functions. For the poorest group of countries, rapid growth is still in full swing, increasing from 5 per 100 people in 2005 to 61 per 100 people in 2013. North Korea is clearly an extreme outlier: the only country that is currently less connected in the world is Eritrea. Indeed, any country currently in the same vicinity is marked by high levels of political and social repression as scored by Freedom House’s Freedom in the World Index (you can find methodological details here). 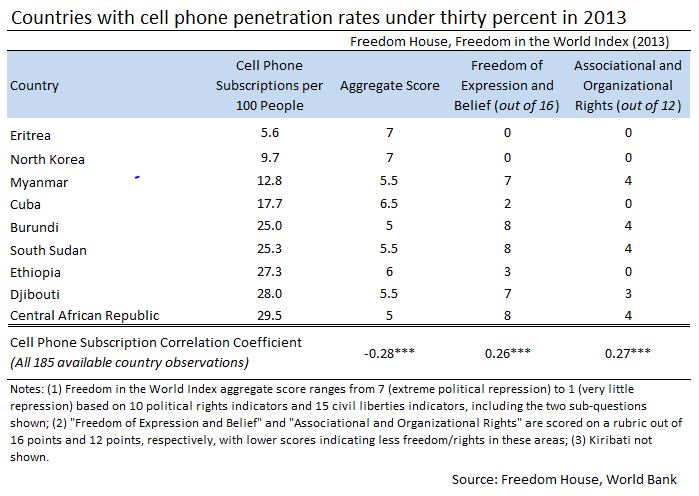 The relationship between interconnectedness and societal freedoms in the lagging countries is not surprising, but it is also a bit misleading. One can certainly give alternate counter-examples of highly connected countries (Saudi Arabia, Turkmenistan, China) that score extremely low on these Freedom House measures. The overall correlations between Freedom House measures and cell phone proliferation are between an absolute 0.25 and 0.34, statistically significant but not overwhelmingly high.

2013 is just a snapshot, with North Korea coming from a zero-base only a handful of years ago. In the second pane, we place North Korea squarely in the context of “Late Adopters” – that is all of the countries (excluding those with populations under 5 million) that still had mobile penetration rates of less than one percent as of 2002. For each country, year 0 represents the last year in which cell phone subscriptions were under the one percent threshold (for our purposes, termed the “introduction” year). Placed in this context, North Korea’s rate of adoption sits closer to the middle of the pack at T=5 (ie. 2013). However, the real test lies in the years to come. Many of these countries (Bangladesh, Nepal, Afghanistan, Chad) hit inflection points roughly four to five years after cell phone introduction, doubling or tripling in the span of a few years. However, some, like Cuba, limp along at tepid linear growth rates throughout.

Of course, country comparisons can only go so far, and it is important to note that cell phone subscriptions per capita could be significantly overstating (or, conversely, understating) the actual number of unique cell phone users in many of these countries. But there are still a few general takeaways. First, North Korea’s cell phone growth actually looks like it is on a relatively normal track when compared to the smaller, poorer late adopters – many who severely curtail personal freedoms, but a few who are relatively free. Second, as the first panel shows, poverty is no longer a significant barrier to rapid diffusion. Not only did handsets become cheaper and ubiquitous throughout the world during the 2000’s, but the advent of prepaid payment systems made cell phone ownership much more feasible in emerging markets. ( This is the system used in North Korea ). Finally, the logistic growth evidenced in many countries would imply that North Korea too could hit an inflection point (and, by the look of things, this would happen soon). Given reports that signal coverage is now widespread and cell phone acquisition is less daunting, North Korea could very well go down this path.

But the key issue is whether the regime will let the inflection occur, permitting a large share of the population to be linked. It has certainly happened within the environment of other highly repressive states (though one could argue North Korea needs an “8” on the Freedom House scale), so it should not be written off completely. It will be interesting to see if Koryolink’s subscription growth rate continues to fall precisely when one would expect it to gain steam. It is perhaps a sign the state has gone as far as it is willing to go in the great cell phone experiment.