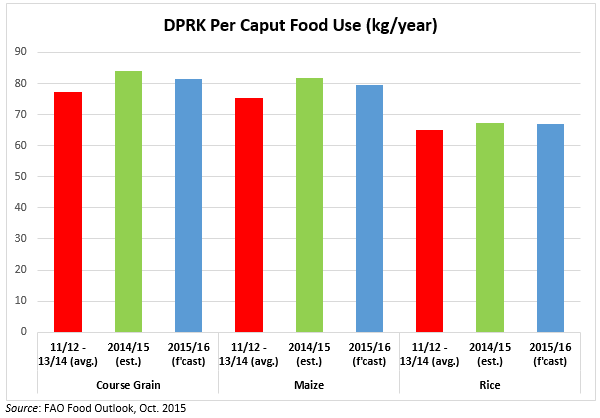 Last week Yonhap ran a story titled “N.K. may suffer severe food shortage next year: S. Korean expert” in which Kwon Tae-jin, formerly of the Korea Rural Economics Institute and now at the GS&J Institute, argued that North Korea may be facing its greatest food shortage of the Kim Jong Un era. Numerous articles, citing reports from the UN system, have highlighted high rates of malnutrition, particularly among vulnerable groups such as children.

The problem is that while the situation appears to be deteriorating relative to last year, as shown in the chart above, the FAO forecast of actual food availability per capita for 2015-16 actually represents a slight improvement over conditions for most of this decade.

Detailed data from the FAO displayed in the table below confirm that while production is forecasted to decline for coarse grains, maize, and rice, only in the case of rice is output forecasted to be below the 2011-13 average, and in this case, increased imports are expected to offset most of the shortfall.

So what explains the conundrum?

One possibility is that the FAO just has it wrong. My recollection is that the North Koreans have not allowed the agency to make direct inspections for a couple of years, so the FAO figures may be guesstimates. And there is a tendency when making guesses to stick close to the baseline. So the deterioration may be worse than what the FAO numbers depict. Kwon Tae-jin knows more about North Korean agriculture than I do and maybe he has access to a different set of estimates that would paint a different picture. Unfortunately, the USDA, which used to do good work on estimating North Korean grain production, seems to have mostly or entirely exited that business.

Or, as a corollary, maybe the issue is not production but falling imports. As I have argued elsewhere North Korea is probably getting squeezed by both declining volumes and declining prices for its mineral exports. But the grain shortfalls are sufficiently small that it would seem that the government could adequately increase imports by expenditure switching if it wanted to avoid a catastrophe.

Another possibility is that the figures are correct, but they are national averages and distribution has become so skewed that real distress is emerging.

Finally, it could be that worsening food insecurity is politically convenient for the South Korean government. Engagement with North Korea is politically attractive in the South, but President Park can’t seem to gain any traction. Reading between the lines of groups such as the Presidential Commission on Unification Policy, the policy line that seems to be emerging is one of humanitarian and commercial engagement as a precursor to political integration down the road. Large humanitarian needs could justify large humanitarian interventions.

Bottom line: we’re back to the new normal. Last year appears to be the anomaly, not this year. Make no mistake, the new normal is a pretty nasty circumstance for some non-trivial share of the North Korean people, but if one is going to argue that 2015-16 looks distinctively bad, then one has to explain how it differs from 2011-13.

It could also be that the FAO and others put too much weight on official government statistics or projections.

I once asked a WFP spokesman via email if the distribution of food via the markets could help alleviate any potential food shortages. They said:
"WFP doesn’t have much information about the functioning of markets in DPRK. But given low household incomes in DPRK, relatively few people would be able to buy food in them".
I thought that was a bit eyebrow-raising. When so many people are relying on the markets to meet their needs, how can one claim not to know anything about them, let alone say people don't have enough money to shop in them.

James, Your comment raises many issues but I feel I should respond to one point. The WFP aren't stupid: I know for a fact that the FAO-WFP has been trying to visit markets for more than a decade, but, to my knowledge, the North Koreans have always forbidden this. I seem to recall one occasion when there was a screw-up and a few people were able to visit a market, but if they don't know what is going on, or the level of current prices, or are unable to do proper household surveys, it is the government of the DPRK that bears final responsibility. Its not for lack of trying.

I appreciate that, and wouldn't for a second suggest the WFP is "stupid", I am simply pointing out that a lot of the analysis (and conclusions) produced by the WFP and others seems to rely quite heavily on official data, or the idea (pipe dream?) that the PDS is still what people turn to for food.
There is other data and analysis out there - you and Steph have for years produced excellent studies based on Daily NK market price data - so, again, it's "eyrebrow-raising" that UN agencies don't appear to do as you have done and make full use of other sources of information.
My point wasn't that they are not clever enough to realise the obvious, or have not tried to find out. It's simply eyebrow-raising that they would claim not to know about it, or include any of that narrative in their official assessments of food security in North Korea.

If I recall correctly, WFP staff was able to visit markets for the food- and crop assessment of 2013, leading to one of the most interesting observations in that year's report: the sharp differences between prices across the country.

Correct, the 2013 Crop Survey team was able to visit 3 farmers markets (see p. 5 of the report). The report notes the difference between Farmers' Markets and unofficial markets (which they could not visit), speculating that cereals are traded in the unofficial channels contrary to official policy. The Crop and Food Security Assessment Reports are pretty much constrained to report official policy, but by reading between the lines and attending to other sources one can see a strong and growing role of the informal markets in cereal trade.