I was recently in Myanmar which has embraced a startlingly ambitious program of economic and political reform, precisely the agenda that North Korea has avoided. In the past two years, the government of Myanmar has enacted wide-ranging reforms that should support development of a more robust civil society: press censorship was eased with the abolition of the Press Scrutiny and Registration Division; private journals began to engage in wide-ranging political reporting, with independent dailies allowed to begin publication in April 2013; the right to publicly demonstrate (subject to notification) was initiated; the telecommunications sector was opened to foreign investment, with the expectation that it will have both economic and social-political effects by facilitating communication among private citizens; a human rights commission was established; and labor legislation was enacted, allowing unions, and protecting the employment of workers joining a union or participating in a strike, though activists complain of problems in implementation. As of October 2013, more than five hundred basic labor organizations (unions) have been certified. Hundreds of political prisoners have been released. This opening of the political space has been accompanied by direct political, administrative, and economic reforms as well.

There are obviously significant differences between the two countries, and despite the appeals of politicians from around the world, North Korea is unlikely to look to Myanmar as a model. Nevertheless, there is one dimension in which the contrast is quite revealing.

Over the last couple of decades, economists have become enamored with the impact of institutions and governance on long-run economic performance. The problems, of course, is how to model institutions, how to identify which are the most salient for economic performance, and then how to design and implement appropriate reforms for the particular case in hand. A practical difficulty immediately confronting analysts and policymakers alike is the sheer number of such institutional indicators and their reliance on sometimes overlapping sources of information.

A recent paper by David Givens carefully examines a huge number of these indicators to statistically separate out redundancy and derive the true new information contained in each measure, and then determines dimensions of governance that actually have the biggest impact on growth performance. He finds that measures relating to "market infrastructure" (essentially rule of law and corruption) and "civil liberties" (essentially other dimensions of rule of law plus voice) have the biggest impact on growth, surpassing other influences on growth such as international trade and geography. 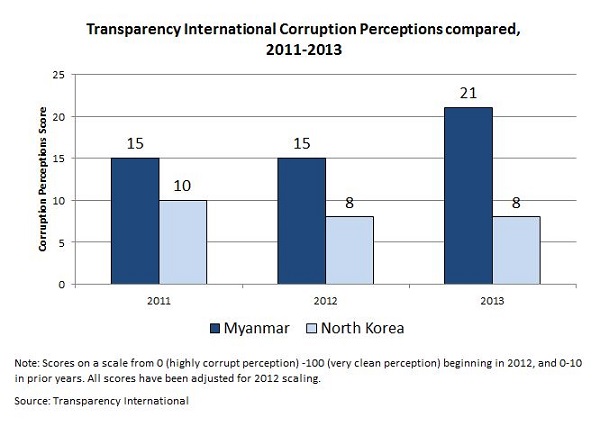 I was reminded of this recently when Transparency International put out its latest corruptions perception report. As the above figure shows, North Korea is still in the cellar as of 2013, along with Afghanistan and Somalia. But it appears that Myanmar's reforms are starting to bear fruit, at least in terms of perception. While North Korea has flat-lined in the three years it has been included in the TI survey, Myanmar has made steady progress. Admittedly, this progress is reversible; what goes up, can come down. But at a minimum, what we can say is that Myanmar is trying to improve its internal practices, and those reforms are beginning to be appreciated. Shame we can't say the same thing about North Korea.