The historic trade policies of the main presidential candidates have generated a wave of work on the policy preferences of the American public, including with respect to Asia; our posts on the election are linked below, most notably the large Peterson Institute study on the effects of the candidates’ trade policies. (Marc Noland also published a blog post yesterday on Mr. Trump’s trade plan on the Peterson Institute’s Trade & Investment Policy Watch blog.) The most recent entry to the discussion: a Harvard-Politico poll called Americans’ Views on Current Trade and Health Policies, based on a telephone (and cellphone) survey of 1,000 randomly selected adults undertaken from August 31 – September 4, 2016.

The first finding—confirming other studies of this sort from Pew and Gallup (linked below)—is the historic shift in the views of trade in the two parties. While only 24% of Democrats say that free trade has an adverse effect on their communities, fully 47% of Republicans say it does. A geographic breakdown may help explain these high numbers: people in the Midwest (53%) are much more likely to say that free trade agreements hurt their communities than are those in any other region (27% Northeast, 27% South, or the 26% West, at least on the coast dominated by blue states).

Views of trade are surprisingly sociotropic, with voters caring about wider social effects on employment and wages. Unfortunately, the report fails to present partisan differences on important questions. But when asked what effects trade policies with other countries have on employment, the answers were even more hostile than those based on assessments of localized effects. 65% claimed that trade destroyed U.S. jobs, 13% that it created them, with 15% saying they had no effect. Nearly half of the sample—49%—thought that these policies lowered wages; only 14% think that these have raised American wages.

But perhaps the most interesting finding of the study concerns how voters view the effects of trade with particular countries; those views are summarized below and several hypotheses are possible. The first is that voters are fully rational and trade with China and Mexico is more labor displacing than trade with the EU and Canada. But the partisan differences make it hard to avoid the conclusion that bashing matters. Countries that have been the focus of Mr. Trump’s ire on trade—China and Mexico—definitely get more attention from voters than Korea and Japan, which have been singled out mostly for free-riding on security issues. 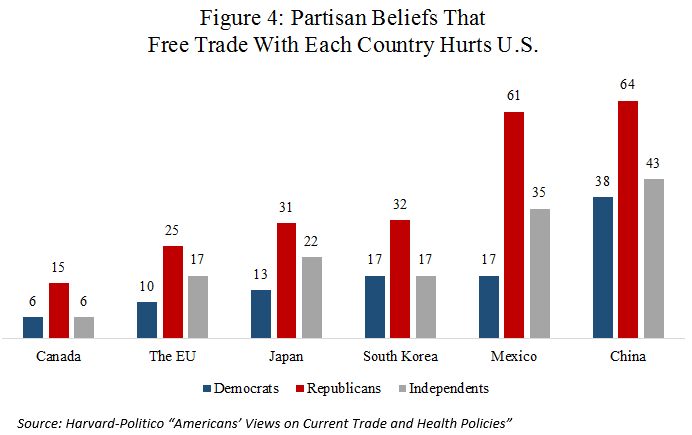 Election Watch: Witness to Transformation posts on the contest for the presidency: