Mapping the Succession II: the Role of the Military

In an earlier post, we reported some findings from Luke Herman’s dataset on the top North Korean leadership since 1996. We focused on three major political institutions--the Politburo, the Secretariat and the National Defense Commission, from which Kim Jong Il nominally ruled the country—and highlighted several interesting developments:

In the figure below, we show the share of military personnel on each of these three bodies at the end of the calendar year. By “military personnel” we mean figures that have been identified in print as officers in the Korean People’s Army. For this reason, we have excluded Jang Song Thaek, who was photographed in uniform but never had his rank identified and did not have an extended military career. Even excluding Jang, the findings surprised us. 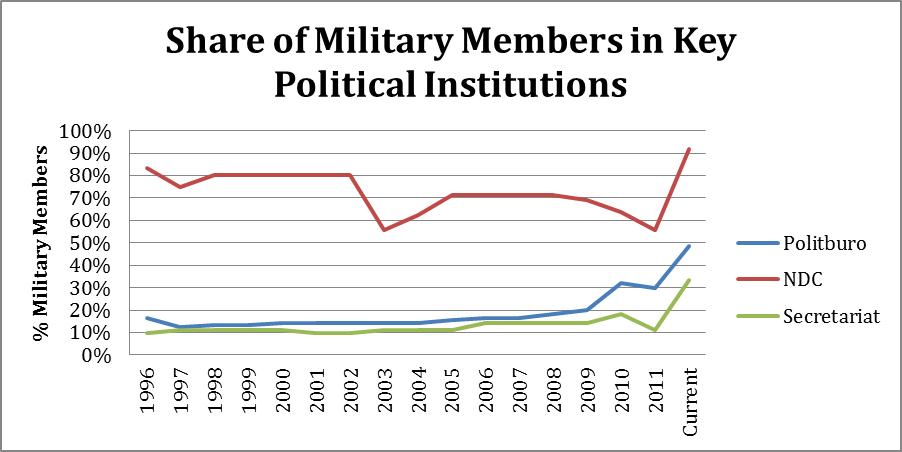 Not surprisingly, the NDC has the highest military participation and the Secretariat the least. But in all three institutions, the military’s share of positions has increased, and in the case of the Politburo quite dramatically. The NDC had diversified its membership following the Supreme People’s Assembly in 2003, but the body is now almost totally dominated by generals. The share of military personnel holding positions on the Secretariat increased from 10 percent to over 30 percent.

But perhaps the biggest surprise is the Politburo, which is now nearly half military personnel. We take a closer look at the composition of the Politburo in the second figure below, using a slightly different measure of military participation than above; we include security officials (who do not hold positions in the KPA) and military-industry personnel (for example, Secretary of Military Industry in 2010, Pak To Chun, counts under this metric.) Using this definition, the trend increase starts earlier but is equally if not more pronounced.

We see that in addition to the military, party officials have become much more prominent on the “transition Politburo” than before (although inability to categorize some personnel in earlier years yields a larger margin of error). Interestingly, economic officials had greater representation in the beginning of Kim Jong Il’s tenure than at any point since. Put differently, there has been a steady decline in the weight of officials with an economic background, a view which comports with our observation that the country continues to experience “reform in reverse.”

The increase in party and military officials is largely accounted for by the decline in state officials on the Politburo. Many of these were SPA officials holding largely ceremonial roles: President of the SPA Presidium, Honorary Vice President, and so on. The high level of state representation in the Politburo during that period migh precisely be an indicator of its irrelevance. 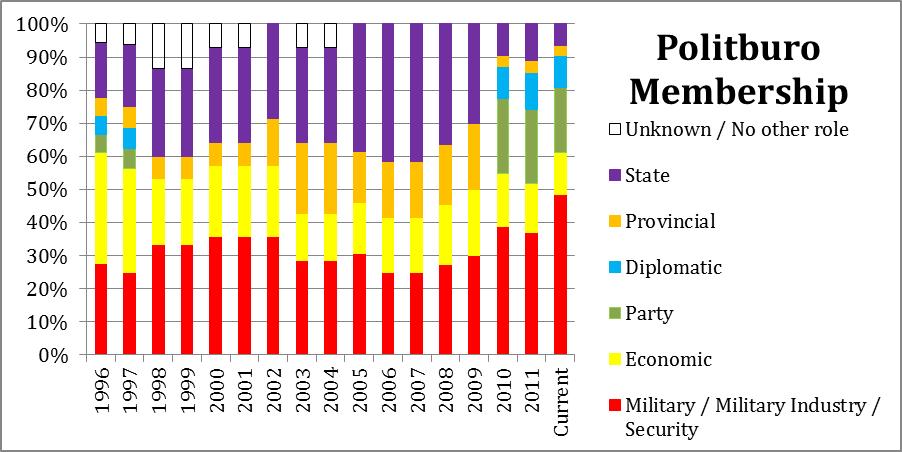 We noted in our earlier post that the average age of these institutions has dropped; the figure below shows the average age of military members on the NDC, Politburo and Secretariat has also trended down for the most part since 2009. 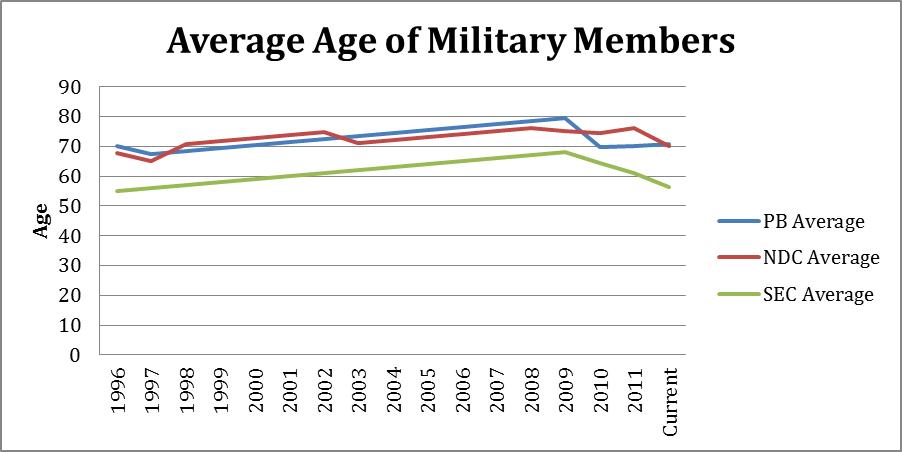 The numbers for the Secretariat prior to the most recent period should be discounted; prior to 2010, Kim Jong Il was the only person with a military position on the Secretariat. And part of the reason for the drop in age in the new era is that Kim Jong Un (or K3 as we will call him) holds military rank and is significantly younger than any other members of the elite. Nonetheless, even with the addition of some older military officials (like Ri Myong Su and Hyon Chol Hae to the Politburo), the military personnel being added are—of virtual necessity--younger.

These data will no doubt revive the difficult question of how to think about the underlying nature of the regime, and the relationship between the party and the military in particular. This certainly is looking more and more like a military regime to us, which should perhaps not be surprising. Just as Kim Jong Il—with weak military credentials—created “military first” politics when his power was formally consolidated around the constitutional revisions in 1998, so we are seeing the K3 similarly promoting military cadre—and apparently younger military cadre—to high positions.

Yet there is still a real question about just how “military” some of these military personnel are. Is the military really getting more power, or is the regime simply dressing up party and family members as military personnel in order to burnish credentials and effectively shore up civilian—or even family--control?

Aidan Foster-Carter made this point in a recent 38 North post. For example, the Director of the KPA General Political Bureau from 1995 to 2010 (when he died) was Jo Myong Rok. Jo Myong Rok was a true military man, who rose through the ranks to Marshal. General (now Vice Marshal) Kim Jong Gak, was the First Vice Director of the KPA General Political Bureau from 2007-2012 and de facto head of the body after Jo's death. However, he was not selected to replace Jo officially. Instead that position went to Choe Ryong Hae, a staunch supporter of the Kim's (son of Choe Hyon, a guerrilla who fought with Kim Il Sung, and former Minister of the People's Armed Forces). Choe Jr. did not have a military background, however. His previous positions included First Secretary of the Kim Il Sung Youth League and Chief Secretary of North Hwanghae Province.  But voila! Just before the September 2010 Party Conference, Choe was elevated to the general ranks.

In the smaller 2010 Politburo there were three “civilian military” members without military backgrounds (Kim Jong Il, Choe Ryong Hae, and Kim Kyong Hui, Kim Jong Il’s sister who was elevated at the 2010 Party Conference). There are now five “civilian military” members. Even controlling for this phenomenon of knighting new generals, however, the number of “military military” personnel has also gone up and is still at the highest point since Kim Jong Il took over in 1996. As during the last familial succession, the evidence suggests increased reliance on the military.