In the Lap of Luxury (Goods)

Ever since the execution of Jang Song Thaek, we have been assessing whether China-North Korea economic relations have been cooling and, if so, to what extent the trend is motivated by political pique between Beijing and Pyongyang. For example, its possible Chinese authorities are putting the squeeze on North Korea through an unofficial “embargo” of crude oil exports, which may be more than symbolic but we doubt was ever in full force. Another avenue to signal China’s displeasure is to get more serious about blocking the exports of goods that fall under UN sanctions; we may have seen some form of this when the commerce ministry released a 236-page list of banned goods mostly relating to “dual-use” technologies in September 2013. But have we seen any commensurate crackdowns on exports of luxury goods to North Korea, which also fall under UN sanctions?

Figure 1. China’s exports of “luxury goods” to North Korea, as defined by Australia and Japanese lists 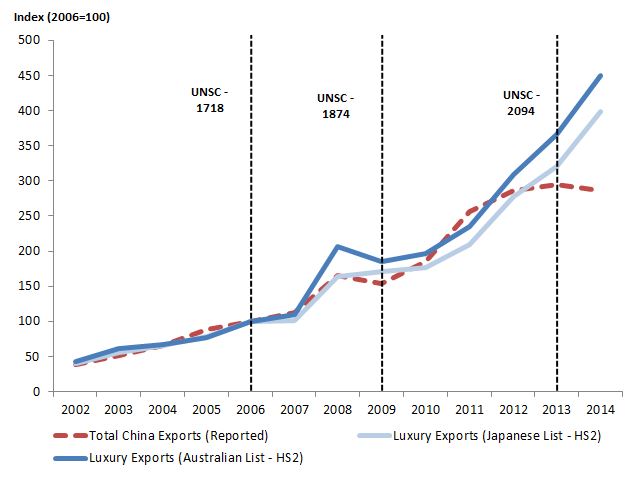 If we go by the luxury goods lists compiled by Australia and Japan after UNSC 1718, we would answer with a resounding “no” (Figure 1). According to our calculations, this wide grouping of “luxury” items – from yachts to rock lobsters – has gone from around $40 million in 2005 to around $196 – $237 million as of 2014, depending on the list. (These are our more conservative estimates - a South Korean lawmaker put the sum at $644 million in 2013.) It is important to note that this does not necessarily mean China is violating Security Council resolutions: the UN only defined jewelry, precious stones and gems, yachts, and luxury automobiles as specific examples of luxury goods in the 2013 resolution. With some general guidance, it leaves the specific definitions up to member states, some of which like Japan and Australia issue detailed and expansive lists. China - like many others countries – does not keep a public list on what they consider to be “luxury goods” and has avoided any mention of luxury goods in reports filed to the UN sanctions committee. If a specific list exists at all, the criteria are clearly far more limited.

Beyond the discussion of what should constitute as sanctioned items, Figure 1’s trends are interesting for a number of reasons. First, sanctions exhibit no visible effect on China’s luxury exports; Marcus noted the non-effect of sanctions in a more statistically sophisticated paper in 2009 and that conclusion is almost certainly still true now. Second, we see that the rise in so-defined “luxury” goods tracked growth in overall exports until 2012, but in the last couple of years it has accelerated while overall trade moderated. It is interesting to note high growth continuing in 2014 with Beijing and Pyongyang publicly at odds, yet another sign that bilateral economic interactions have little to do with the political climate.

The third point is to note what these luxury goods actually are, and what is driving growth. China reports no exports in categories like precious stones (which the UN has specifically identified), but strong export growth in other areas like cigars (+ 43%), wrist watches (+200%), makeup and beauty products (+29%), liquor, and other products that are easy to argue as constituting “luxury”. However, by far the largest category on both the Japanese and Australian list is televisions – mostly of the digital LCD variety. Television exports have more than doubled from 2013 to make up about $75 million, or about a third of all luxury goods. Surely, such gadgets have been concentrated in the hands of the Pyongyang elite and we have no idea how many units exported are fancy name-brand behemoths with huge price tags. But LCD televisions can also be extremely cheap. If we made a not unreasonable assumption that the average unit cost was $300, this amounts to 250,000 units exported in 2014 alone. We have clearly moved beyond the cloistered few. As we showed in previous posts, televisions, portable media players, cell phones and other electronics are becoming ever more ubiquitous for a wider nascent middle class hankering to consume information – much of it not state-sanctioned.

If China truly were serious about signaling pique, especially as officials become more alarmed about the North’s nuclear program developments, it could publicly release a specific luxury goods list of its own and crack down on the more egregious sales of luxury items (like, where did these Mercedes limousines come from?). But this is no longer 2006, when Australia drew up its list sanctioning consumer electronics. Whether or not anybody should consider a modestly-priced television – or any other electronics chiefly designed to transmit and spread information – as a “luxury” good is now a much murkier issue.