Prior to the missile launch, we saw a spate of reporting coming out of the South Korean press hinting that the transition may not be going well. These stories may provide information—or disinformation. And the successful launch may--or may not-- have changed the story line. In any case, the first anniversary of Kim Jong Il’s death struck us as a reasonable time to review Kim Jong Un’s first year and identify what we do and don’t know about the succession process.

It seems clear that Kim Jong Un is seeking to build a new cadre of military, party and state personnel that are loyal to him. It also appears as if internal security has been heightened, with possible implications for the political standing of the security and prosecutorial apparatus. Yet it is also a certainty that those at the losing end of the changes—and they are numerous—are probably not very happy about it. The issue is not simply one of formal positions being lost but the associated rents that went with them. The key question is whether the disaffected have ways to effectively challenge the regime; to date, the answer to that question still seems to be “no.” Redundant, stove-piped commands make it hard for the disaffected to coordinate.

Recent Speculation: Is the Succession Under Stress?

Dong-A Ilbo was the first to report on possible stresses, with a story on December 4th titled “Is NK leader staying in P’yang in fear of his personal safety?” The article drew attention to the fact that Kim Jong Un has not made a public inspection tour outside of Pyongyang since August 28th. Analysts suggested he may be staying in Pyongyang due to “uncertainty over social stability across the Stalinist country.” An alternative—and more plausible—explanation would focus on potential elite challenges: you don’t leave the capital, and the guard command, when things are uncertain.

On December 6th, Chosun Ilbo, citing the proverbial “informed sources”, alleged that Kim has beefed up security and was “extremely nervous about the possibility of an emergency developing inside North Korea.” It also cited a diplomatic source that said Kim was bolstering personal security because of mounting opposition within the military.

That same day, Yonhap reported “senior South Korean officials” to the effect that the North was “carrying out a massive nationwide campaign to weed out ‘impure elements’ among the populace.” The senior official also said that “we can presume that there could be people discontent with the personnel reshuffles.”

More serious analysts such as Ken Gause have also commented on these trends, noting the continued churning at the top of the military, something we have also tracked and detail below. Gause notes a possible rise in the relative standing of the internal security apparatus, including particularly the Ministry of State Security (국가안전보위부Gukga Anjeon Bowibu). In a high-profile visit to its headquarters in late November, Kim Jong Un called on the ministry’s personnel to “decisively frustrate the moves of the imperialists and reactionaries.” The minister, Kim Won Hong, now holds positions in all three of the main political bodies—the Politburo, Central Military Committee, and National Defense Commission—as well as the rank of general.

The evidence of nervousness extends beyond intra-elite politics to concerns about broader social trends. The Mainichi Shimbun purports to have gained access to remarks made by Kim Jong Un following his well-reported attendance at a concert featuring the Morabong troupe in July. Rather than reflecting a change in leadership style, it appears that Kim Jong Un shared our analysis that the medium may be the message and that the message is subversive. “Seeing performances of the Morabong Troupe, it is possible that young people will adopt bad behavior like swaying their hips suggestively and that unwelcome lifestyle trends may soon spread. They must not be tolerated…Seeing the speed with which the Moranbong performers absorb their rhythms, I think it is possible that the speed at which such a trend could spread in society could also be very fast."

It is probably not coincidental that there have been major gatherings of legal and security officials in Pyongyang in the last month and a half.  On November 23rd, there was a meeting of the Ministry of People’s Security branch chiefs in Pyongyang, attended by the head of the MPS Ri Myong Su, director of the Propaganda Department Kim Ki Nam and director of the Korean People’s Internal Security Forces (which is subordinate to the MPS) Ri Pyong Sam. Participants gave an oath to be “matchless and stalwart security personnel devotedly defending the party, social system and people!” (note the order). Kim Jong Un, Choe Ryong Hae and Jang Song Thaek (among others) attended a photo session with these participants a few days later. On November 27th, a national meeting of judges and prosecutors was held in Pyongyang as well; Mike Madden, at the North Korea Leadership Watch blog points out that the officials were told to “heighten revolutionary vigilance and expose and foil moves of enemies, internal and external.” A week later a meeting of judicial officers was held and attended by a number of higher ups in the North Korean elite, including Ri Myong Su. According to Madden, this last meeting brought together the officials who coordinate cases between People’s Security and public prosecutors.

How do these recent developments sit with more general trends? We underline two developments during Kim Jong Un’s first year in power. (Our earlier posts on “mapping the succession” provide more detail and can be found here and here and in our comparison of the Chinese and North Korean Politburos.)

First, there has been major turnover at the top of the military, especially around the time of the Party Conference and SPA meeting in April.

What makes these four purges so fascinating is that they are none other than the four representatives of the military and security apparatuses that were chosen to accompany Kim Jong Il’s casket as it made its way through Pyongyang; they were the military half of what we called The Gang of Eight. Now, one year after Kim Jong Il’s death, three have disappeared and one (Kim Yong Chun) has seen his position in the regime fall considerably.

That Kim Jong Un would want to remake the top of the military order is not surprising. But the second major question is whether something larger is afoot in the relationship between the leadership, the party and the military. In the other posts cited above, we provided some evidence about efforts to rebuild sclerotic party institutions; most notable in this regard was an expansion of the Politburo. Has there now been a subtle turn away from the military toward greater reliance on other power centers?

The chart below is based on all appearances made by Kim Jong Un during his first year in office, dividing his appearances between military and non-military venues. In the first several months of the transition, military units or events were his most frequent destination. These dropped off after the Party Conference, jumped again in the wake of the Ri Yong Ho purge and have in the last three months settled into a pattern that is the mirror image of the first three months, with most visits being non-military in nature. 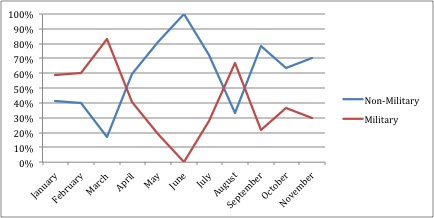 Too much should not be read into this data; we have seen no fundamental ideological departures from the “military first” foundations of the regime. But the relationship between the leadership and the military has clearly been unsettled during Kim Jong Un’s first year in office. The new leadership seems to be looking for ways to assure control over key military positions while build some institutional counterweights to the power military personnel continue to wield in the political system.

One thing to note: Kim Jong Gak appeared at an event yesterday, so he hasn’t been purged per se. It is likely that he lost his position, but is still an alternate member of the Politburo and has gotten some lesser position.