In the last two weeks, my colleague Marc Noland posted a series of three assessments of current drought risk in the North; they are linked below. Here, we pull back a bit and link to two sources that provide a somewhat longer-run view of the humanitarian picture.

First up, Jerome Sauvage visited UC San Diego several months back and gave a useful overview of UN operations, summarized by him here; Sauvage spent three years as resident representative for the UNDP in Pyongyang (November 2009 to January 2013) and thus has a wide perspective and knows whereof he speaks. His first point is that the humanitarian situation should be characterized as fragile but not a full-blown crisis. This assessment is based on developments in the year prior to early 2015 and extensive contact with people on the ground; although the baseline is low, Sauvage emphasizes evidence of modest improvements.

His second point is how modest the UN program in the country is at this point; the figure below from the UN report makes the point. Even as appeals have drifted down since 2011, the shortfalls as a share of total appeal has widened in the last few years. Sauvage is intent to note that the modest operations can hardly be accused of propping up the regime and he provides a useful overview of the range of activities underway. But what comes through most strongly is that this the UN presence is just about the only significant aid presence left at this point, the ongoing efforts of a handful of NGOs notwithstanding. Finally, he highlights the ongoing tussle between North Korea and the UN’s efforts to maintain international humanitarian norms, one of the reasons why the presence is so modest. 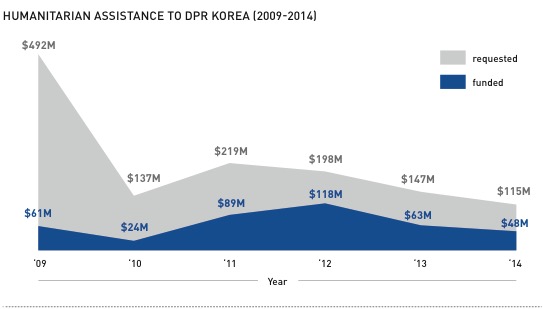 In April, the UN released its annual Needs and Priorities report, and the mood is even more downbeat; it provides a useful overview of the official UN view. The report puts numbers on Sauvage’s idea of fragility; as much as 70 percent of the population as food insecure, with higher numbers if we look at measures such as dietary diversity. Seven million people—just under a third of the population—are without adequate access to clean water and adequate sanitation. The report also highlights a set of health deficits, ranging from vaccination shortfalls to the 2500 people a years still dying of TB. The usual UN-speak pertains; under a section called “why the humanitarian community is still needed in DPR Korea” the report lists “weak national capacities,” “natural hazard risk” and “vulnerability to shocks.” Is this really as far as the UN can go when abject neglect is so clearly in play?

Among the more interesting graphics are a comparison of the path of average Public Distribution System rations for 2013 and 2014; both fall below a government minimum-human-needs line and 2014 is worse in the immediate pre-harvest period than in 2013. 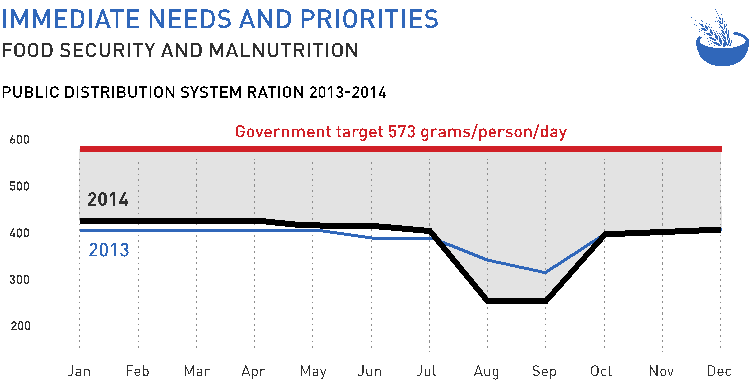 The second figure of interest was one showing an explosion of the uncovered cereal deficit even prior to the deepening of the drought. The report notes the modest improvement in total output but the fact that it fell short of targets.  Again, the effects of the drought will depend not only the weather but government intentions and capacity with respect to commercial imports. The current WFP is down to 1.8 million beneficiaries, overwhelmingly children and pregnant and lactating women with some support to farmers experiencing distress.

The UN is seeking $111 million for 2015, nearly $90 million of that for food. It also notes in a short section that the Foreign Trade Bank sanctions have interfered with humanitarian operations, which was not their intent and needs to be addressed. But the larger picture is a feeling of aid fatigue. The request is again a marginal decline from last year. But if current funding levels are any indication—now at only 17% of the total—the willingness to help will show a continuing decline. 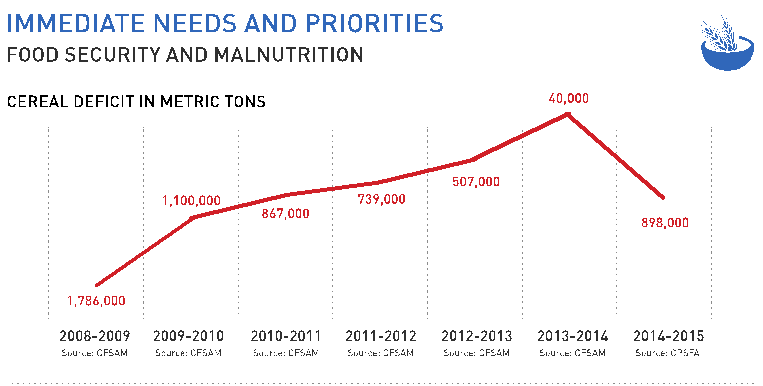 Marcus Noland on the Drought