HRNK and DigitalGlobe Report on North Korea’s Camp No. 25 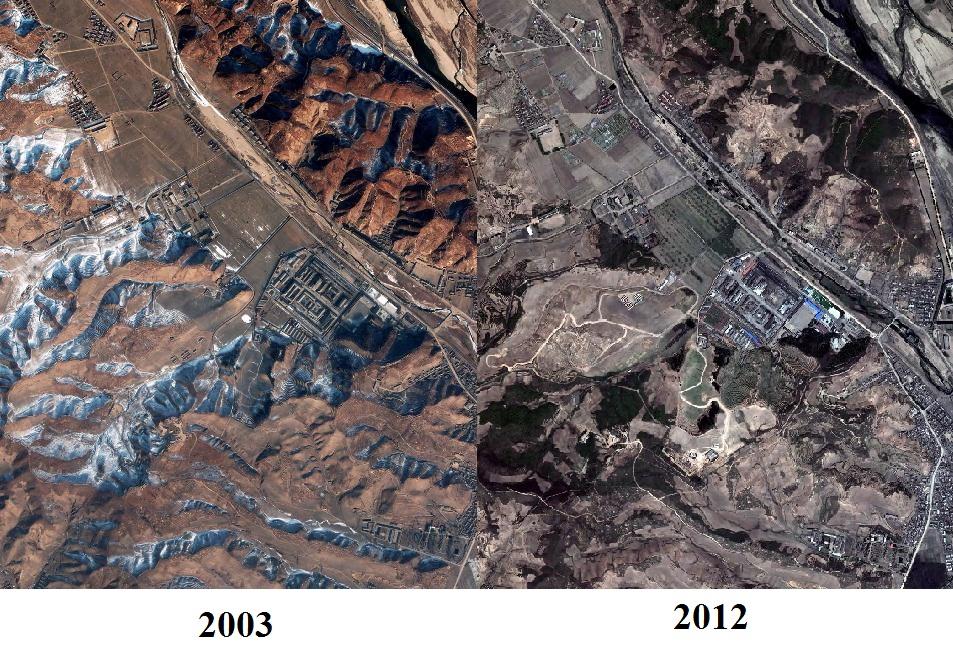 The Committee for Human Rights in North Korea along with Digital Globe, a commercial organization that provides high resolution imagery and geospatial analysis products, have collaborated to produce a new report on North Korea's political prison camp number 25.  Using high resolution satellite imagery from Digital Globe, HRNK and Digital Globe analysts were able to track and analyze the developments of the camp between 2003 and 2013.  A key finding of the report is that camp no. 25 has not only continued to operate, but has expanded significantly, particularly in 2009 and 2010.  The image above, adapted from the report, shows the expansion of the camp and its surrounding areas.

For detailed analysis, download the report from HRNK here and read the press release below.

HRNK and DigitalGlobe Launch Report based on Satellite Imagery of North Korea’s Political Prison Camp No. 25

The Committee for Human Rights in North Korea (HRNK), a non-governmental organization based in Washington, D.C., in collaboration with DigitalGlobe (NYSE: DGI), a leading global provider of commercial high-resolution earth imagery products and advanced geospatial solutions, have launched a report entitled North Korea’s Camp No. 25. Political Prison Camp No. 25 (a.k.a. Kwan-li-so No. 25) is located in Susong-dong, Chongjin-si, North Hamgyong Province, on the northeast coast of North Korea. While open-source information on the camp continues to be scarce, the Camp 25 political prisoner population is estimated to be around 5,000.

The report is the third product in a collaborative endeavor by HRNK and DigitalGlobe to create a clear picture of the evolution and current state of North Korea’s political prison camps. The previous two reports examined Camp No. 22, situated in Hoeryong, North Hamgyong Province.

Under the arrangement, DigitalGlobe provides comprehensive analysis of new imagery that it acquires for this project, as well as analysis of older imagery saved in its archives. HRNK combines its own findings and those of DigitalGlobe in the final published reports. HRNK for its part is known for having put North Korea’s penal labor colonies on the map by publishing Hidden Gulag by David Hawk in 2003 and Hidden Gulag Second Edition in 2012.

The research and imagery analysis confirmed that agricultural development, maintenance and construction activities have continued at Camp 25. Between 2009 and 2010, the camp perimeter increased from approximately 3,710 meters to about 5,100 meters, a 37 percent expansion. During the same period, the camp size increased from approximately 580 square meters to about 1,000 square meters, a 72 percent increase. While many of the original 20 guard posts detected in 2003 remain standing and operational until the present day, two were added in 2007, four in 2009, and 17 in 2010. In 2010, a new main gate was erected, and two previously separate agriculture fields in the northwest area of the camp were combined and the road between them blocked off, thus enhancing access control and ensuring that ordinary citizens have little or no opportunity to interact with the prison population or use the road adjacent to the camp.

The reasons for the expansion could include: 1. An intensified crackdown on attempted defections, and higher than previously internment of defectors forcibly repatriated from China. 2. The purge begun in early 2009 in conjunction with North Korea’s second hereditary transmission of power, resulting in the imprisonment of those displaced from power, their families and their bureaucratic support groups. 3. The consolidation of North Korea’s political prison camp system, possibly involving the downsizing of some detention facilities such as Camp 22, and the expansion of others, including Camp 25.

“It appears that North Korea’s vast system of unlawful imprisonment may be undergoing an alteration involving the consolidation of some of its political prison camps, and the expansion of others”, said Greg Scarlatoiu, Executive Director of the Committee. Scarlatoiu added, “If a dismantling of some of North Korea’s political prisoner camps and prisoner transfers to expanded facilities are in progress, it is essential to ensure that the North Korean regime does not attempt to erase evidence of atrocities committed at the camps, including the surviving prisoners. HRNK and DigitalGlobe will continue to closely monitor developments at Camp 25 and throughout North Korea’s political prison camp system.”

HRNK’s 2012 report Hidden Gulag Second Edition contains information about North Korea’s political prison camp system, where between 150,000 and 200,000 political prisoners, often three generations of the same family, are being held. It concludes with a “a blue-print” for disabling and dismantling the prison labor camp system. It recommends immediate access to the prison camps by the International Committee of the Red Cross (ICRC) and the World Food Program. It recommends the creation of an international commission of inquiry to investigate North Korea’s breaches of international human rights law and international criminal law, concluding that massive crimes against humanity are being perpetrated in North Korea. It calls on China to allow access by the UN High Commissioner for Refugees (UNHCR) to all North Koreans seeking refuge in China, and calls on the United States, the Republic of Korea and Japan to integrate human rights concerns into any future normalization of political and economic relations with North Korea.

HRNK, established in 2001 by a distinguished group of foreign policy and human rights specialists, seeks to draw attention to human rights conditions in North Korea by publishing well-documented reports and papers, convening conferences, testifying at national and international fora, and seeking creative ways to end the isolation of the North Korean people.

The report North Korea’s Camp No. 25 is available on HRNK’s website: www.hrnk.org