We have been scratching our heads about the North Korean food situation amidst a welter of conflicting evidence. The debate on the North Korean economy has shifted subtly to a focus on de facto reform and growth, perhaps even in the countryside. And the “100 year drought” proved an exaggeration. On the other hand, assessments keep dribbling out of the country that both the summer and fall harvests are disappointing, raising the question of whether and how the regime plans to meet the uncovered food deficit. Damage from the August and September flooding appears localized. But full assessments are ongoing and a concern is loss of stocks and adverse effects on the harvest as well as the more immediate humanitarian concerns of the displaced. Moreover, the international safety net is severely stressed by needs elsewhere. The following updates an earlier post with a similar message; if not catastrophic, the food situation may be trending back to the North Korean normal of low-level shortages.

The latest bit of information comes from a September 9 report from the UN Food and Agriculture Organization’s (FAO) Global Information and Early Warning System (GIEWS). Although North Korean claims about the drought proved hyperbole, they were not without foundation: the FAO is still predicting a 12% decline in rice output for the main fall harvest starting shortly and continuing through mid-October. But what is new in the report is not projections but actual outcomes of the early harvest crops: potatoes down 20% and spring wheat and barley off 32%.

This has been accompanied by one of the sharpest fall-offs in Public Distribution System (PDS) rations in years (Figure 1 below) and the FAO is saying food delivery is dangerously low. This signal is unambiguously bad, but the question is how significant is it? The PDS ceased to be a primary source of food for most of the population two decades ago, so our focus on it partly reflects the understandable tendency to gravitate toward whatever sources of information are available. But in the worst case, this could be like the drunk looking for his lost car keys under the lamppost because that it where the light is. What matters are how targeted PDS deliveries are on marginal groups: if the PDS is really serving the proverbial widows and orphans, then its decline could signal real distress; if it is largely a benefit for politically connected groups that have cash income to spend in the market, then its decline is less concerning. We, at least, are not confident where to draw that line in 2015. 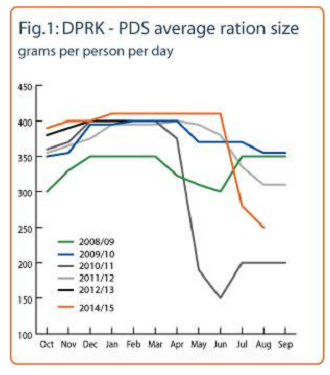 The decline of the PDS is not the only evidence on offer. North Korea approached the FAO about additional assistance in July and did so again two weeks ago. The FAO is looking to fund efforts on the input side, but the appeal naturally raises the question of what the World Food Program (WFP) will be called on to do.

The WFP’s history with North Korea has mirrored its global operations, on which more in a moment. The WFP initiated a DPRK program in July 2013 that was to run through the end of June 2015 (project 200532). The budget was cut because of funding shortfalls. It was then augmented by about $30 million (about 170,000 additional MT of food) in late 2014 to run through all of 2015, partly as a result of an interim assessment showing ongoing food shortfalls. The extension would continue to target 1.8 million children and women in 87 counties for the second half of 2015. A review of funding was scheduled for September 2015 and the periodic review of the overall resource situation was released last week and is reproduced below. The review shows that the entire program—$167 million over 2 ½ years—was only half funded (51.2% to be exact). But this is somewhat misleading as internal multilateral sources (“multilateral,” “stock transfer,” “CERF” and other sources of income) accounted for a substantial share of the total package. 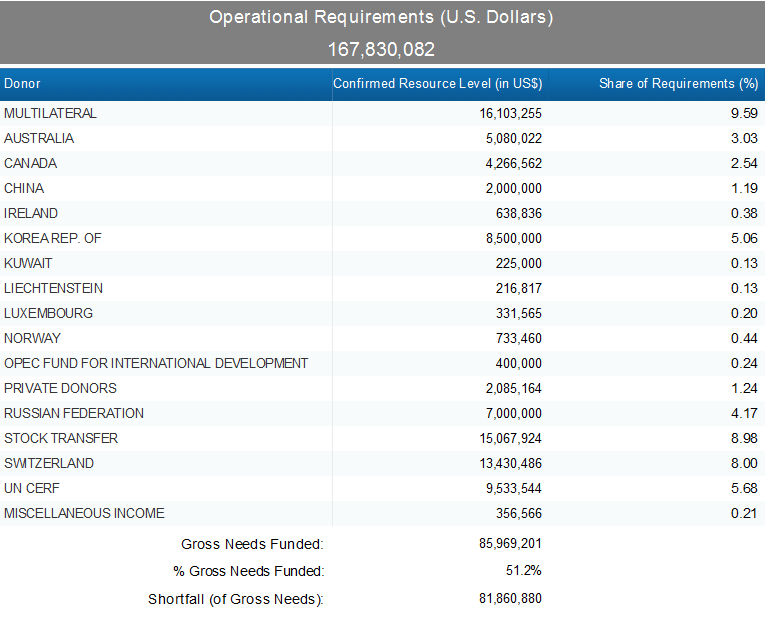 In sum, donor fatigue is in evidence and is likely to get worse. An underappreciated dimension of the European refugee crisis is the underfunding of the humanitarian effort in Syria itself and the failure to develop a more aggressive strategy of humanitarian intervention. Steven Erlanger and Kimiko De Freytas Kamura provide a good introduction to the issues at the New York Times. According to them, The United Nations Syria Regional Refugee and Resilience Plan had received only about 35 percent of its $4.5 billion appeal for the year. The World Food Program is about similarly underfunded globally and has had to halve rations going to refugee camps in the region. In such a setting, will North Korea—perfectly capable of handling its food situation—be a priority?

The GIEWS assessment sees an uncovered food deficit of 421,000 MT with plans to import about 300,000 MT. The good news is that food prices continue to moderate sharply from their 2011 peak. Moreover, the Russian and Chinese connections are still there, although good work by Leo Byrne at NKNews shows food imports slowing compared to last year.

Again, as in the issue of the PDS, it is hard to know exactly how to interpret the decline in food imports. In a centrally planned system, such a decline would be interpreted as reflecting the preferences of the central authorities (who could then rightly be held accountable for the resultant outcomes). However, in a market economy the composition of imports reflects the distribution of income and the consumption preferences of various groups. It is theoretically possible that income is concentrated in groups that don’t have a particularly great need for imported grains but might rather spend their money on consumer electronics, so that the decline in food imports might paradoxically reflect how well some groups in society are doing. But, this could also signal serious deprivation among other groups which simply don’t have the income to demand imported grain. And, it should be noted, imports are down overall, but from a peak that had finally exceeded the previous peak of the 1990.

The issue for North Korea in 2015 is how much control over the economy does the state have and how much of these developments reflect conscious policy choices, as distinct from the simple playing out of market forces. Albeit, this must be viewed against the backdrop of a system in which the state has enormous influence over how the economy operates and how the fruits of economic activity are shared.

Kim Jong Un has had the benefit of adequate harvests and falling world prices since he came to office. If de facto reforms are taking hold, they might also have effects over the long-run and households have learned to cope. Having written on the famine, we are particularly cautious about crying wolf and there is no evidence that we are in a pre-famine state. But we could well be back to a North Korean “new normal”: chronic, low-level shortages and unequal distribution generating nutritional deficits among the vulnerable, even as Pyongyang thrives.