Remember the food crisis in North Korea? Earlier in the summer, we made a number of points:

So, is there any new information that would lead us to believe that the situation has improved, besides the fact that the press as well as governments have fallen silent on the issue?

The short answer is “no.” There is some debate about the extent of the damage of the summer floods. The FAO didn’t help its own cause very much when Hiroyuki Konuma, the FAO's regional representative in Asia, managed to generate at least one headline that the flood damage was “not significant.”

But this seems to be a minority opinion. Bloomberg/Business Week has a longer feature that more accurately reflects thinking within the WFP, which has also posted some distressing new video material on its site. The WFP program—which we have posted on extensively (here and here in particular)—remains less than 30 percent funded (a list of needs and donors to date is attached below). The main message Konuma delivered in his press conference was that even if the crop improves marginally, current shortages remain acute and may even worsen due to rising food prices and the focus of the donor community on the horn of Africa.

North Korea today (in issues 415 and 416 from August) highlighted the floods and the fact that the regime appealed for outside assistance with alacrity, typically an indicator of concern.

Moreover, we now also have an executive summary on the visit of a consortium of USNGOs to report on the delivery of flood relief; the summary is reproduced in full below and we urge the consortium to make the whole report available quickly.

The group included representatives of Christian Friends of Korea, Global Resource Services, Mercy Corps, World Vision and Samaritan’s Purse and visited post-flood recovery efforts in South Hwanghae, North Hwanghae and Kangwon provinces. Not only was the group struck by the damage to cropland and existing stocks caused by the flood, but they also noted the current extent of malnutrition, which would be consonant with the weak summer harvest.

Goodfriends’ North Korea today is once again devoting whole issues (418 and 419) to the food crisis. Some of this is the typical vignette but we were struck by reporting of shortages in the markets and sharp increases in food prices over the course of August. The DailyNK—hardly a fan of food aid—recently ran a story on soldiers raiding corn fields, typically a leading indicator of distress. If the “military first” regime can’t feed soldiers, then there are reasons for concern.

We continue to believe that part of the problem is caused by the Pyongyang and Rason illusion. The regime is showering resources on the capital city—which gets most coverage and foreign visitors—and areas with access to the border trade fare better. The rest of the country—including the rice-growing regions—are faring much more poorly.

So beyond the inevitable political problems, why the delay? The simple answer is that the bleeding hearts could be wrong about how bad the situation is. The Economist has recently given coverage to a paper that contends that North Korea is more rural than is thought. Go Myong-hyun, a statistician at the Asan Institute for Policy Studies in Seoul, has apparently used satellite imagery of crop areas, vegetation and human settlement to challenge UN estimates that over three-fifths of the country is urbanized. That would require every farmer to sustain nearly two city dwellers. Go, by contrast, thinks that urbanization could be as low as 25%, implying three farmers for each city dweller. City dwellers outside Pyongyang might still fare poorly, but farmers survive precariously by reverting to subsistence.

We are tracking down the underlying research and will post on it when we take a closer look. But if the NGO reports from the breadbasket are correct—and in WFP-provisioned areas—Go’s stylized facts do not look so great.

And of course, the ethical issues remain acute. Global Asia has a terrific point-counterpoint between Young-yoon Kim and Nick Eberstadt that outlines the dilemmas. The titles tell all: “Forget the Politics, It’s Wrong to Ignore the Human Suffering” (Kim) vs. “Outside Aid Has Failed: Only an ‘Intrusive Aid” Approach Will Work” (Eberstadt). Even though sympathetic to Kim’ arguments, Eberstadt does an excellent job of laying out the no-nonsense conditional approach that basically says “give the humanitarian community full access to do its work or no aid.” The core of the argument is that in the absence of information, we can’t know what is going on and we should simply not provide assistance in those circumstances.

But we have to ask ourselves whether there are any real signs that things are likely to have improved: the summer harvest was weak; world prices are rising; the Chinese have not shown particular mercy in the past; the WFP is struggling to get support; and those who have gotten out of Pyongyang are not telling happy stories. If anyone can tell us what has really changed over the last few months that would lead to a more rosy assessment, we would like to hear it. In the absence of such information, the arguments we made at the beginning of the summer—and that the NGOs are repeating now—should still stand. 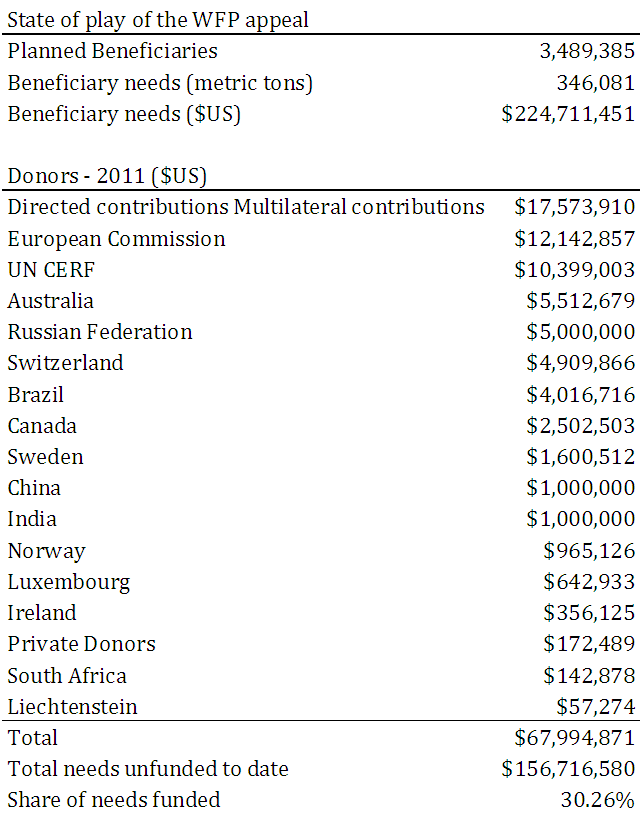 Korea (DPRK) Mission to the UN in New York, a delegation from five US humanitarian agencies

supplies. The five organizations, known as the USNGOs are Christian Friends of Korea, Global

Throughout the visit the team was struck by the severity of widespread malnutrition, especially

There is a significant risk for a far greater crisis to unfold in the coming 6 – 9 months without immediate, direct intervention.

June 20 – August 10, 2011. Intense winds from the third storm caused the collapse of hundreds

roads and railways in what is generally considered the nation’s breadbasket.

On September 2, a 747 cargo plane loaded with emergency supplies was dispatched from the

USGNOs as part of a $3+ million emergency response. The aircraft arrived in Pyongyang late in

the evening on September 3, and was met by the USNGO distribution team (DT) consisting of

representatives from all five organizations. Half of the DT were Korean speakers, and all of the

delegates have been deeply involved in relief and development efforts in DPRK. The DT

monitored the offload, inventory process and staging that evening. On September 4, DPRK

supplies to the targeted areas.

From September 4 to 10, the DT visited nine counties in the three provinces of North

Hwanghae, South Hwanghae and Kangwon. Notably, the county of Sepo in Kangwon Province

reported that they had not received foreign visitors since the Korean War. In all, the team

While this delegation was a part of the USNGO 2011 Flood Relief program, it is impossible to

ignore the precarious food security situation in the DPRK. The lack of food is a constant

backdrop to the post‐flood situation. The deteriorated health conditions from a chronic lack of

nutrition lead to the increased vulnerability of children, pregnant and lactating mothers and the

elderly to the point that they are unable to withstand shocks without becoming ill. In normal

nutritional circumstances, the flooding would not have caused the drastic impact we saw in the

lives of children. The lack of proper food, clean water and medical supplies, has exacerbated

the situation to the point of crisis for many people. The team witnessed children who lacked

the strength to stand on their feet.

DPRK with programs that operate throughout the country. Great effort is made to ensure

quality service and to continually press for acceptable humanitarian standards. In the past 12

months, more than a dozen delegations from USNGOs as a group, as well as each of the

individual agencies have visited, viewed, monitored and assessed the conditions of the men,

women and children of the DPRK.

It is the opinion of the USNGOs individually and collectively that sufficient evidence exists to inform us that a catastrophic situation is developing in regards to food security, severe acute malnutrition and slow starvation.

shortages, poor water, sanitation and lack of medicines for an increasingly growing number of

citizens, combined with shocks such as harsh winters, seasonal flooding and poor harvests, will