An occupational hazard of working on the North Korean food economy is crying wolf. North Korea suffers from chronic food insecurity; this can be seen in the first figure below.  We present two estimates of the aggregate food balances, a measure of the surplus or deficit in the aggregate supply and demand for food. The zero line reflects a circumstance in which the country has just enough cereals from all sources—mostly domestic production, but also imports and aid—to provide all citizens a minimum basic caloric  requirement. As can be seen, the food situation improved after the devastation of the famine, but has generally deteriorated since 2007/2008 if not before. Data we have presented on nutrition shows the stubborn persistence of malnutrition among children. 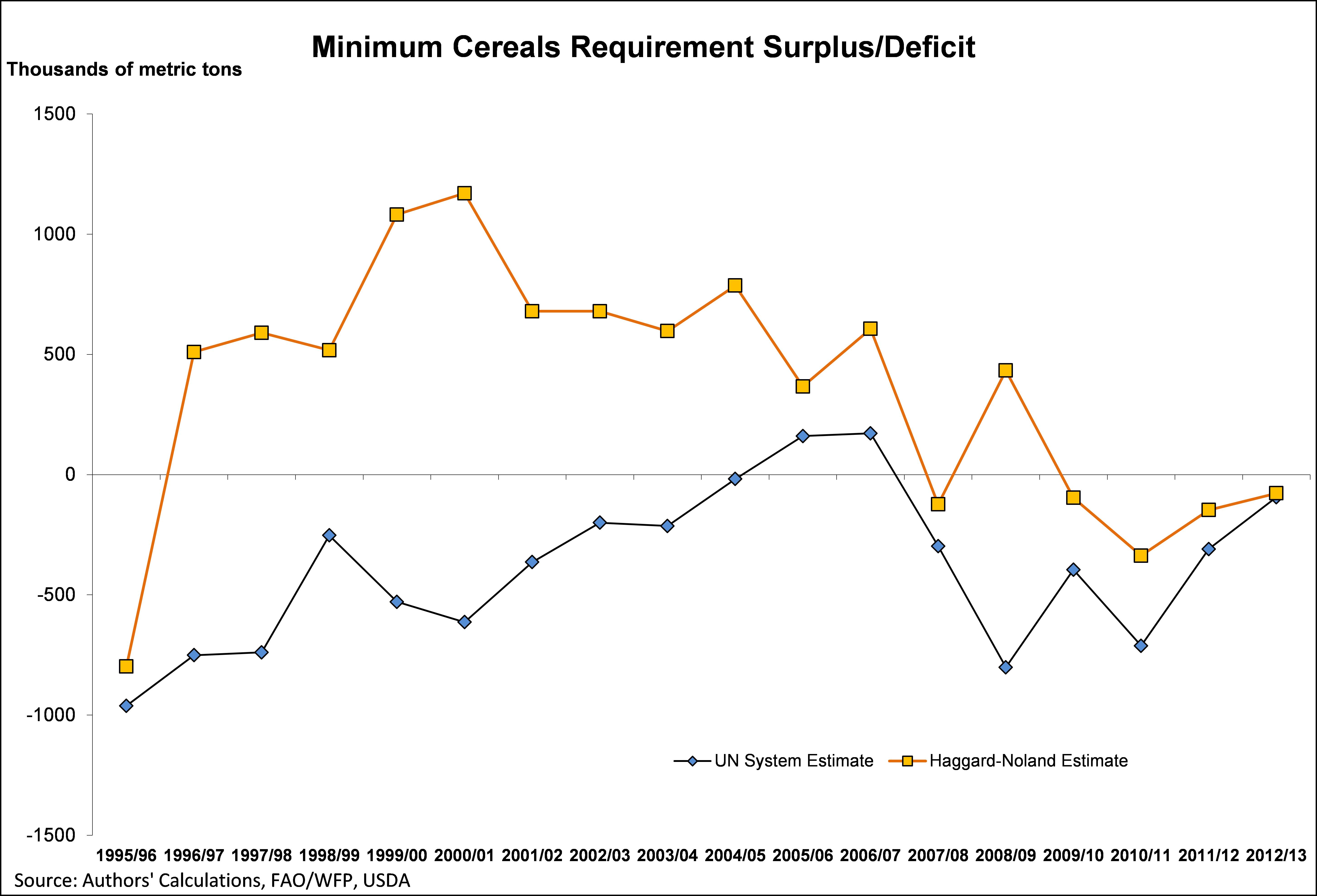 Thus we were quietly holding our breath during the military crisis this spring. The period prior to the summer harvest is the lean season, when the rations distributed to farmers following the harvest are diminishing, prices historically rise and risks of hunger increase. But these risks are compounded by the growing reliance of households on markets for food, which we document through our refugee interviews in Witness to Transformation. When the regime rattles its sword, domestic markets notice: traders and households hoard, the exchange rate depreciates and food prices should rise still further.

Did they? DailyNK now provides regular information on the black market exchange of the dollar and rice prices; the former can also be interpreted as a general measure of inflation, the latter captures trends in the prices of the dominant staple. We have indexed them to 100 for the start of the year and shown trends since.

Prices fell dramatically through January, then rose through February and March as tensions ratcheted up following the tests, with rice prices rising above the January starting point by April 1st.  But since the first of April, prices appear to have fallen dramatically. 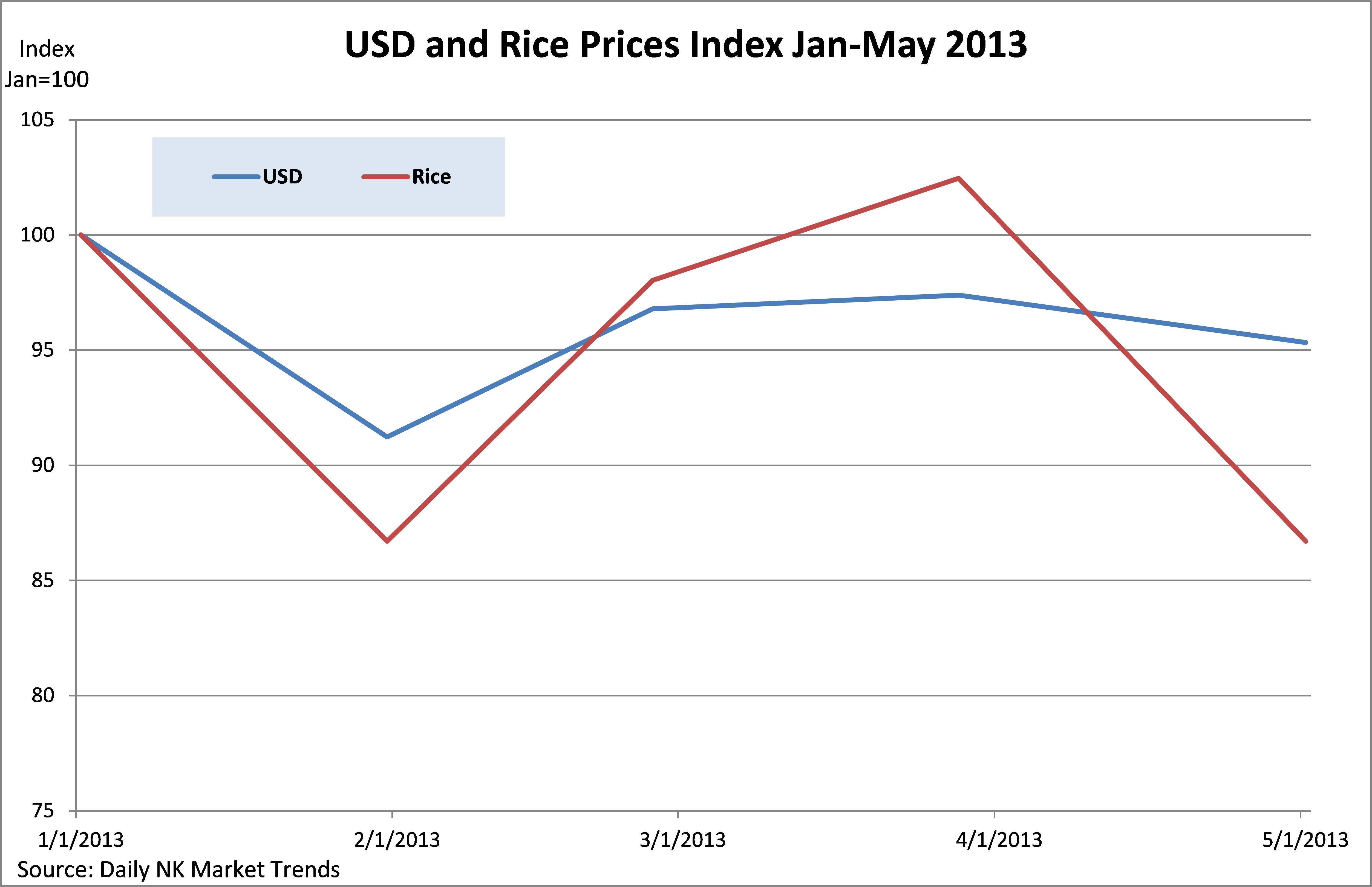 What is going on? Why haven’t the effects of recent tensions been more pronounced given the disruptions of exercises, the closing of markets, and the government’s own claims about rising risks of war? The answer appears to lie in the fact that the regime is releasing food stocks and seeking to regularize the Public Distribution System (PDS); features in New Focus International and DailyNK provide details. The New Focus International story is particularly interesting, because it suggests that the food entering the PDS is coming from military stocks (so-called Warehouse #2).

In a country such as North Korea—where many of the most vulnerable households are in the cities, lower prices are a good thing; farmers are hurt in theory, but they are more likely to have access to food. But it is not clear that these developments are cause for celebration. Past efforts to revise the Public Distribution System--starting in 2005—have often been associated with a turn away from reform. Why?  First, this effort comes in the wake of putting the country on a war-footing and appears to be justified precisely on those terms; as we have argued at length, amped-up emphasis on the military and economic reform do not exactly go together. But there are more pernicious effects. One purpose of strengthening the PDS is to get workers who have drifted out of the state sector back to work. One way of doing this is shutting down markets; the above-cited reports suggest that the regime is once again prohibiting women over 45 from trading.

And finally, the release of stocks does absolutely nothing to address underlying food insecurity over the long-run; it is a stop-gap. The Christian Science Monitor's Robert Marquand, among others, noticed the story that while he was threatening to blow up the US, the regime was simultaneously appealing to Mongolia for food aid. Mongolia as protector? Strong and prosperous country indeed.