Is China Subsidizing the DPRK? Part One: Food

Among the many mysteries of the China-DPRK relationship is the question of how much aid China supplies its neighbor. China publishes no aid statistics, and is particularly cagey with respect to its economic relations with North Korea; there are well-known episodes when Chinese customs went offline with respect to the DPRK altogether.

We have been looking at the pricing of basic commodity trade between the two countries: how the prices of exports and imports compare to world market prices. In doing so, we are following the lead of others, including Nathaniel Aden.

First, the necessary caveats. Such exercises are fraught because no matter how far down you drill into the data—and we went to the eight digit HS level--most trade takes place in heterogeneous commodities. It is hard to know whether the rice, wheat and corn that China exports to North Korea closely resembles standard international benchmarks in quality or not. We are doubtful that it would be superior, but we cannot be sure. Second, as the graphs below show, there are periods when the Chinese customs data—accessed through South Korea’s KITA—does not report any values for its trade with the DPRK in the particular commodity. We cannot say what is going on in those periods. This leads to a third possibility: that China could be underreporting exports and over-reporting imports, hiding an effective subsidy to the DPRK. On the other hand, they could in theory at least be doing the opposite. We just don’t know. Nonetheless, as will be seen, the exercise is highly suggestive. We start in today’s post with food and then move on to fuel and ores.

We start with rice. To give some sense of recent magnitudes, over the last two years of data—2011 and 2012—China exported a total of about 128,000 tons of rice at a total cost of about $74 million; not huge, but not trivial either (128,000 tons is roughly 25% of North Korea's estimated cereal grain import requirement in 2012). The first table below shows the monthly price of rice exports since 2002 against two international benchmark prices: the superior Thai 100% B second grade; and the broken Thai A1 super (both f.o.b. in Bangkok). As can be seen, China’s exports trended between these two benchmark prices between 2002 and 2008, when world food prices spiked. As prices rose, China’s did not initially follow, perhaps reflecting prior contracts. But not coincidentally, data on Chinese exports to the DPRK then vanishes; we cannot rule out that subsidies were extended during this period. But when the data resumes, the tracking of China’s export prices against Thai A1 super is very tight.

We repeat the exercise with wheat. To again give some sense of the magnitudes, for 2011 and 2012, China exported about 270,000 tons of wheat at a total cost of $115 million. This time we provide information on Argentine and two US benchmark prices. The story is largely the same, and the lag in the adjustment of prices is once again apparent before the data disappears. But in this case, when reporting resumes China’s exports prices are higher than all three of the international benchmarks.

Corn tells a similar story, but with one very interesting twist. For some reason, the Chinese did not black out all data on maize prices during the price spike. Lo and behold, those prices we do have tracked world prices very closely during the global food crisis, and ran ahead of our benchmark prices after it.

Our conclusion is that the Chinese are probably not providing any significant food subsidies to the North Koreans. With the possible of exception of the 2008 world price crisis in rice and wheat, North Korea’s dealings in food with China appear to be commercial, and we cannot rule out that they were commercial during that period as well. In fact, it appears that China now charges its “lips and teeth” protégé a premium. This could well be rational given North Korea’s erratic payment behavior.

Several larger conclusions follow. China is not going to take responsibility for North Korea’s food shortages; periods of distress during the history we trace here were not softened by Chinese largesse, at least with respect to prices. Put differently, North Korea is on its own with respect to food. If commercial imports were squeezed by rising prices the responsibility lies with North Korea’s failure to prioritize feeding its population. 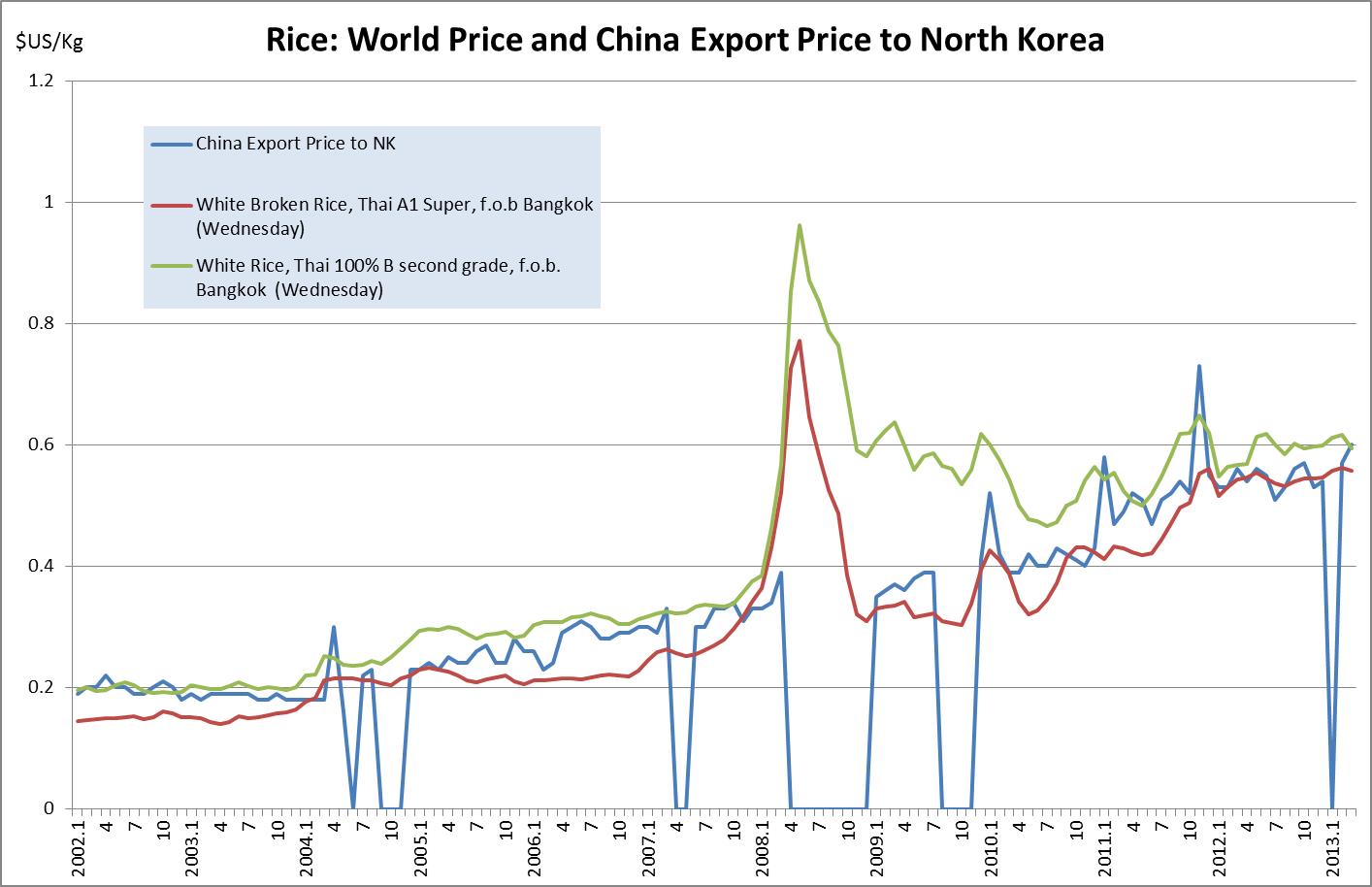 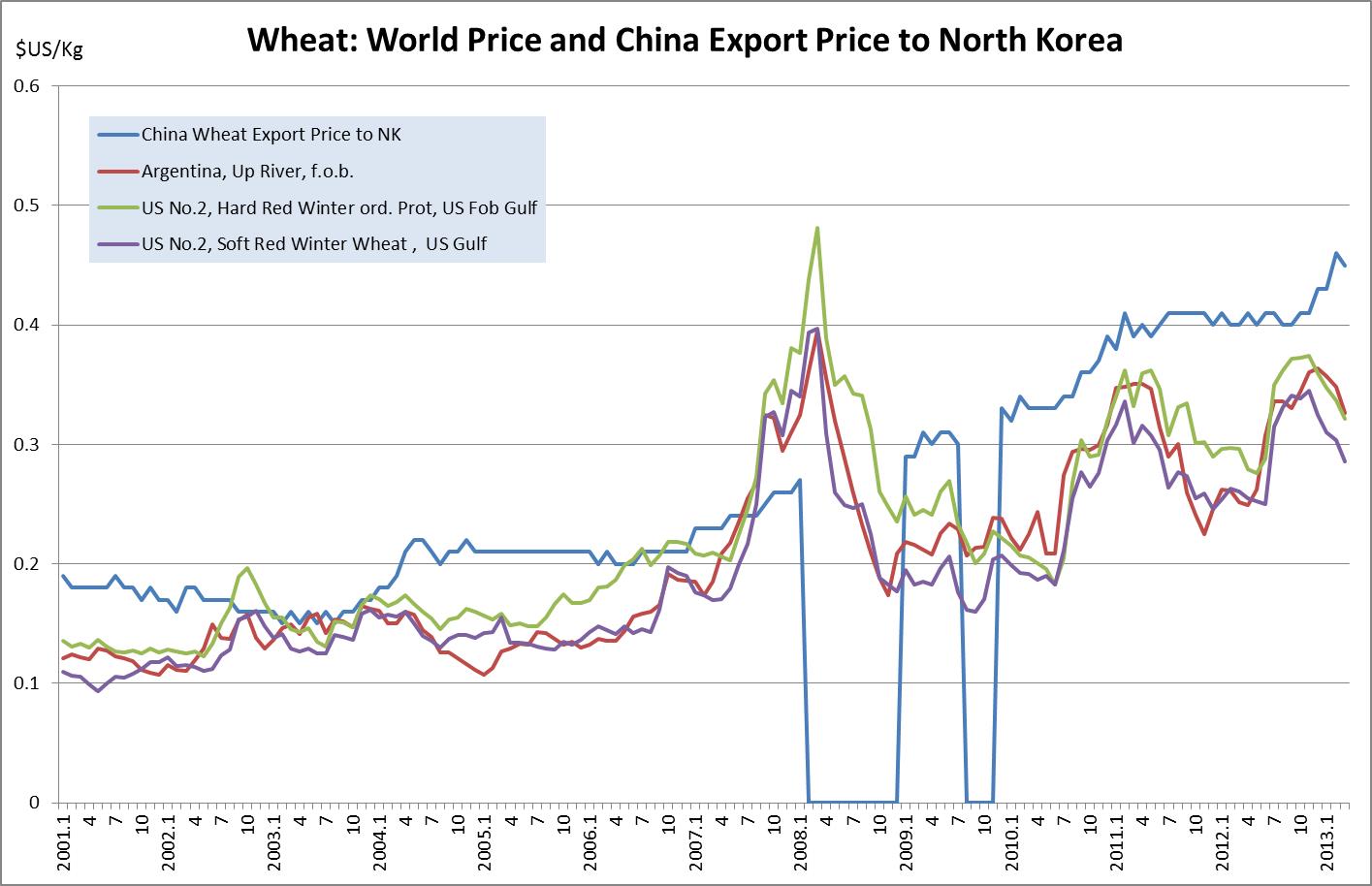 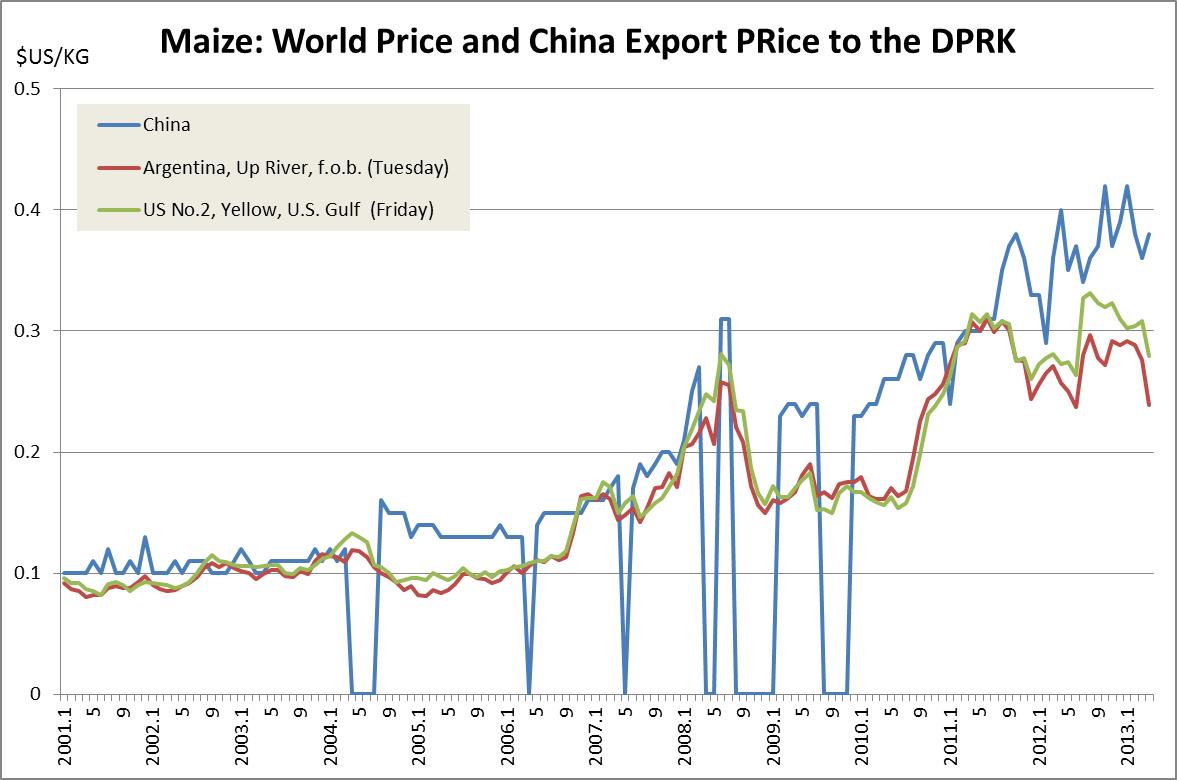 Will Farmers Gain from the New US-China Trade Truce?