China Vitae keeps data on the diplomatic activities of 300 top Chinese Communist Party cadres; Jiahua Yue alerted us to this data and how it might be used to construct a time series on China's diplomatic network. We report on some preliminary findings here.

The data is based on information from Xinhua, Renmin Daily and government websites, and includes extensive details on the time, location, attendees and the purpose of these activities. State visits of Chinese leaders (both in China and abroad), reception of foreign visitors, diplomatic forays abroad and even international conferences in third countries are all included. Moreover, the net is cast widely in terms of the substance of the meetings, which include an ample number of economic visits ("August 30, 2004, Jia Qinglin visited the Hyundai Automotive Group and Hyundai Heavy Industries Co.," etc.).

Although the data aggregates a wide array of officials and types of visits, it also allows us to pull out diplomatic meetings involving Politburo (PB) and Politburo Standing Committee (PBSC) Members, the top political elite in the country.

The first figure below provides an overview of all meetings. From 2004 to 2006, China's diplomatic contacts expanded dramatically and the number of meetings hit a peak, only to fall sharply in 2007 and 2008 before recovering (interpretations are welcome in the comment section below). An interesting pattern is that, from 2009, the total number of connections remained relatively stable but the role of core leaders in the Politburo and PBSC rose steadily, reflecting greater emphasis on foreign policy on the part of the top elite over the last six years. 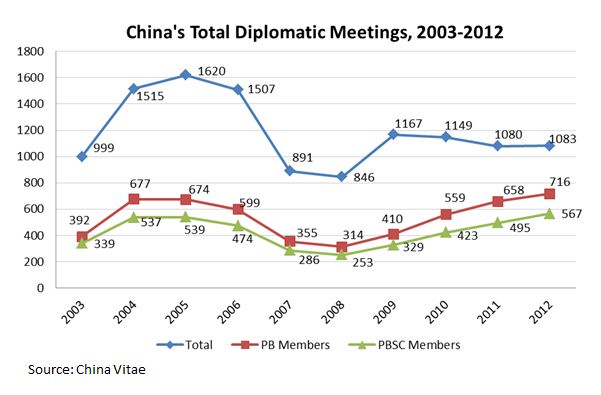 The data can also be used to show the intensity with which China interacts with particular countries. The map below aggregates connections across the entire 2003-2012 period, showing—not surprisingly—that size matters. The US, Russia and Japan exhibit the most intense diplomatic contacts. But we also noticed the surprising attention paid to North Korea over the entire period; for its size, China expends a surprising amount of diplomatic energy on the DPRK, comparable to the density of diplomatic contacts with India, Vietnam and Australia and the major European powers. 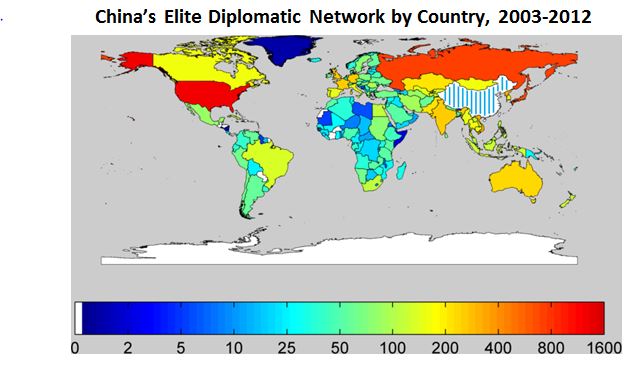 Naturally, we were interested in the details of what was happening in the China-DPRK and China-ROK relationships. Regarding the DPRK, the figure below shows a relatively constant level of interaction from the onset of the second nuclear crisis in 2003, but a fall-off to nearly nothing in 2007, a possible reflection of Chinese pique following the first nuclear test. 2008-2010 show steadily deepening interaction—including contact with the highest level leadership. This trend culminates in the Wen Jiabao visit to Pyongyang in October 2009 and Kim Jong Il's final trips to China in May and August 2010. This is the period of China "doubling down" on its DPRK investment, maintaining and even deepening connections in the wake of the second round of nuclear and missile tests and the sinking of the Cheonan. Thereafter, however, despite Kim Jong Il's last state visit in May 2011, diplomatic contacts fall off in 2011-12. Again, a reflection of pique or a random walk? 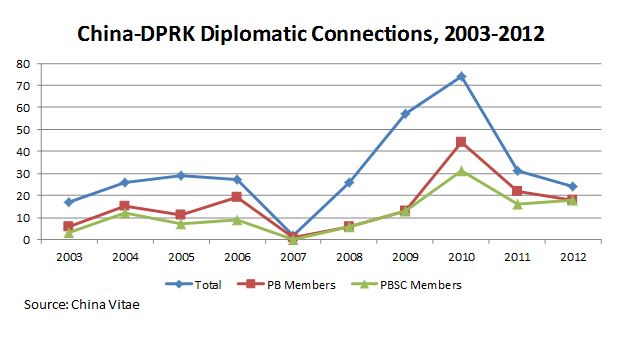 The South Korean pattern is more puzzling given the efforts on the part of both countries to deepen the relationship. But they appear to reveal a partisan pattern with much more contact prior to the election of Lee Myung Bak than after, although relations do intensify in 2011-12 somewhat precisely as relations with the North cool. 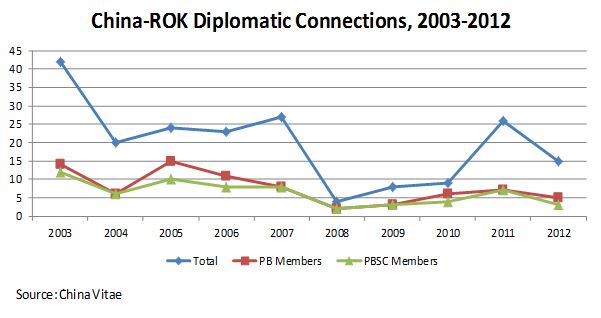 We cannot read too much into this data without closer consideration of the anomalies, such as China-DPRK relations in 2007. Nonetheless, it is useful to bring all tools to bear; comments particularly welcome and thanks to Jiahua Yue for bringing this to our attention.