The Chicago Council Survey of American Public Opinion and US Foreign Policy: Asian and Trade Angles

Given the centrality of alliance and trade issues to the Korean peninsula, this blog is always on the lookout for public opinion data on foreign policy, and not only on the United States (for example, here on Japanese, Korean and Russian views of the Trump administration). Most recently, I discussed a report from the Chicago Council on Global Affairs that I found particularly surprising. Despite Donald Trump's critique of the alliances during the campaign, US support for defending South Korea has actually increased dramatically since a trough in 2010.

This result may be an anomaly, reflecting the clear and present danger posed by Kim Jong Un since he assumed office in 2011. Yet a new, more comprehensive survey from the Chicago Council suggests this result was not idiosyncratic; what is a departure are the fractures within the Republican party on these issues.

Overall, support for our alliances has actually grown since 2015; this can be seen in Figure B below. A general question on confidence in particular countries to deal responsibly with world problems shows that the UK (75% confident), Germany (67%), and even the EU (65%) have larger reservoirs of support than Japan (64%) and South Korea (42%), although the latter seems anomalous and may well reflect confusion between the two Koreas. But confidence in Japan and South Korea have both grown from 2015 to 2017.

Disaggregating the data suggests some strong partisan differences, however. As Figure B shows, the growth of support for alliances is concentrated among Democrats and particularly independents. Moreover, the Republican party as a whole appears to have been pulled by Trump claims. Figure 4 from the report shows views of who benefits most from our Asian alliances. Not only core Trump supporters but all Republicans are much more inclined than Democrats or independents to see Asian alliances as favoring our partners rather than the US. 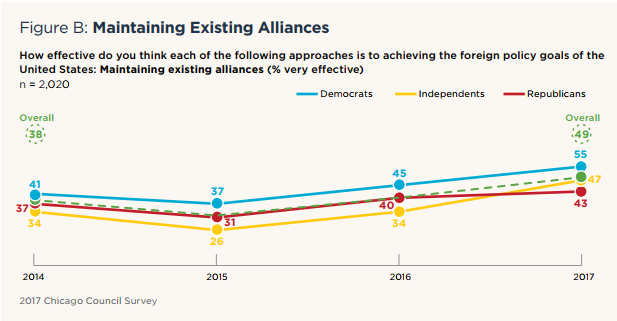 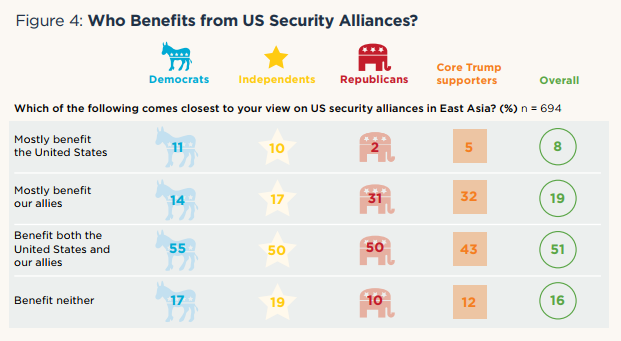 The Chicago Council study also continues to report evidence for what I call the great role reversal: the stunning shift in support for trade between Democratic and Republican voters. First, the overall trends are in line with the data on alliances; despite the campaign and the Trump presidency, overall support for trade has actually grown, albeit with the predictable differences depending on how the question is framed (Figure 8). But underneath the headline numbers, we see large partisan differences and sharper divisions among Republicans and core Trump supporters on trade. The question is posed similarly to those on alliances: qui bono? Only 22% of Democrats and 37% of independents believe trade agreements primarily benefit our trading partners; an outright majority of Democrats (62%) believe they benefit both parties. But among Republican voters, fully 47% believe that other countries benefit more and that rises to 58% among core Trump supporters. 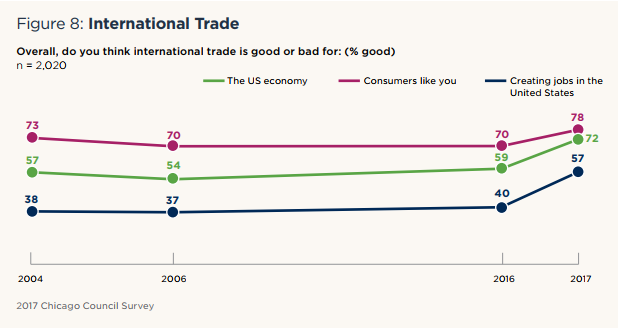 Why is this important? Because it provides information on the political logic of a Trump approach to governing that is bipartisan, that appeals to all Republicans, or that reaches for his core supporters. On alliances, the president would seem somewhat more constrained all around, as even 50% of Republicans believe alliances benefit both the US and its partners. But if President Trump chooses to rule from his base, there is a logic to continuing his lukewarm support for the alliances and his even more tepid support for free trade. Among his base, there is little support for trade agreements and thus more risk that such a governing strategy will run risks with agreements such as the KORUS. This is one case where a political economist is rooting for interest groups such as agriculture and Walmart to steer the trade agenda back toward the middle, with support for free trade coupled with appropriate support for the adversely affected.

The Winter of Their Discontent: Pyongyang Attacks the Market