All that Glitters is Collectable

I've written a bit on the weird world of North Korean collectibles before, but if postage stamps don’t do it for you, how about a shinier option?

Any DPRK watcher knows that the regime loves their award ceremonies and garish medals; we reported recently on the strange case of a Pyongyang traffic cop accepting the "Hero of the Republic" award, and Jang Sung Taek was a regular recipient of the latest and greatest accolades.

Not surprisingly, medals and other such awards have also made their way out of the country and into the hands of foreign collectors. Marc Noland reports that Chinese merchants sell these trinkets – real or otherwise– to tourists along the North Korean border. eBay is also another obvious option for a collector, with most sellers concentrated in China and post-Soviet states. Warren Sessler, a veteran of the Korean War, has even put together a comprehensive (and expensive) guide for the discerning collector that promises to be “the standard reference work for collectors of North Korean orders and medals”.

So, if you've got some money burning a hole in your pocket and you just have to be that guy or gal with the kitschiest North Korea collectibles in town, go ahead and add some of these to the stamp collection. 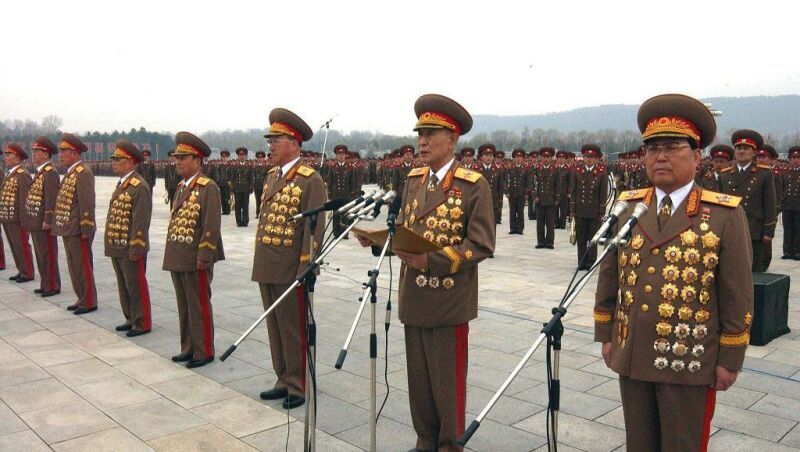 Really funny picture.
And a US-General such as Mr. Petraeus in his dress uniform would fit in quite well with his stickers.

I know Bruce Klinger is a big collector of these, I saw many hanging up in his office before!

Forgot to mention: Sessler (awarded the Silver Star and many other decorations in the Korean War) is well-known in military historian circles. He wrote a very detailed book on Japanese military medals which prompted North Korea to ask him to write a book on theirs. He traveled several times to North Korea for research and showed me the draft of his book. He was also an adviser to many military museums, including one in China (Dandong or Harbin I think).