A World of Known Unknowns: A Closer Look at the Allocation of China's Foreign Exchange Reserves

In the weeks and months following China’s 3rd Plenum meetings and the US government shutdown, there has been a flurry of statements inside China from policymakers, academics, and news media about the need for China to stop accumulating reserves and diversify its massive US dollar assets. However, as was outlined in a previous post, China’s reserves are still growing. And they are growing from an enormous base. Through September they grew at an annualized rate of more than 14 percent, or $351 billion. With such a large stock, changes in portfolio allocation can have very large effects in certain markets. Indeed, it is one main reason why China is such a large buyer/holder of U.S. Treasury securities and will have trouble fully diversifying away from them – it is the only market deep and liquid enough to absorb China’s surplus balances with relatively little disruption. The International Monetary Fund’s (IMF) Currency Composition of Official Foreign Exchange Reserves (COFER) database is the starting point for most estimates of the composition of China’s reserve portfolio, from a currency standpoint. Although China does not report to the COFER database, many analysts have assumed that China invests its reserves in a similar proportion to those countries that do report. This post takes a closer look at a wide range of bilateral data in order to ascertain a more accurate estimate of those holdings.

It is not possible to fully account for China’s reserves with public data currently available as China does not report any allocation and many important foreign countries do not report the sources of inward investment.  Even countries that do report investment sources do not distinguish by type of investor.

As is documented in Setser et al (2009) and Warnock & Warnock (2009), one can get an estimate of China’s official holdings of US assets from the Treasury International Capital (TIC) data. According to the TIC data, China held just over $1.7 trillion in US portfolio assets as of June 2012 (the most recent annual survey data available), or 49 percent of China’s total official foreign assets (see exhibit 1). This is down from 70 percent in 2005 and is about 12 percentage points less than would be implied by the COFER data.

Exhibit 2 shows that most of the US assets held by China are in the form of long-term debt, mainly US Treasury bonds with initial maturity greater than one year, but also a growing amount of government agency bonds.  Equity holdings began to be noticeable in 2007, around the same time China established its sovereign wealth fund.  Perhaps the most striking feature is that recorded Chinese official assets in the United States (the green line) were nearly stable from 2009 through 2012 despite a large increase in total Chinese official foreign assets (the red line).  This is strong evidence of the diversification of China’s foreign exchange reserves and other official assets. To put the effects of this diversification into perspective, if China had maintained its share of US assets at its 2004 – 2009 average, in 2012 it would have held around $2.5 trillion of US assets, an amount nearly as large as the Federal Reserve’s own (pre-QE3) holdings of US assets. It should be noted, however, that the drop in accumulation of US assets reflected in the TIC data may be overstated because it is possible that China held additional U.S. assets in banking centers in Europe and elsewhere that may not report the ultimate beneficiaries to the TIC survey (for more on custodial bias, see FRB 2012). 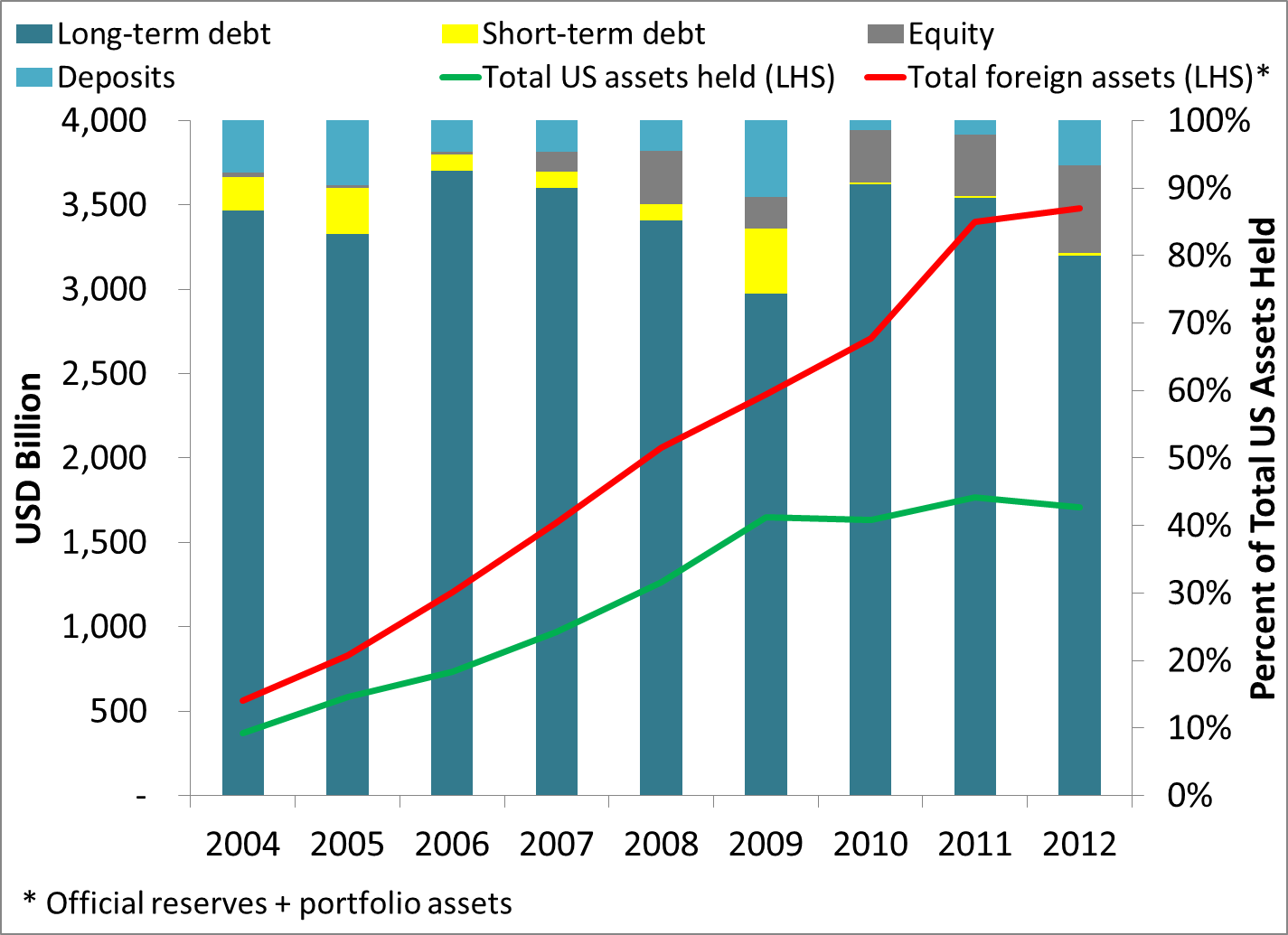 According to the IMF’s Coordinated Portfolio Investment Survey (CPIS) data, as of 2012 China owned $284 billion of Japanese portfolio assets, up from $170 billion in 2010. The increase over this period was largely in short-term debt. This is consistent with transaction data published by the Ministry of Finance in Japan, and statements from Japanese officials voicing concerns about China’s increased role in Japan’s government debt market. These holdings comprise about 8 percent of China’s official foreign assets, considerably more than Japan’s COFER share of 3 percent. Despite the illiquidity of Japan’s government bond market relative to that of the US, it remains one of the few foreign markets large enough to absorb a significant fraction of China’s official foreign investment. 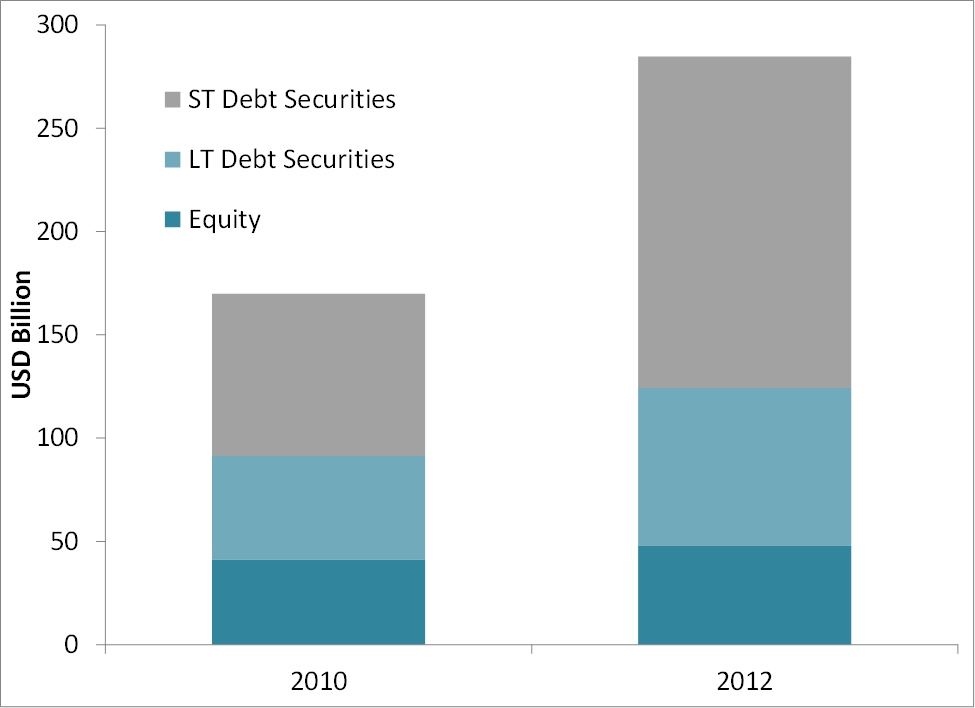 Since 2009, the Financial Supervisory Service in Korea has been publishing foreign holdings of Korean securities. According to its monthly report, China holds about $16 billion of Korean assets as of 2012, up 25 percent from 2011. Korea’s relative macro stability and large trade linkages with China suggest this trend should continue. That said, even if China were to buy up the entire stock of Korean debt (a political and economic near impossibility), it would amount to just 15 percent of China’s foreign exchange reserves, highlighting the difficulty China faces in diversifying its holdings outside of US, European, and Japanese assets. 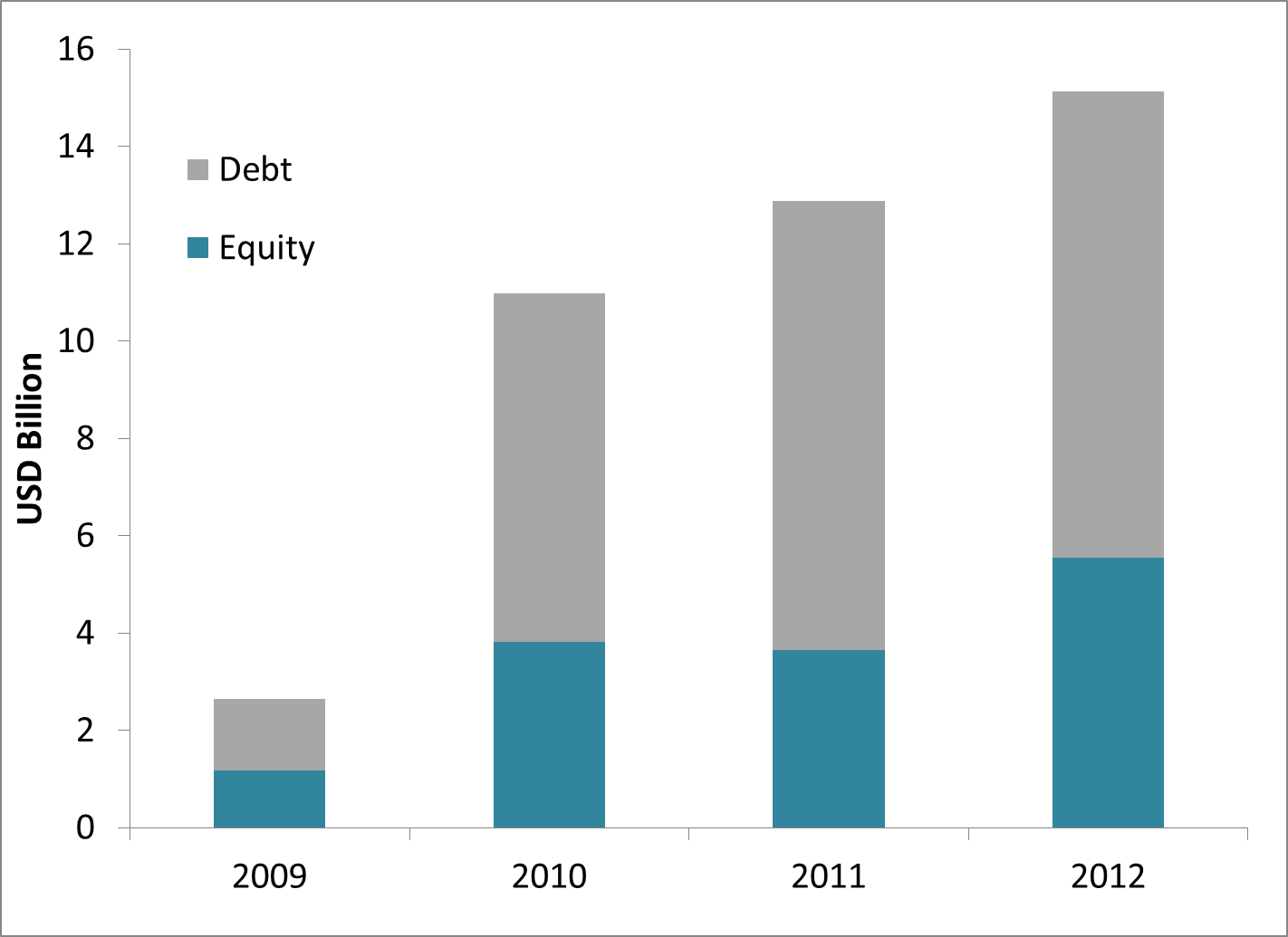 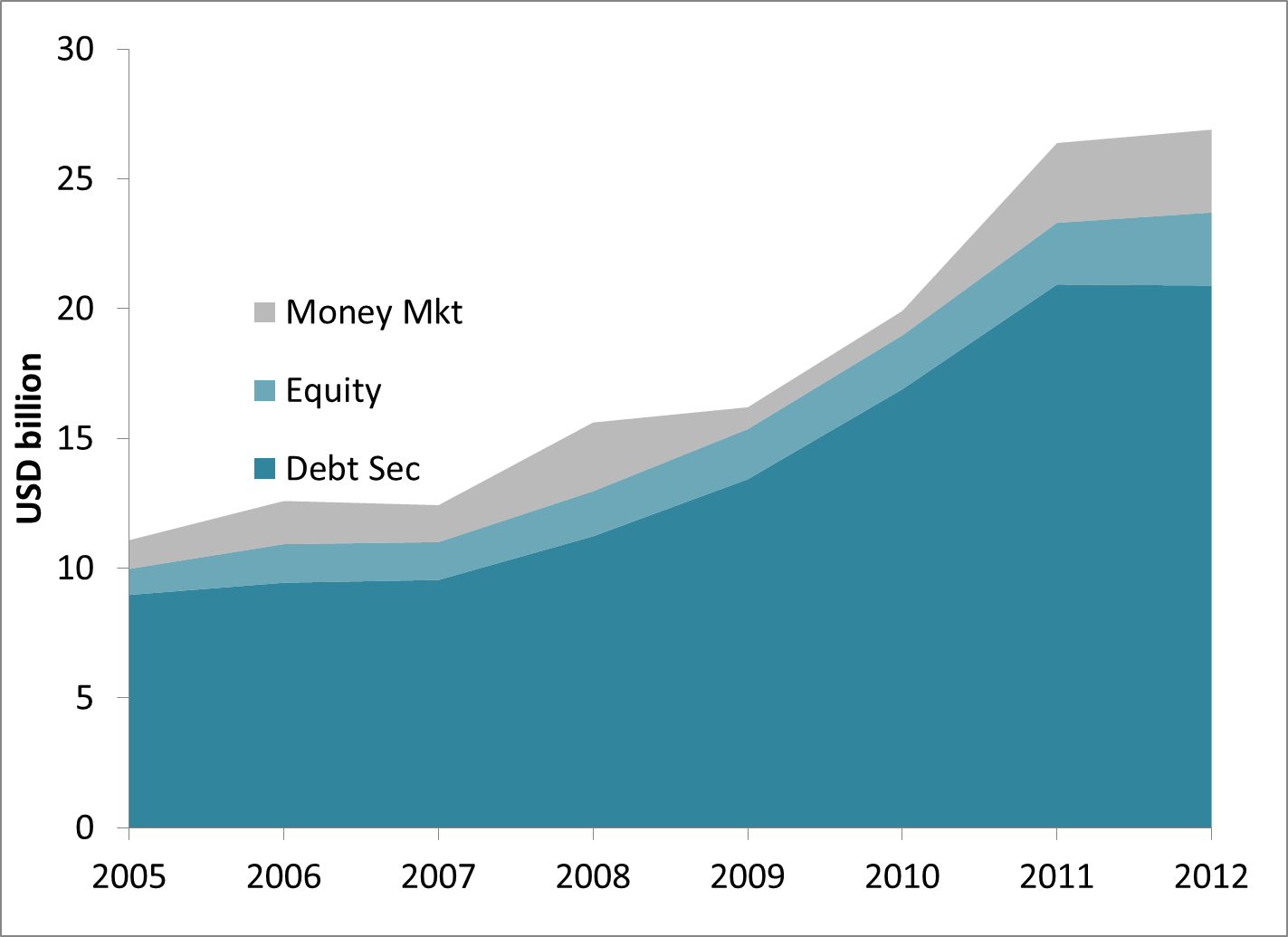 We were surprised by the limited size of China’s portfolio investment into Australia, given the common perception to the contrary. According to data from the Australian Bureau of Statistics, total Chinese portfolio holdings in Australia were only $0.7 billion as of 2012, much smaller than the implied $50 billion from the COFER data. Given China’s large and growing trade linkages with Australia as well as Australia’s relatively well-developed financial system, there is much potential for growth in this market. 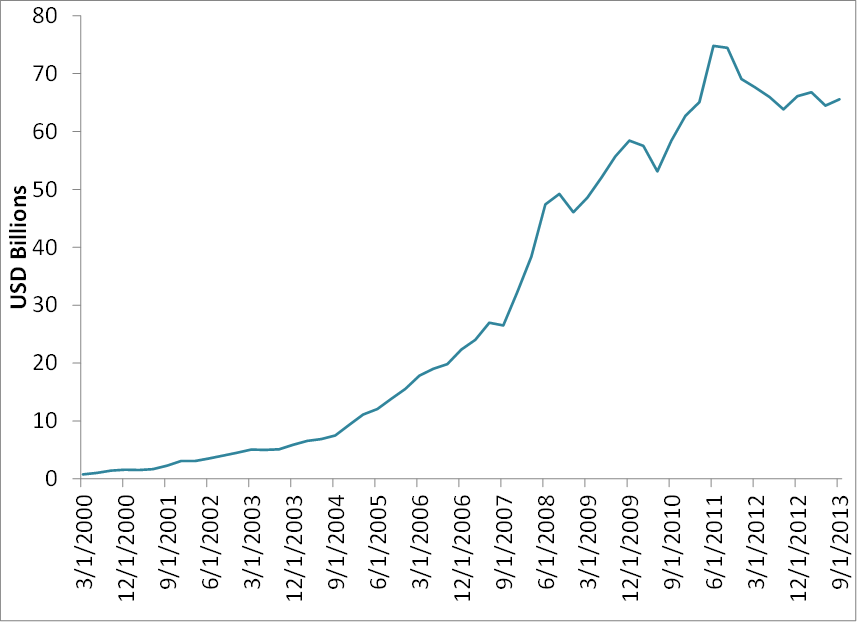 So far we have either directly or indirectly estimated the allocation of approximately $2.1 trillion of China’s reserves, which leaves a large balance remaining unknown. Part of that missing $1+ trillion may be in foreign currency bank deposits, which will not show up in the data shown here. However, China’s other foreign assets (mainly banking claims and liabilities) showed a net claim of only $50 billion at year-end 2012.  By far the largest portion of the missing trillion is likely due to portfolio investment in countries that do not report the sources of portfolio liabilities to foreigners.  The most important of these are the euro-zone, the United Kingdom, Switzerland, Singapore, and the Scandinavian countries. These countries combined have nearly $17 trillion in portfolio investment liabilities (i.e. foreign investment in domestic assets), $7.5 trillion of which is in the euro-zone excluding Germany.

If China allocated its official foreign assets in the same proportions as countries that report in the COFER data, about $900 billion would be held in the euro-zone and $120 billion in the United Kingdom. Given that Germany is the largest member of the euro-zone and has the highest sovereign bond rating among euro-zone countries, the estimated Chinese holdings of $66 billion in Germany seem quite low. This suggests that China may hold considerably fewer euro-denominated assets than would be implied by the COFER shares.

However, one area where China has shown public interest is in the assets of euro-zone institutions. In 2012 Wen Jiabao stated that China would purchase the bonds issued by the European Stability Mechanism (ESM) and the European Financial Stability Facility (EFSF) in order to “continue to support the E.U. economy”. Indeed, according to data released by those respective institutions, there was strong demand from Asia and from official institutions (they do not allocate by country). The amounts are small – ESM has issued long-term bonds totaling €10 billion, EFSF €300 billion – but are indicative an effort by the PBoC to diversify its assets as well as deepen commercial relations with the euro-zone.

1. Diversification. China has increased purchases of Japanese, Korean, and Canadian assets faster than its overall purchases.  Meanwhile, the share of US assets in China’s official foreign assets appears to have declined and a small, but growing share of China’s US assets are in equity. However, there are limits to how much China will be able to diversify away from US assets, owing to factors such as the instability in the euro zone, ongoing tensions with and possible uncertainties in Japan, and the disparate, shallow or illiquid nature of financial markets outside of the United States, the euro-zone, and Japan.

2. Location. There are many  factors that influence the allocation of foreign assets, such as diversification, relative financial market development, cultural similarities, trade linkages, proximity, etc.  It may be surprising that China has relatively few assets held in Australia and Canada, whose currencies are widely traded and whose financial markets are relatively deep. China’s rapidly increasing holdings of Japanese and Korean assets (the latter still being quite small in level terms) suggests that China is deepening its financial ties with its geographic neighbors, as it has in trade and direct investment terms as well.

3. Data Availability. This exercise shows important gaps in international financial data.  It is striking that a country with such large official foreign assets as China reports so little about the disposition of those assets (despite recent efforts to increase data collection on Chinese private investment abroad).  It is also remarkable that many European countries are lagging in their reporting of foreign investments in their economies. It would seem that the ECB, whose Centralized Securities Database already collects security-by-security data on all assets issued by Eurozone entities, would be in a position to publish this data. The recent sovereign debt crisis in Europe should illustrate the importance of knowing who the holders of a country’s liabilities are.

[1] We assume that China’s reserves do not include a significant amount of direct investment.  Some of China’s reserves may be held in deposits at both Chinese and foreign banks, but we believe such deposits are relatively small. China reports a net “other” investment position (mainly banking) of only $50 billion.

[3] Some new outbound Chinese private investment capabilities such as the Qualified Domestic Individual Investors (QDII2) program and the Shanghai free trade zone are not yet operational.