Why Soccer Is a Lot Like the Stock Market In China

The Economist had a great article last month on why professional soccer in China continues to face so many problems. Despite a tremendous amount of interest in the game, Chinese professional leagues have struggled to succeed. Game fixing and institutionalized corruption have undermined belief in the fairness of matches. Fans have become disgusted with the number of scandals and turned away from the sport in large numbers. As a result corporate sponsors have pulled money away from soccer and sent the professional leagues into a downward spiral.

That professional soccer is in a state of decline appears to be a viewpoint widely held in China. What’s interesting is that many also seem to think it provides a window into China’s problems with corruption as a whole. China Daily recently ran an article entitled “Only Surgery can Remove the Tumor from Soccer,” where it explicitly compared extensive levels of corruption in soccer with rampant corruption in other areas of society.

The argument from the China Daily piece rings true; the sorry state of soccer is a good analogy for problems in China’s stock markets. In a rapidly growing country such as China one would expect stocks to perform relatively well. Yet the Shanghai composite index has yet to recover from its 2007 peak and in 2011 stocks ended down almost 22 percent for the year, despite robust economic growth.

The problem is that, like soccer, the Chinese stock market has lost its fans. Ordinary investors have lost faith in the fairness of the market as a result of numerous scandals. Let’s look at a couple of the common problems facing both.

In soccer, corruption comes in the form of match fixing and dirty referees. Poor regulatory oversight and plenty of money in the early days encouraged players and owners to boost their salaries by accepting bribes. Corruption became institutionalized, involving officials of all levels at the China Football Association.

In the stock market, corruption often comes in the form of insider trading and market manipulation. Companies routinely trade non-public information with one another on upcoming IPOs, mergers and acquisitions. Brokers use their inside position to talk up or down prices while secretly taking positions to the opposite. The statistics on the extent of malfeasance in the stock market are patchy and relatively few cases have been tried in the Chinese legal system. Nevertheless, both investors and regulators believe that the illegal practices are widespread and put ordinary investors at a disadvantage.

Corruption in Chinese soccer is not purely a domestic affair. Overseas investigators have exposed several scandals in professional soccer in China. In 2007, Singaporean investigators tipped off Chinese officials to a large mainland match-fixing ring, which has resulted in a string of arrests including a vice president of the Chinese Football Association. The list of overseas scandals has grown since then, involving matches with teams from the United Kingdom, Australia, and Hong Kong, as well as Chinese referees who have overseen international matches.

Similarly, the Chinese stock market has had multiple financial scandals with an overseas connection. Investigators in Hong Kong have helped mainland officials uncover financial and accounting fraud. Chinese companies listed on American stock exchanges have been the targets of short-sellers who claim to have uncovered massive corporate fraud, and the Securities and Exchange Commission (SEC) has cracked down on fraudulent accounting involving Chinese firms.

Withdrawal of Money and Support

Despite tremendous anticipation that China was the soccer market of the future, professional leagues are currently in a downward spiral. Fans have left the sport in droves due to disgust over corruption scandals. Corporate sponsors and television contracts have followed the fans away from the sport. Young athletes are signing up to play organized soccer in fewer numbers due to the game’s negative reputation. 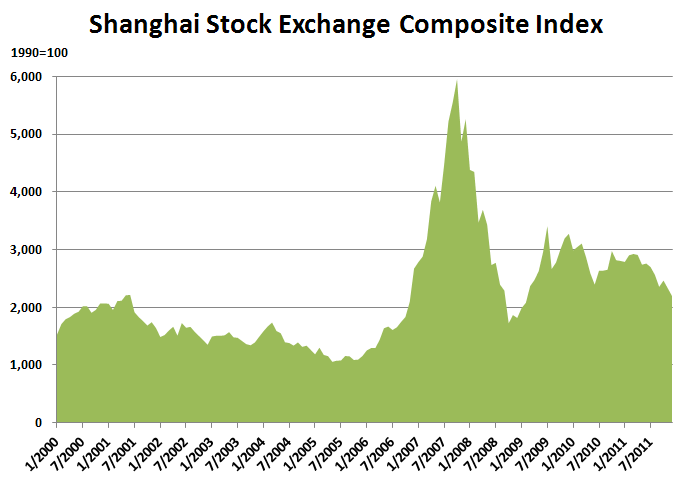 The Chinese stock market has been the subject of equal anticipation and subsequent letdown. Chinese securities markets grew rapidly in the early years, with total market capitalization increasing 116 times in the period from 1992–2006. Yet after a wave of scandals rocked the market, Chinese investors began to turn away from stocks in droves. The Shanghai Stock Exchange has yet to recover from its 2007 high and has ended the year significantly down. Stocks have lost their status as a preferred channel for savings and instead money has flooded into residential real estate.

Chinese soccer has undergone several periodic campaigns aimed at rooting out corruption. Over twenty officials and referees are currently undergoing trial, including the former head referee and several high-ranking officials. These periodic crackdowns are designed to scare offenders back in line. However, absent any major changes to the regulatory structure of professional soccer, the problem of corruption is unlikely to change. Too many cases of corruption are whitewashed away by the China Football Association’s own investigations. Corrupt players and officials will soon return to their old ways once they believe the current anticorruption campaign is over.

China’s stock regulators are prone to similar campaign-style crackdowns on insider trading. Guo Shuqing has started his tenure as head of the China Securities Regulatory Commission (CSRC) by launching a campaign aimed at rooting out insider trading. His efforts are the latest in a long line of attempts to crackdown on the practice. Corrupt brokers and corporate officials will be dragged in front of the courts and handed stiff sentences. Killing the chicken to scare the monkey style crackdowns may work temporarily, but it is not as effective as fundamental change. As long as corporations and individuals know they are unlikely to be held accountable for insider trading, it will continue to run amok.

Despite a tremendous degree of potential, both Chinese soccer and stock markets continue to underperform to an embarrassing extent. Poor regulatory environments have allowed corruption to flourish and convinced fans and investors alike that the system is rigged against them.

Though the problems facing soccer are painful for fans, a dysfunctional stock market is a much more serious problem. Dissatisfaction with the securities market has pushed savers to over-invest in housing and other speculative investments (like Wealth Management Products), and in the process contributed to the growing imbalance in the Chinese economy.

any thought about corruptions in China and in India? similarities and differences?

Sorry, I haven't followed the situation in India very closely. It seems to be quite a hot political topic there right now.