Why China's State-Owned Enterprises Want to Diversify their Business

The fact that China’s state-owned enterprises need to invest outside of their core business activities for higher profits may come as a surprise. In contrast to the prevailing view that state owned firms obtain large rents from a monopoly positions in certain sectors such as oil & gas extraction and tobacco, most industrial segments dominated by state-owned firms are not very profitable compared with industrial sectors with greater private participation. In the first five months of the year, private industrial enterprises had a profit margin of 7.1 percent on their core business in the first five months of this year compared with just 5.3 percent for state owned industrial enterprises. 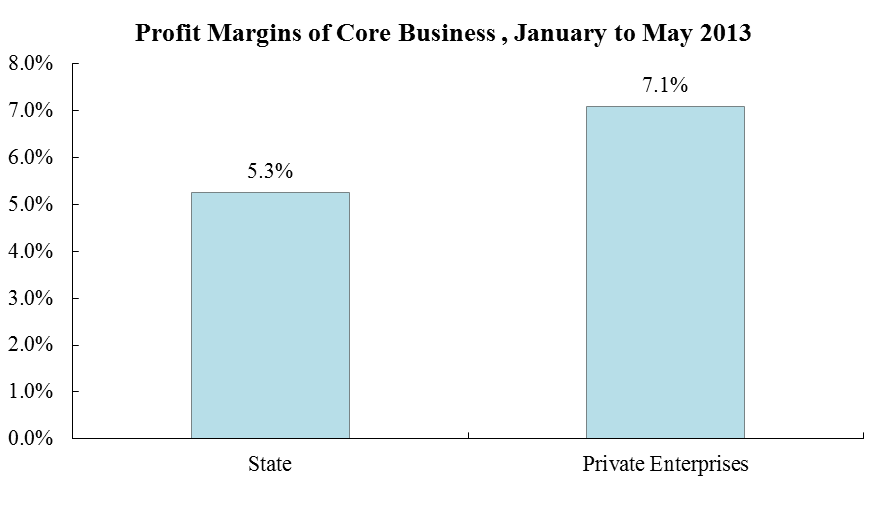 Even non-core profits are not enough to help state-owned firms make-up for the gap in performance in core business activity relative to private firms. In the first five months of this year, the non-core profits for state-owned firms were only Rmb 50 billion, just enough to boost margins up to 5.8 percent still well below the 7.1 percent in the core business of private firms.

State-owned core business profits in the industrial sector are often dragged down by weaker margins in sectors with government control over end-user pricing such as electricity production and distribution, oil and gas refining, and water production and distribution. For example, firms engaged in petroleum refining, coking, and processing of nuclear fuel had profit margins in their core business of 0.69 percent in the first five months of this year. In contrast, private dominated sectors tend to be in less capital intensive and less regulated sectors with higher margins. Food and beverage production – traditionally dominated by private firms - showed profit margins of 8.98 and 11.92 in the first five months of the year respectively.

Some may point to the weaker profitability of the core business of state owned firms as a sign that they are poorly managed. Others would say that state-owned enterprises are simply handicapped by operating in sectors with government price controls. The answer is somewhere in between. Yet it is clear that the days when China could support weaker performance in state dominated industrial sectors are coming to a close. Reforms are needed to make the core business segments of state-owned enterprises more market orientated and competitive.